The Impact of Right to Work Laws

State Republican leaders want to pass such a law. What will be the impact on jobs and wages?

Twenty four of the 50 states have so-called “right to work” (RTW) laws. These laws discourage union membership by prohibiting contracts between private companies and their unions that require employees to pay dues to the union. Often they also prohibit the employer from deducting union dues from workers’ pay.

Republican leaders have proposed such a law for Wisconsin. Given GOP domination of the legislature, it seems likely to pass. Although Gov. Scott Walker has said RTW is not a priority for him, it seems unlikely he would veto it. How will this affect Wisconsin?

In theory, RTW would work by weakening unions, thus depressing wages and benefits. Companies seeking low labor costs would be attracted to Wisconsin by lower wages and benefits, and by a reduced threat of unionization. As a result, Wisconsin’s jobs would increase. A similar argument is made against increasing the minimum wage—that lower wages equal more jobs.

In practice, assessing the impact of RTW on either wages or jobs is very challenging. The RTW states differ from non-RTW states in numerous other ways. Geographically, states with RTW laws largely fall into two groups (1) all the members of the Confederacy and (2) a broad band of states running through the Great Plains and Rocky Mountains. There are no RTW states in the Northeast, none on the Pacific Coast, and there were no midwestern industrial states, until the passage of RTW laws by Indiana and Michigan.

Over the past 50 years, the economic gap between the South and the North has narrowed due to several factors, including the end of legally based segregation, the search for warmer climes facilitated by widespread air conditioning, substantially lower housing prices in the South, the upgrading of southern universities and federal spending concentrated in the South.

The distribution of oil and gas production is another example of a complicating factor in measuring the effect of RTW laws. States like Alaska, Louisiana, North Dakota, Oklahoma, Texas, and Wyoming have gained employment from booming oil production, but that may change with the recent collapse of oil prices. Either trend would have an impact when comparing employment and wages in these states with others.

Multiple regression analysis offers one way to sort out the effect of the RTW laws from the many other differences between the states. The most ambitious attempt I found was published in 2011 by the Economic Policy Institute. It concluded that wages in RTW states were 3.2 percent lower (about $1,500 for a full-time worker), the rate of employer-sponsored health insurance was 2.6 percent lower, and the rate of employer-sponsored pensions was 4.8 percent lower.

For non-unionized workers, the wage penalty was 3 percent, the health insurance penalty was 2.8 percent, and the pension penalty was 5.3 percent. The rate of union membership in non-RTW states was more than double that in the RTW states. Thus the better pay and benefits may reflect the need among employers without unions to compete with unionized employers for workers.

The EPI study’s findings thus reinforce a key part of the economic theory behind RTW—that it drives down overall labor compensation. One possible concern with this study is that the EPI–an ally of unions and opponent of RTW laws—may have missed some factor influencing wages and benefits which, if included, would have eliminated the RTW difference. If so, I would expect to find a critique from one of the many organizations advocating for RTW legislation. So far as I can tell, no such critique has been published.

Instead, advocates rely on comparisons that make no attempt to compensate for factors other than RTW. An example of how this works is included in the most recent Rich States Poor States authored by Arthur Laffer, Stephen Moore and Jonathan Williams and published by the American Legislative Exchange Council. It compares the economic performance between 2002 and 2012 of the RTW Midwestern states–North Dakota, South Dakota, Iowa, Nebraska, and Kansas—with that of the “forced unionization states”–Illinois, Indiana, Michigan, Ohio, Wisconsin, Minnesota, and Missouri.

But the economies of the two groups of states are very different. The RTW states are heavily agricultural. The 2002-2012 period was a very good one for American agriculture, with net incomes doubling in real terms. In addition the RTW group includes North Dakota whose booming oil industry allowed it to far outperform any other state. By contrast the non-RTW group was heavily industrialized during a period when manufacturing employment nationally dropped by 24 percent.

Testing the second part of the model—that lower labor costs lead to more jobs—runs into the same problem of trying to isolate the effects of RTW from other differences between states. Again, advocates of RTW solve this problem by ignoring it. For example, they conclude that the Midwestern states with RTW grew more because of RTW, not because they discovered a new source of oil or were heavily agricultural at a time when farming did very well. 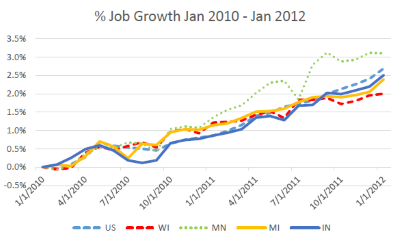 In theory one could approach this issue by looking at states that passed RTW and compare jobs before and after the law took effect. But one must be careful that some other change happening within the state does not explain any change in jobs.

And in the past decade only Indiana and Michigan passed RTW laws—both in 2012. When Indiana was considering its bill, the state chamber of commerce published a paper arguing that RTW would have led to higher employment and compensation, mostly based on growth rates from 1978 to 2008. As with the Laffer report already mentioned, this paper made few attempts to account for other possible causes for differences in the period it used.

My first chart shows Indiana and Michigan job growth between the January 2010 when jobs started to recover from the recession and the start of 2012. For comparison, I added US, Wisconsin and Minnesota job growth, During this early recovery period, job growth in Michigan and Indiana slightly bested Wisconsin’s and almost equaled national growth (although Minnesota was the Midwestern standout). 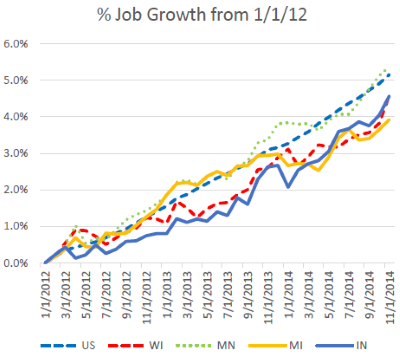 My next chart tracks Indiana and Michigan jobs starting in 2012, when they passed RTW legislation. If anything, they fell further behind national job growth and that of Minnesota, which continued as the regional star. The safest conclusion is there is no evidence of a positive effect on jobs from their adoption of RTW.

It could be argued this comparison does not allow enough time for the Indiana and Michigan RTW laws to have a positive effect on jobs. Can we look to other states? The problem is that no other state has passed RTW legislation since Oklahoma did so in 2001. Since then Oklahoma’s manufacturing employment dropped 17.7 percent. Would it have dropped even more without RTW? Hard to say. In the same period, Wisconsin, without RTW, saw its manufacturing employment drop by 16.9 percent.

Perhaps because the evidence in support of RTW as a job creator is so weak, its advocates fall back on a faux-libertarian ideological argument, casting themselves as worker advocates. This is reflected in the name they have chosen. However, right to work laws give no one a right to a job. Rather, the laws ban employers from signing agreements that require workers to join or pay for unions. In the tug-of-war between capital and labor, they move the balance of power in the direction of capital.

In advocating for RTW, the economist hired by the Indiana Chamber of Commerce condemns “governmental constraints on individual employment bargaining.” But that phrase perfectly describes what RTW does: it’s a government constraint on the ability of private parties to negotiate a contract. As a commentator at a libertarian journal commented, “If employers choose to conclude union-shop contracts with unions, what gives the Indiana legislature the right to interfere?” Similarly the editor of the libertarian publication Reason argued, “The ideal role for the government in business-labor relations is to stay the hell out of it and let the parties work things out themselves.”

An analogy might be passing a law banning mandatory condo association fees. That law would likely spell the end of condominiums, by allowing individuals to enjoy the benefits of the association without paying for them. In economics, this is known as the “free rider” problem that plagues a range of social goods and services, including actual free riders who take transit lines without paying for them. RTW discourages unions by introducing the free rider problem. If a majority of employees decide that union representation is worth paying dues, under RTW they have no ability to limit the union’s benefits to those willing to pay.

When all is said and done, however, it’s notable that union membership has been declining throughout the private sector in states both with RTW and without. Too often work rules in unionized companies make them less innovative, which can mean they lose market share, shrinking the number of jobs at that company.

A recent Milwaukee Journal Sentinel article by Alan Borsuk noted that the number of students in conventional Milwaukee Public Schools had shrunk over the years even as enrollment in choice and charter schools, including those authorized by MPS had increased. This means that the proportion of teachers represented by the MTEA had been steadily declining even before Act 10 kicked in. Over the years, as a member of the school board I voted to authorize a number of so-called “instrumentality” charter schools. These are charter schools that employ members of the union. In the end, most of them have closed. One factor in the failure of unionized charter schools has been that hiring rules under the labor contract made it difficult to pick staff who were committed to the unique mission of the school. In essence, the union rules served to strangle its most entrepreneurial members.

On an occasion when I visited the MPS’ “Urban Waldorf School,” I discovered that the sole remaining Waldorf-trained teacher was on sabbatical. Soon after the school changed its name and then closed.

The challenge for the labor movement in the 21st Century is to find ways to encourage rather than discourage innovation and market responsiveness within a company (or school, etc.) that is unionized. Failing to do so is likely to lead to continued declines in union membership, regardless of the fate of RTW legislation.

19 thoughts on “Data Wonk: The Impact of Right to Work Laws”