Plus lots of soccer. And cider. And the best DJ night in town.

Have you ever looked at a calendar and wondered, “What the heck is Boxing Day?” Well, according to the drink menu at Highbury Pub (2322 S. Kinnickinnic Ave.), it’s a holiday tradition celebrated in the United Kingdom and all her former colonies the day after Christmas when servants and tradesmen would receive gifts, known as a “Christmas box,” from their bosses and employers. Today it’s a banking holiday. For my sister-in-law, who hails from London, England, the traditional Boxing Day meal is something called “Bubble & Squeak,” which includes all the leftovers from Christmas mashed together, made into patties and fried like a burger. (Sounds yummy, right?) For the British, and soccer fans across the globe, Boxing Day also means a full slate of English Premier League, with all 20 teams in action.

A great place to capture the spirit of soccer on Boxing Day, and to drink on the cheap, is the Highbury in Bay View. Voted a best soccer pub in America by SiriusXM FC, Highbury opens at 6 a.m. on Saturdays and 7 a.m. on Sundays for EPL viewing and features a 6 a.m. to 10 a.m. happy hour. It includes $5 20oz taps, $3 tall rails, $2 domestics, and $1 ginger brandy shots. During the week they open at 1 p.m. and have a standard happy hour that runs from 3 p.m. to 7 p.m. (with the same deals).

Owner Joe Katz, a veteran of the Brady Street bar scene who had grown tired of the business, bought the Cream City brick building on KK in 2004 as a tile studio and gallery for his sister. She ended up pregnant and married to a doctor and he was left with the building. Plan two became the Highbury Pub, a soccer-themed bar with a decorative tile motif, including elements of Mexican hacienda style. Katz has also added large pieces of graffiti art to the walls.

Highbury refers to the home stadium (1913-2006) of London-based Arsenal Football Club, allegedly the Queen’s preferred team. I stopped into the pub on Monday afternoon as Arsenal was facing off against powerhouse Manchester City. It was packed with Arsenal fans, including the official Milwaukee Arsenal Supporters Group, and Katz was behind the bar. When I asked Katz how he became an Arsenal fan he replied, “I’m not, I’m a Crystal Palace supporter. And I made the mistake of wearing a Manchester United jersey to the first Arsenal-ManU match here.”

“But it’s an Arsenal bar,” I replied.

“Everybody shows up here,” Katz insisted.

Fair enough. Supporter scarves from all over the world hang above the bar, yet there’s no denying its Arsenal-inspired name, color scheme and pieces of art. I’m guessing it has something to do with the fact that the last time Arsenal won the title (going undefeated) was 2004, the same year Highbury opened. During Arsenal matches there is an electric atmosphere, with the supporters group chanting and Katz offering deals on almost anything. Plus, there’s free snacks. But if you grow even more hungry while at Highbury, Katz conveniently has a stash of local menus perched above the left end of the bar.

To compliment their worldly décor Highbury offers over 80 beers and ciders from all over the globe. Twenty ounce rotating taps usually run $6.50 and bottles and cans are between $2.50 and $9. This week on tap they have Guinness, Pilsner Urquell, Surly Hell and Karben 4’s Fantasy Factory (my current favorite pale ale). There are warm drinks to enjoy on an early weekend morning, like a Hot Toddy ($5), Irish Coffee ($7.50), and something called “Magic Coffee” ($7.50). Their bloody’s ($7.50) are big and bold, and on Monday mine came with a large pretzel on the straw. They also have a “Cran-Mosa” ($8), made with cranberry cider and champagne.

Tuesday night trivia is popular at Highbury, with $1 PBR cans from 6 p.m. to close. On Wednesdays they have $5 Old Fashioneds and $5 off bottles of wine. Thursdays is $5 tall Stoli cocktails and Mondays is specialty cocktails “made with extra love.” If you’re a pumpkin beer fan, Katz has Lakefront and Southern Tier’s on special. Other recommended drinks are Buffalo Sweat Vanilla Bean Stout ($6), Surly Coffee Bender ($6), Erdinger Dunkel Hefe-Weizen ($7), Bell’s Oarsman Sour Ale ($5), Ciderboys Grand Mimosa ($5) and Not Your Father’s Ginger Ale ($5).

There’s never been a better time to be an English Premier League fan as NBC Sports now carries all games on their cable network and mobile devices. The story lines this season have been crazy, with the reigning champions Chelsea slumming it near the bottom of the table and recently promoted unknowns Leicester City at the top. Highbury is currently involved in another best soccer bar contest through NBC Sports and social media, using the hashtag #BestPLBarContest. This Saturday’s lineup will include a 9 a.m. clash between Liverpool and Leicester City, an 11:30 a.m. matchup between Newcastle and Everton (featuring team USA’s goalkeeper and a star of the 2014 World Cup, Tim Howard), and the “headliner” at 1:45 p.m., when Arsenal takes on Southampton. Highbury will also be open Christmas Eve for you holiday hooligans. And following the soccer matches on Boxing Day they will host a Festivus party, making it their biggest day of the year.

In addition to soccer, Highbury Pub is known for arguably the best DJ dance night in the city: “NEEDLE2THEGROOVE” with JDL, THA DMT, and DJ Bizzon. On Fridays (and the occasional Saturday) these DJs spin an infectious mix of old school hip-hop, funk, soul and R&B. It might seem strange that the city’s best dance night is at a small-ish soccer bar in Bay View, but for two years now it’s been true. Speaking of hip-hop, if you’re looking for something to do later on Boxing Day, swing by Riverwest Public House for my 5th Annual Holiday Hip-Hop Benefit, for which I’ve partnered with Arte Para Todos and Freespace, arts organizations benefiting youth.

And here’s to music, art, charity, sport, cheap drinks and celebrating the holiday season with those you love. 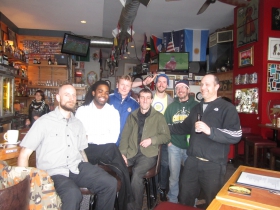 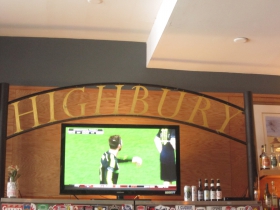 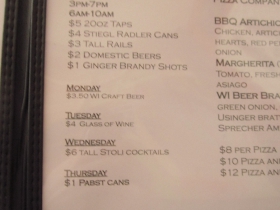 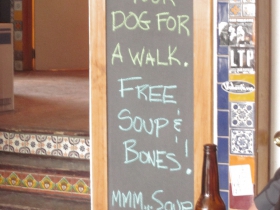 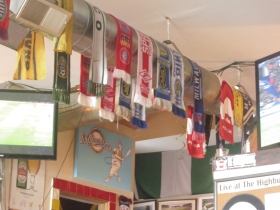 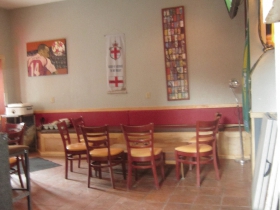