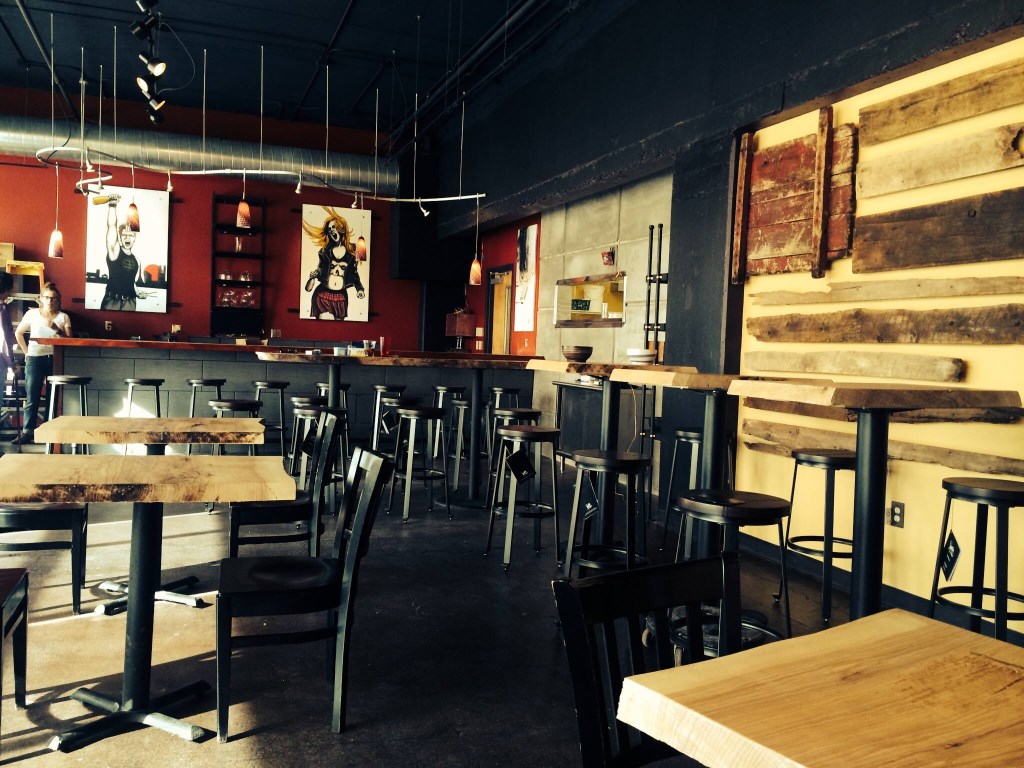 Shorewood ramen restaurant Tochi reopened last week Monday at its new location at 705 Village Green Way in West Bend to the delight of many fans of the original restaurant. Owner and Chef Gregg Des Rosier told the Business Journal he is taking a “real punk rock” approach to both the location and the menu. Not clear why you need to be in West Bend to go punk (maybe they just discovered it there), but the new Ramen offers both traditional and experimental fare on the menu, including the popular TOCHI ramen with miso broth, pork belly, crispy pork, green onion and spicy miso deviled egg ($11.95); Wisconsin ramen with miso mustard broth, brat, caramelized onions, pickle relish and dehydrated kraut ($9.95); and new options like the grass-fed beef mazeman with shoyu broth, grilled flank steak, pickled shiitakes, green onion, fried egg and smoked bone marrow butter ($12.95).

Udon and rice dishes like the cilantro lime Vietnam catfish ($9.95) and sweet chili tofu ($8.95) are also available. In addition, there will be appetizers like the brat stickers, a unique take on the familiar pot sticker with brat sausage, kraut, cabbage, onion and mustard sauce ($6.95). Rosier also told the Business Journal he is also experimenting with a “late-night ‘Japanese bar food’ menu.” According to the Facebook page, all of the restaurant’s pork, beef and chicken is “locally sourced. Natural. Free range. No gmo’s. Sustainable. Ethical. Environmentally sustainable.” Nothing punk about that.

The restaurant is open Monday through Saturday from 4 p.m. to 9 p.m. Take out is also available.

When we last covered the Beerline Café, a brand new, eco-friendly café and restaurant specializing in vegan, vegetarian and gluten-free food, they were in their soft opening. But according to OnMilwaukee, the café and restaurant will be hosting their official grand opening on Friday, Nov. 20th at their location at 2076 N. Commerce St.

The celebration will feature food and beverage samples as well as discounts on menu items. New menu options for sweet and savory crepes, breakfast tacos, “Cromelettes” (omelets cooked like a crepe — that’s a new one on us), fresh juices and smoothies will also be available. Guests at the grand opening can also take a peek at the brand new dining room complete with a large living wall filled with nearly 2,000 tropical plants.

Would it be a new Elsa’s we wondered, in a March story  about Karl Kopp’s mysterious plans to open a new restaurant at 100 E. Seeboth St.in the Fifth Ward.  The owner of Kopp’s Frozen Custard in Greenfield, Brookfield and Glendale as well as Elsa’s on the Park, was widely presumed to be working on some big venture in the historic J. L. Burnham Building at 100-106 E. Seeboth St. – which is owned by 100 E. Seeboth LLC with Kopp serving as the registered agent. But those plans — if they existed —  have now died a sudden death.

According to BizTimes, Kopp was issued an order last week Monday to tear down the building within 30 days. Although Kopp’s plans to redevelop the building were approved by the Milwaukee Historic Preservation Commission in June, it was discovered during the renovation process that the interior walls were more deteriorated than anticipated. Ron Roberts, manager of the city’s condemnation department, told BizTimes that there were concerns about the building’s stability and efforts were being made to make it more stable, but the floors have collapsed and the interior walls were damaged.

The would-be restaurant in the 140 year old, 11,430 square foot, two-story building was expected, according to plans filed by Kopp, to have a 4,200-square-foot dining area with seating for lots of restaurant-goers and a courtyard near the entrance, plus offices and a conference room on the second floor. Not going to happen. So what will Kopp do with the land the building sits on? The mystery continues.

We reported on the Chicago-born Rosati’s Pizza when they were in the process of obtaining their Class B Tavern License and Food Dealer-Restaurant License as they moved into the spot at 2238 N. Farwell Ave. Now it looks like the restaurant got its way because, according to OMC, it not only opened last week Wednesday but is also proudly serving a variety of foods and drinks.

Sports fans are in luck as there are 30 flatscreen TVs, we kid you not, to take in every touchdown or grand slam from every possible vantage point in the place.

Point Burger Bar, which was planned to open last week Wednesday, opened yesterday. The bar and restaurant’s opening was pushed back due to construction delays, as reported by the Journal Sentinel.

OMC reports that the Las Vegas-styled bar and restaurant, located at 10950 W. Good Hope Rd., is a collaboration between owner Brian Ward – who also owns Ward’s House of Prime – and Stevens Point Brewery. Chef Thomas Peschong, corporate chef for Ward’s and former chef at Turner Hall and the Riversite in Mequon, designed the menu.

The bar and restaurant is serving quite a selection of burgers, including a lamb burger with feta, red onion, tomato and tzatziki sauce ($13.45) and a duck burger with 5 spice powder, caramelized onion and orange gastrique ($14.95). A “build-your-own-burger” option is also available, allowing guests to pile on any combination of Prime Angus beef, bison, turkey, salmon, chicken, Portobello mushroom, veggie and more along with a drizzling of exotic sauces like tapenade, truffle aioli, bourbon bacon jam, horseradish cream and even peanut butter.

The bar and restaurant is also serving entrees including a skirt steak with fries and a vegetable ($17.95), shrimp skewers with lemon garlic butter, rice and veggies ($14.95), char-grilled salmon with basil tomato and Kalamata relish with rice and veggies ($15.95) and a huge chicken pot pie ($13.45). Appetizers include homemade tater tots – both plain and poutine style – fried pickles, cheese curds, sweet roasted garlic hummus, onion strings with Sriracha mayo, mozzarella sticks and Bloody Mary gazpacho shrimp cocktail all from around $7 to $11.

Brews made by Point Brewery will take up 25 of the 30 taps, but the bar also serves over 60 varieties of bottled brews and spirits. Also offered are spiked shakes made with housemade custard in 12 different flavors such as the Salted Caramel Brittle with peanut butter, salted caramel and two shots of Jameson and Frangelico. Fifteen non-alcoholic custard shakes will also be available.

Got your cowboy boots and lucky rabbit’s foot? The country rock inspired Jack Rabbit Slims is opening Dec. 5th at 8028 W. National Ave., according to OMC. Christopher Surges of Rumor Upbeat Lounge is serving as owner, Bill Deuberry, formerly of Yield Bar, is serving as general manager and Lisa Keefer, formerly of Puddle Jumpers in West Allis, is serving as chef.

The restaurant features southern and Cajun favorites including Memphis-style pickle chips ($7.50), chicken and cabbage-stufffed Cajun dumplings ($7.50) and Texas Twinkies — jalapenos stuffed with cream cheese and smoked brisket wrapped with bacon and deep fried ($7.50). If that’s not artery-clogging enough, then you can also dine on a Black Angus patty with four ounces of smoked brisket, muenster cheese, bacon and onion jam with a side of Bourbon gravy ($13.50) or a Fatboy with a pound of smoked pork, ham, bacon, pulled pork, BBQ sauce, slaw and a pickle ($14.50). Platters of brisket, pulled prk and smoked corn beef as well as meatloaf, fried chicken and salmon will be served as entrees with sides such as garlic mashed potatoes and corn bread for $12 to $17. Soups and salads are also available for those looking for, well, lighter fare.

Francisco Mohamed hopes to bring the food of Venezuela to Waukesha with a new take-out restaurant known as Arepanitas at 145 E. North St., according to Waukesha Now.

Mohamed plans to offer food from all over Latin America, most of which comes from his experience cooking for restaurants in Venezuela and Spain. Planned items include pabellon criollo – a plate of rice and shredded beef with stewed black beans – a classic Cuban sandwich and more.

The owner hopes to open in early 2016. Not only does Mohamed still need to get a permit from the city, but he also needs to make heavy modifications to the building – which is shared with the Fox River Sports & Spas shop. The space doesn’t even have a kitchen! It was previously owned by Annie Lou’s, a children’s resale store. Despite the significant changes that need to be made, community development specialist Jeff Fortin told Waukesha Now that “Aside from the work and permitting that it takes to convert the space into a restaurant, I don’t see any issues or concerns with a small restaurant using that space.”

The Uncanny Soup Company, located at 612 N. Water St., is closing its doors for the last time “after much thought and emotion,” they announced last week Thursday on their Facebook page. They closed the restaurant in order to “pursue other interest. [sic]” They also suggest going to the Coffee Bean right next door on 624 N. Water St. as some of their soups will be served there.

“So sorry everyone. It had to be,” the restaurant said in its announcement post. “Just couldn’t make a go of it in that location.”

The announcement came two days after they were having “a paperwork issue with the city” due to the owner forgetting to send in the check for the restaurant’s license. They said that “Until we get the green light, we’re going to be on a non-scheduled vaca[tion].” It is unknown whether this issue is related to the closing of the restaurant.