Three parts of the city get new restaurants. And two popular bars are closing. 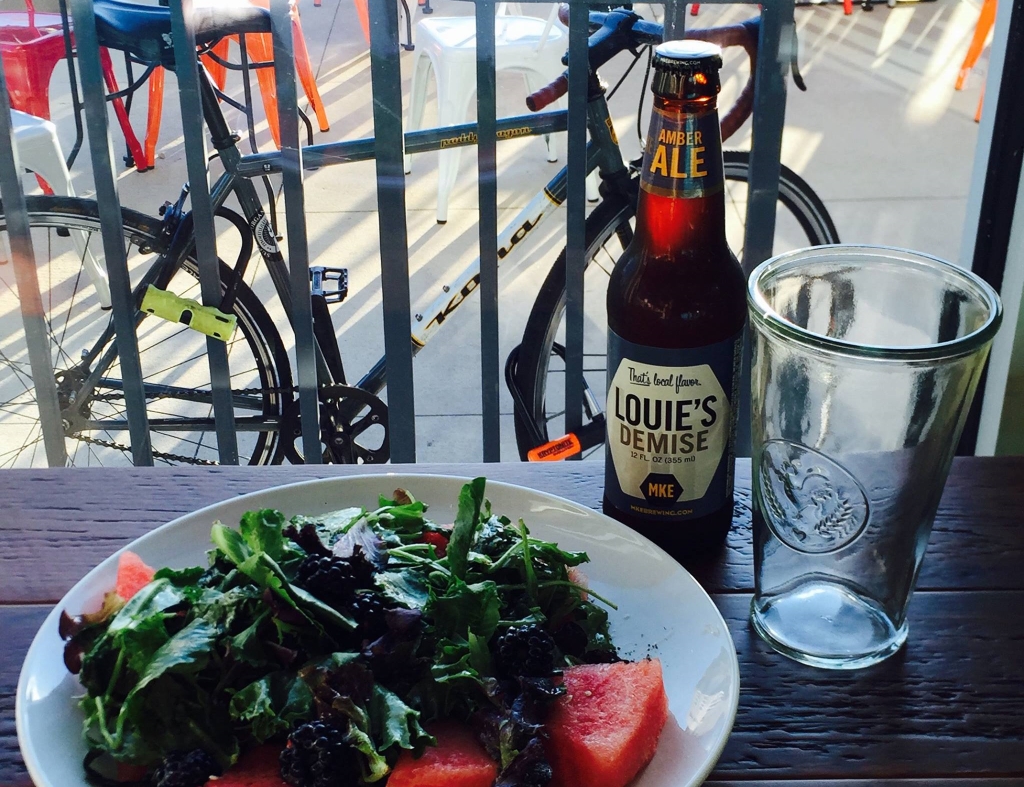 Are you frustrated that you cannot find any good vegetarian, vegan or gluten-free restaurants in Milwaukee? Beerline Café has all three covered. The eatery, located at 2076 N. Commerce St., is currently in its soft opening according to OnMilwaukee.

“I actually worked at Café Manna [in Brookfield] for three years specifically so that I could work up to opening the café,” owner Michael Allen told the publication. “I used to travel for work a lot, and I took note of all the creperies and cafes around the U.S. I loved them and really wanted to bring that concept back to Milwaukee.”

You can sample both savory and sweet crepes along with salads, panini, soups and bakery items. Beverages include coffee drinks, juices and smoothies along with bottled beers from Lakefront, Sprecher and Milwaukee Brewing Co. Truly a place with everyone in mind. My suggestion? Have anything with “PB&J” in the title.

The café is also proud to have a three-star certification from the Green Restaurant Association, which is apparent from the LED lighting, energy star kitchen appliances, multiple waste and recycling bins, water saving mechanisms and a 200-foot living wall.

The café plans to officially open sometime in October and will have long hours: 6:30 a.m. to 10 p.m. daily. Both dine-in and carryout options are available, with delivery coming soon.

The food truck turned brick-and-mortar restaurant will hold its grand opening today at its location at the corner of S. 11th St. and W. National Ave., according to OnMilwaukee. Owner Natalio Perez launched the business in autumn of 2014.

“It was always Natalio’s dream to open his own restaurant,” Five O’Clock Steakhouse managing partner Stelio Kalkounos told OnMilwaukee. “Being family owned and operated ourselves, it is an honor to lend our support [to] the Perez family as they expand El Comedor from a food truck to a thriving business.”

The restaurant specializes in Oaxacan cuisine, featuring steak, chicken and chorizo tacos and tortas along with burritos tostadas, sandwiches and soups straight from the southern state in Mexico. The restaurant also features a breakfast menu with huevos rancheros and omelets.

El Comedor Restaurant will be open daily from 6 a.m. to 10 p.m. Check out the restaurant’s Facebook page for more info.

A new Asian restaurant plans to open later this fall at the former home of Classic Slice at 1660 E. North Ave., according to OnMilwaukee. The building is being renovated as we speak.

Iris Huang, who owns the new restaurant along with her family, told Onmilwaukee they have been serving Americanized Chinese food for years, but want to use the new restaurant as a catalyst to serve more authentic fare. Items include ramen noodles, rice dishes and bubble tea.

The Brass Alley and Evolution Milwaukee

The Brass Alley and Evolution Milwaukee, which we covered in late August, will both open to the public this Friday, Oct 2nd, according to OnMilwaukee.

The Brass Alley is inspired by open-air “alleyway” restaurants in New Orleans. Executive chef Jeff Beale has prepared a menu filled with Louisiana staples like po’boys filled with grilled andouille sausage, Abita glazed onions and creole mustard ($10); red beans and rice with smoked turkey and grilled andouille sausage ($13); jambalaya with choice of shrimp, chicken or seared scallops ($12-$16) and more. Beverages include beer, wine and creative takes on the Sazerac, French 75 and other cocktails.

Evolution Milwaukee is a ping-pong themed entertainment venue formerly located in the Third Ward. Beale is also preparing the menu for Evolution Milwaukee, which features new sandwiches, salads and pizzas. Small bites, such as truffle butter popcorn ($4.50) and pretzel balls ($6.50), can be enjoyed as well. Evolution will also feature new ways to play, including “Cosmic Pong” where black light and glow-in-the-dark ping pong games are played after 10 p.m.

After trying and failing to be a part of the Brady Street neighborhood, Camp Bar is moving into the Historic Third Ward. The Journal Sentinel reports that the Northwoods-themed bar will move into the building at 525 E. Menomonee St., the former home of Chili Lili’s. A liquor license has also been filed and will come before the Milwaukee Common Council on Nov. 3rd.

Owner Paul Hackbarth told the paper that after Brady Street turned away the bar, he and his team received multiple offers from different neighborhoods to house Camp Bar. Noting the Third Ward’s many restaurants, Hackbarth said the neighborhood had few places that are bars only, so a straight-up bar “would complement everything really nicely.”

Hackbarth also noted that Camp Bar will not become a bar chain. “In fact, this is likely to be the third and final location here in Milwaukee,” he said.

Camp Bar will open in the Third Ward in late winter or early spring. The bar is also located at 6600 W North Ave. in Wauwatosa and 4044 N Oakland Ave. in Shorewood.

Is Camp Bar a good fit for the Third Ward? Give us your take in our comments section.

The project will transform the building into the new home for Pabst Brewing Co. The first floor will become a micro-brewery and the upper floor will become a restaurant and tasting room, becoming a meeting place for beer lovers once again. The project will also fix up the roof, windows, masonry, paint, doors, walls, interior and the missing buttress bases on the east side of the building. The empty lot in the back will be replaced with a 2,300 square foot patio as well as a two-story, 800 square foot addition to the building for housing a prep kitchen, elevator, bathrooms and storage.

The project costs $4 million and is expected to create around 122 new jobs. It is planned to open sometime next year.

The feast, developed by new chef Jason Bucher, allows guests to choose which course options as well as which beer or wine paring they like. For the fourth course, for instance, you can either have a potato-wrapped salmon with parsnip puree, caramelized brussels sprouts, chive coulis and watercress; chicken schnitzel with red cabbage and spinach mashed potatoes; curried beets with farro risotto or pork tenderloin medallions with mushroom bread pudding and greens braised in hard cider.

Buckhead Saloon, located at 1044 N. Old World 3rd St., opened for the last time this past Saturday after 10 years of business. The popular bar combined a party atmosphere complete with DJs along with a cozy lounge areas and a patio along the Milwaukee River. According to the party bar’s website, the owners will be opening a new concept in November of this year.

“Thank you to all these amazing 10 years of staff that made Buckhead what it was,” said the bar on its Facebook page. The bar also encourages patrons to keep checking the Facebook page for updates.

On Sunday, Sept. 20th, The Hamilton closed after almost five years of business, as reported by OnMilwaukee.

The cocktail lounge opened in 2011 at 823 E. Hamilton St. Owner Kimberly Floyd saw potential in the old building and decided to remodel it to fit her “vision of a wine salon inspired by female sommeliers in the 1700s,” as originally reported by OnMilwaukee. Eventually, it was styled as a “faux hotel lobby”.

Floyd described her bar as “upscale, but in a more relaxed way. More of a cross between Louis XV and blue jeans.” The bar offered drinks from “affordable to pricey” to make everyone in the neighborhood feel welcome.

Floyd told the publication she’s going to travel before heading back to Milwaukee.

“Thank you to everyone who supported The Hamilton over the years,” said Floyd. “It was a lot of fun.”

Any favorite memories of The Hamilton or Buckheads? Share your thoughts with readers.