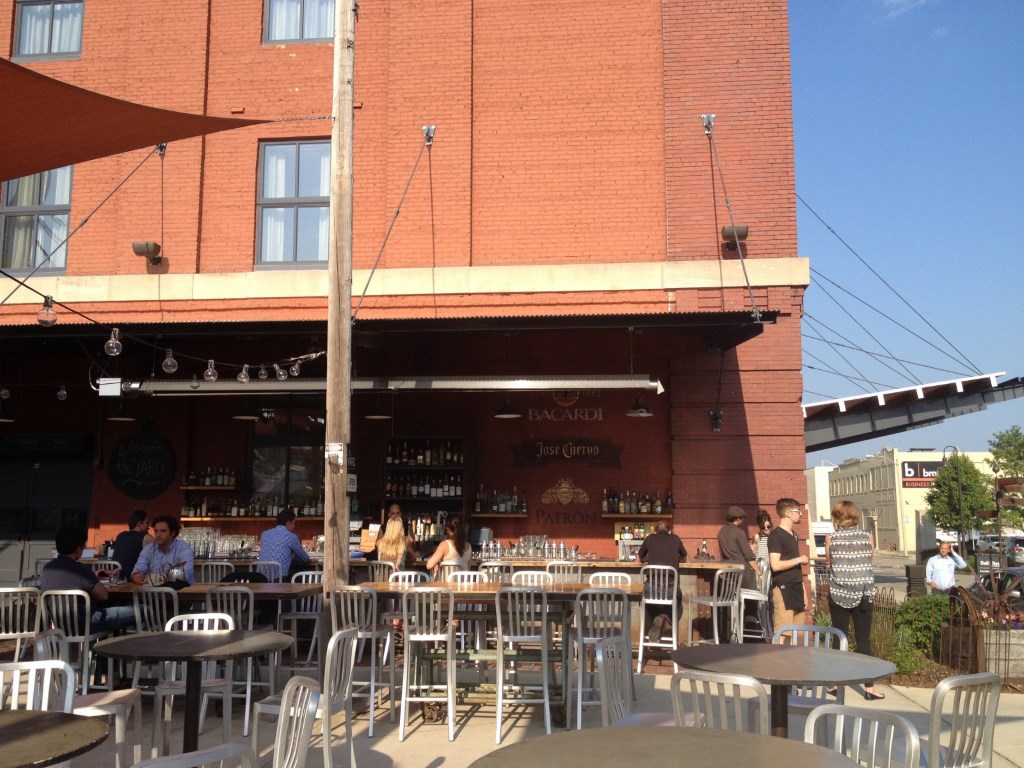 The Yard at the Iron Horse Hotel. Photo by Joey Grihalva.

All good things must come to an end. As the days get shorter and colder, Milwaukeeans are reluctantly preparing for the bitter winter. But it looks like The Iron Horse Hotel isn’t going down without a fight.

According to a press release, the luxury hotel, located at 500 W. Florida St., is hosting an end of summer bash to celebrate its seventh anniversary. The public party is this Thursday, Sept. 17, from 7 p.m. to 10 p.m. and is being held in the hotel’s outdoor patio area known as The Yard.

All guests will be gifted with a Champagne flute for the Champagne toast kicking off the event. There will also be a pig roast and, of course, birthday cake. Also available is the Lucky Number Seven Menu, featuring entrees such as a brat with fries, spicy German mustard, red cabbage, and crispy onions for only seven dollars. There will also be drinks available, including Tokyo Mule, a concoction of Rehorst Gin, sake, lemon, simple syrup and ginger beer.

DJ Jordan Lee, host of 88.9 FM Radio Milwaukee and the director of the hotel’s in-house music program, will be the official Music Curator for the party, so there will be plenty of great tunes to dance the night away.

We reached out to the hotel’s general manager Michael Falkenstein via email, and he confirmed that everyone is welcome to attend the party regardless of age. However, you need to be 21 and older with a valid photo ID to partake in the Champagne toasts and receive a flute. He also confirmed that there are no reservations or sign-ups of any kind. For more information, you can contact The Iron Horse Hotel at (414) 374-4766 or visit their website.

Setback For The Return of Pabst

The owner of Nomad World Pub and co-founder of Lowlands Group Mike Eitel decided to pull out of Pabst Brewing Co.’s plans to build a small brewery and restaurant at The Brewery, the former Pabst Brewing Company complex, according to a press release. Eitel wanted to hold back a bit so he can focus on his bar and restaurant brands.

“I absolutely love the project and the people working on it, but I have informed the group of my decision to focus my attention and my energies on my two current brands,” Eitel said in the release. “It was a difficult decision, but in the end I think it’s best for all parties involved.”

The brands in question are Nomad World Pub at 1401 E. Brady St. and Panga Bar and Grill at 34422 Delafield Rd. in Oconomowoc. Both establishments are expanding locally with renovations in 2016. Eitel, who owns the brands along with his wife and partner at Belair Cantina Kristyn Eitel, hopes to grow the two brands into other markets in the future.

The Nomad brand has already expanded in early June with Nomad Boardsports, a compliment to Panga Bar and Grill that currently offers rentals of SUP boards and kayaks. The couple plans to add retail sales, lessons, and even move into a stand-alone location.

Eitel recently cancelled the planned expansion of the Nomad World Pub after finding out that it would be too expensive. “The scale of it just didn’t match the site or the trade area so we’ve gone back to the drawing board-at this point it’s a clean piece of paper,” said Eitel.

“I’ve had about a year to try to figure out what’s next in life, what my passions are, and what I can realistically handle as I strike out to basically start all over again-it’s kind of like how I felt after graduating from undergrad,” said Eitel.

“After leaving the operations of Lowlands, getting remarried, and opening Panga with my Wife, the idea was to take the foot off the gas pedal just a wee bit-this is a chance for me to actually follow through on that idea,” he added.

Budweiser is not going to be the only beer company to feature a stallion. Because on April 23, 2016, Westallion Brewing Co. (currently called Stallion Brewing Co. because the trademark is not yet finalized) will officially open. According to OnMilwaukee, it will be West Allis’ first brewing company.

Owners Erik and Kim Dorfner decided to strike out on their own after their long history with brewing. Kim is the event planner at Best Place at the Historic Pabst Brewery. Erik became “obsessed” with beer due to the lack of good options when he was stationed in Japan and Iraq. He also worked for Lakefront Brewery as the warehouse manager and in production.

“I came home [after being discharged from Iraq] and took on home brewing with a vengeance,” Erik told OnMilwaukee, “I started entering contests and I placed in every one. That gave me a lot of confidence.”

The couple will open the brewery in a 6,000-square foot facility at 1825 S. 72nd St. and will feature a beer garden and tasting room along with the brewery.

The brewery will start with eight different beers, including both German and British style beers as well as seasonal ones. They’re also trying to recreate beers whose recipes were lost to the German Beer Purity Law, or Reinheitsgrebot, which restricted the ingredients used in brewing beer. They plan to place their beer in liquor stores and 10 bars in West Allis, and hope to expand to more bars.

The brewery will launch a crowdfunding campaign on Monday, Sept. 21. Check their Facebook page for updates.

OnMilwaukee reports that Milwaukee’s annual Cocktail Week is taking place this week from Sept. 16th to the 22nd. During this time, restaurants all around the Milwaukee area will be serving cocktail dinners from classy to casual.

Check out the official website for a full list of restaurants and their cocktail dinners and to make reservations.

On Sept. 23, come to either Bacchus at 925 E. Wells St. or Joey Gerard’s at 5601 Broad St. in Greendale for a night of wine and dining, according to the Milwaukee Journal Sentinel.

Joey Gerard’s will be hosting a four-course dinner with Mary Bergin, author of the recently released “Wisconsin Supper Club Cookbook”. Joey Gerard’s recipe for steak Diane is in the cookbook. The dinner is $55 a person or $100 a couple and includes a wine pour and a copy of the book. Call (414) 858-1900 to make reservations.

A new modern supper club, fittingly titled Supper, will be opening at the historic Shorecrest on 1962 N. Prospect Ave. The restaurant, which owner Gina Gruenewald describes as “Great Gatsby meets 2015”, will have a welcoming, old-school supper club atmosphere with a modern twist.

“Supper is really built for someone who loves the concept of the classic supper club, but wants to eat in a more modern way,” Gruenwald told OnMilwaukee. “Ultimately, in a scene filled with small plates, I just really miss old school dining.”

The restaurant’s menu is being developed by Supper’s executive chef, Erik Hansen, who has worked at the University Club, Distil and Hinterland. Entrees include supper club staples like steak Diane and trout almondine as well as contemporary dishes like rack of lamb and salmon with seasonal veggies. Menu options will also include vegan, vegetarian, gluten-free and dairy-free options.

Something sure to turn Wisconsinite’s heads is the “Everynight Fish fry”, where beer-battered cod, crispy potato, creamy slaw, tartar sauce and apple butter will be available every night.

You can’t have supper without beverages, and Wolf Peach beverage director Erich Wilz is poised to offer a variety of fun drinks from cocktails and wine to Wisconsin craft beer and ice cream drinks.

Supper will soft-open on Oct. 31, the same day as the third anniversary of the opening of Gruenewald’s other restaurant, Wolf Peach. The restaurant will then officially open on Nov. 2.

Patrons of the shops at Bayshore Town Center may want to leave their white shirts at home because the outdoor mall is getting another greasy restaurant. Chubby Cheesesteaks, also located at 2232 N. Oakland Ave. and 2147 Miller Park Way, will be moving in next to Trader Joe’s at 430 W. Silver Spring Dr.

The establishment will hopefully be open on March 1, 2016. It will be open daily at 9 a.m. serving all manner of breakfast, lunch and dinner options including the titular cheesesteaks. General manager Jessica Kreidl told OnMilwaukee that they’re hoping to have the place open till 2 or 3 a.m. if the city permits.

Kreidl also said that the owners hope to open in four other area locations and expand the business to the west coast in 2016. Long live the Chubby’s Cheesesteaks empire!

Honeypie Café and Palomino owners and siblings Valeri and Adam Lucks have started their own wholesale bakery business known as Honeypie Bakeshop, according to Milwaukee Magazine. The business made their first deliveries of blueberry cream cheese muffins and Super Lucky granola bars to all three of Anodyne Coffee Roasting Co.’s locations at 2920 S. Kinnickinnic Ave, 224 W. Bruce St. and in the Milwaukee Public Market at 400 N. Water St. They also made deliveries of cookeis and savory hand pies to Fuel Café at 818 E. Center St.

Colectivo’s next step from coffee shop to restaurant is here with the arrival of three different beers on tap at its location on Prospect Avenue, according to the Milwaukee Business Journal. They will be adding beer on a case-by-case basis for its Milwaukee cafes as it expands to Madison.

The three beers coming to Colectivo on Prospect are The Curtis, as Scottish-style session ale; the Cortado Imperial Stout and the One Turn Pale Ale; all three of which come from Shebyogan’s 3 Sheeps Brewing. Beer is also available at the Collectivo locations at 223 E. St. Paul Ave., 6745 W. Wells St. in Wauwatosa, and its Madison locations at 25 S. Pinckney St. and 2530 Monroe St.

In other news, Scott Schwebel, Vice President of Brand, Marketing and Retail at Colectivo, told the Milwaukee Business Journal that rumors of Colectivo joining the Corners of Brookfield project, a $200 million effort to place shops, restaurants and luxury apartments in a 400,000 square foot area formerly occupied by a Menards store and the West Point strip mall, are just that, rumors.

This monkey has swung its last bar. According to OnMilwaukee, the Monkey Bar, located at 1619 S. 1st St., will be closing this Wednesday, Sept. 16th.

The bar opened 14 years ago at 1517 S. 2nd St. and moved to their current location seven years ago. The building owners recently sold the building. The bar celebrated a reunion on Saturday.

“It’s been an amazing 14 years, but I’m excited to move on to a new opportunity…” said owner Diane Dowland on the Facebook page for the reunion.

Have you been to the Monkey Bar? What are your fondest memories of being there? Let us know in the comment section below.