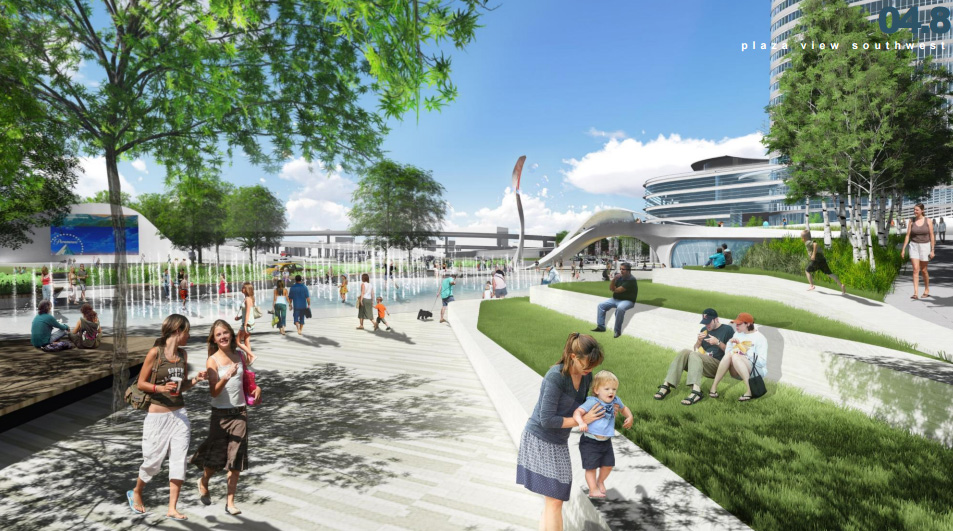 As a half billion dollars of new development was taking shape behind him, Mayor Tom Barrett announced Tuesday, October 27th, that Milwaukee-based Graef was the winner of a design competition to plan the proposed Lakefront Gateway Plaza.

The announcement was made outside the Discovery World Science + Technology Center, which would be one of the destinations served by the public space to be created from a patchwork of lakefront properties.

Barrett said the current configuration does not provide a visitor with a sense of the natural beauty of the 1.8 acre place just west of Discovery World. He said Milwaukee is seeing “momentum” with the development of the Northwestern Mutual Tower and Commons, and the 833 East building now underway, and the 44-story building, The Couture, soon to come.

“The timing is perfect,” the mayor said, just a day after it was announced that a federal grant of $14 million was on its way to help construct a streetcar line that will lead to the Gateway Plaza and will have a stop in the Couture. Recent reconstruction of the freeway, and the elimination of a ramp at the site will open up some 3-1/2 acres for development of a signature office tower, perhaps a home for Johnson Controls as some speculate.

N. Lincoln Memorial Drive will be extended to the Third Ward, and E. Clybourn St., which was once a grand thoroughfare will also connect to the plaza, on its route to greatness once again, Barrett said. The result will be a “beautiful destination,” and an “active space,” he said, calling the whole affair “a big achievement” for the city and its partners, including Discovery World, the Milwaukee Art Museum and Summerfest.

But don’t expect the bulldozers any time soon. “While a specific schedule for planning and constructing the Lakefront Gateway Plaza has yet to be determined, the hope is to move forward as promptly as possible,” according to a press release issued by the mayor’s office.

“Another important consideration is how the project will be financed. … Significant outside funding sources will be needed to complete the Lakefront Gateway Plaza,” the release cautioned. Furthermore, “the design of the plaza is certain to change significantly as the process continues. There will be additional opportunities for public comment and input.”

“This is not the final design,” the mayor reiterated in his remarks. “We will seek public input” as the design is developed. The process that led to the selection of Graef was more dependent on “the team, its approach and its ideas,” according to the mayor’s release.

The mayor and community leaders are mindful that raising tens of millions of dollars to develop a public space on the most valuable real estate in Wisconsin may not be a priority for those in the community who are concerned about other issues, like the condition of public amenities and problem of joblessness in the city’s impoverished areas.

This is where the Greater Milwaukee Committee and NEWaukee come in. Julia Taylor, the President of the GMC, said the “project will impact our community for generations to come and gives us the opportunity to help create meaningful connections with our citizens, out neighborhoods and our visitors.”

In March, the civic organization convened a Downtown Task Force to “provide thoughtful leadership and civic guidance early in the evolution of proposed civic and infrastructure projects” like this one.

“The Downtown Task Force will be playing a key leadership role in the Lakefront Gateway Plaza project,” she said. Barrett said Taylor was doing a “fabulous job engaging the business community” in the redevelopment of downtown.

Downtown Task Force co-chair Gregory M. Wesley, an equity partner in the law firm of Gonzalez Saggio Harlan, addressed the neighborhood concerns in his remarks. With Downtown anticipating “billions of dollars in development” over the coming years, he said, “one of the goals of the Downtown Task Force is to develop a framework that ensures that projects like the Lakefront Gateway Plaza align with existing city and community planning documents and fit into an overall vision for the Downtown and adjacent neighborhoods.

“Additionally, the Task Force is committed to creating pathways for meaningful community engagement — particularly in our neighborhoods — as these projects move forward. While the project we’re talking about today will be located along our lakefront, we must take steps to ensure that everyone in the city and the neighborhoods surrounding our Downtown feels a sense of ownership, accessibility, and pride in what is developed through this project and others like it.”

County Executive Chris Abele said the question was “how can we improve on the experience” of the site. He said that similar venues in Vancouver or Sydney “take your breath away.”

NEWaukee, which has partnered with the GMC on other projects like the Night Market and the Artery, will handle some of the “creative placemaking” efforts. The city has won national funding for these efforts. Common Council President Michael Murphy, in his remarks, said that “creative placemaking involves all in the community” in the decision making process that lies ahead.

Patrick J. Kressin, a Principal with Graef, said the principal elements of his plan include a bridge, an amphitheater and a “nest” with excellent views of the city. There is to be a 4-season water feature, and a tower that would change color, emit ice or snow and even burp out bubbles.

The tower feature was panned in an August Urban Milwaukee review by architecture critic Tom Bamberger, who wrote of it:

“The sculpture changes color according to the weather. … It also swishes. What a cheap thrill. This phallic climax, which is in every view of plan, reminds me of hair you can still see in 1970’s movies and TV. shows. Primped and painfully stupid.”

Perhaps the tower will be one of the items discussed in the open sessions planned by the mayor to refine the park’s design. “This work is not being done in isolation,” he promised. It is composed of many pieces that will take some time to put together. But once complete, “it will look like it happened overnight,” he said.

The Graef team is Milwaukee-based and includes PFS Studio of Vancouver, British Columbia, Canada. Judging from its other projects, PFS is the firm that came up with the color-changing tower. Rinka / Chung architects of Milwaukee, designer of the Couture, will also partner with Graef in the project, as will NEWaukee, as mentioned. Dan Euser WaterArchitecture of Richmond Hill, Ontario (another Canadian), will perform work within its field of expertise.

“The jury that reviewed the four final teams for the Lakefront Gateway Plaza was made up of various stakeholders and design professionals. The members are:

–From the city of Milwaukee press release. 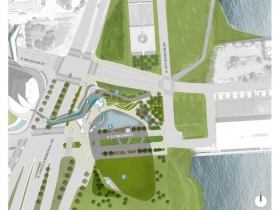 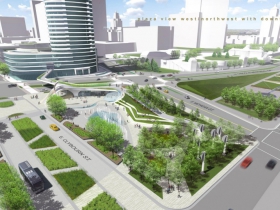 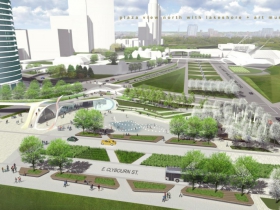 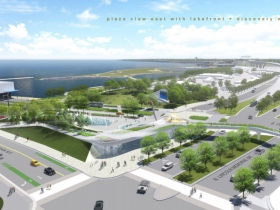 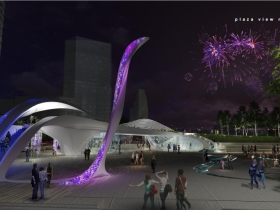 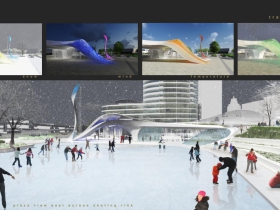