James Corner is one of four finalists to create $30 million lakefront bridge. It’s a great design.

The city has launched a $25-$35 million national design competition to create a landmark lakefront bridge. There are four finalists for the competition, and given the need to attract donations for the plan, the winner is likely to be the biggest name, James Corner Field Operations, who also did the much-celebrated High Line in New York. His star-power should make it easier to raise private sector dollars from the community, and Mayor Tom Barrett has never tried to raise that kind of money for a major design project.

If Corner does win, that would be great, because his team, which includes Milwaukee’s La Dallman Architects, is clearly the best of the lot. Theirs is the only proposal that rises to the occasion. 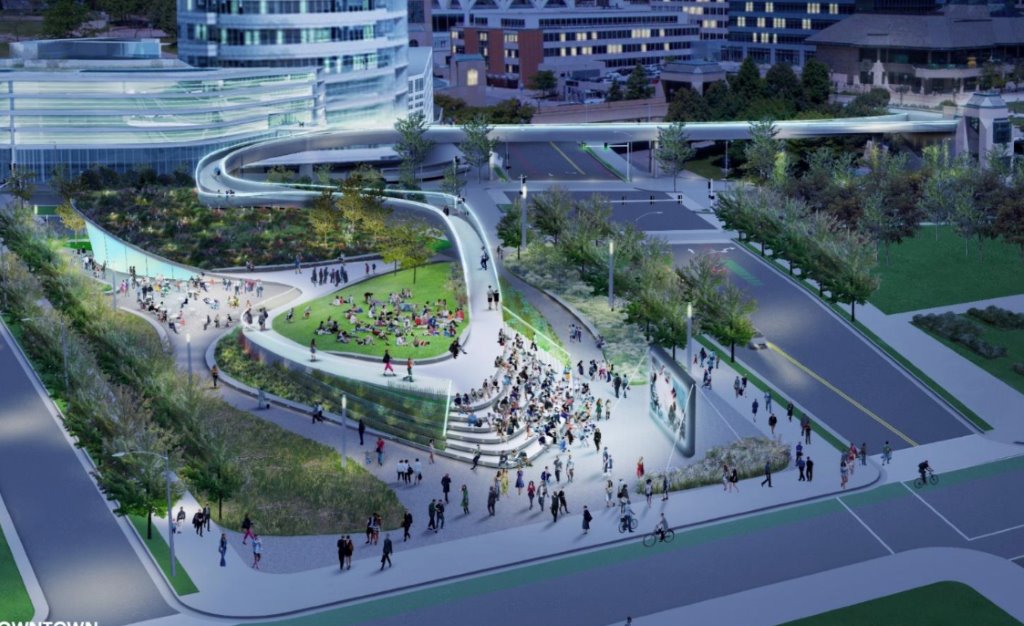 Their bridge flows to the lakefront across two nicely proportioned bluffs that are elegantly shaped and landscaped, then swings around inside itself in a figure eight to a ground-level plaza. On the northeast corner seven broad arcing steps go down to an circular fountain that is directly on axis with the Kiley, the adjoining rectilinear garden in front of the Art Museum.

Incredibly, this is the only proposal that found a way connect their new piece of the puzzle with the most significant landscape architecture in the state, by international star Dan Kiley. It makes sense that a landscape architect of Corner’s stature would not miss an opportunity to nod to Kiley. All things being equal, failing to integrate the Kiley would be a deal-breaker for me. It’s too elementary a mistake to forgive.

A sleek glassy pavilion tucked under the bluff at the corner of Lincoln Memorial Drive and Clybourn extends the urban fabric into the new space. This softens the relationship between the high rise buildings across the street and lake. It is also a genuine part of the landscape.

I really like how the volumes are effortlessly woven together. It’s robust yet calm. A natural solution and the only one of final four plans that has a convincing vertical dimension. 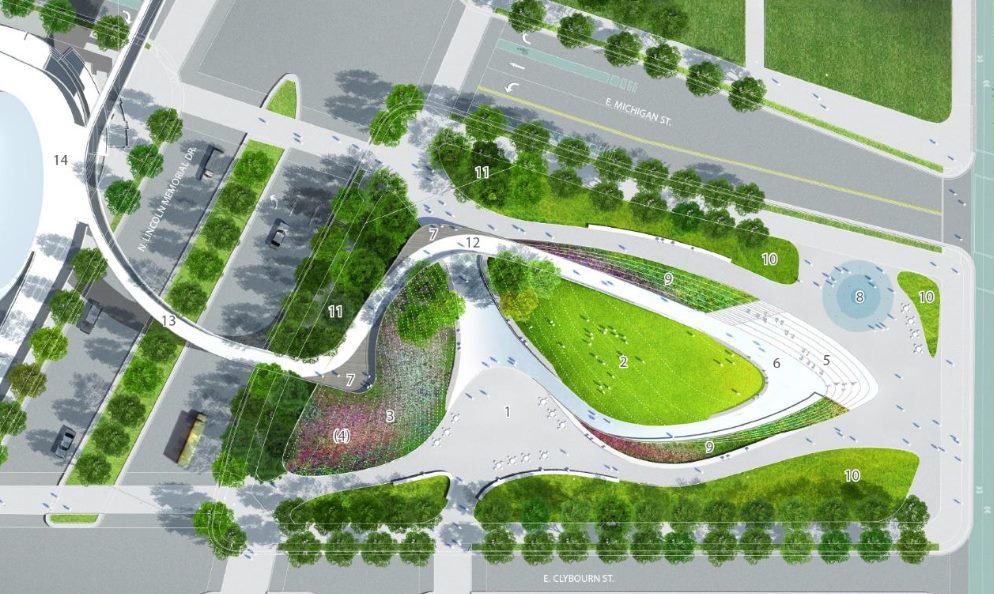 Marilu Knode, former director of INOVA in Milwaukee and present Executive Director of the Laumeier Sculpture Park in Saint Louis, is also on team. She is a great asset, someone to limit the damage so-called public art usually inflicts on public spaces in Milwaukee.

Along the periphery there are few thing that need to be reconsidered when this design moves forward. Corner’s team proposes a row of trees along Lincoln Memorial Drive that conflicts with the Kiley. An ersatz row of trees, which looks like an afterthought, obscures the beautiful rationality of Kiley’s landscape. I don’t think this is the final solution, or maybe I don’t understand the rendering.

And they have taken the array of Winds Leaves, by Ned Kahn, in front of the Discovery World and lined them up like lamp posts down the middle of the boulevard extension of Clybourn. The considerable charm of the work is being among the seven-foot stainless steel structures that turn into the wind like windmills. Their circular array multiplies the effect, creating an immersive experience that will be lost when lined up in the middle of a street. 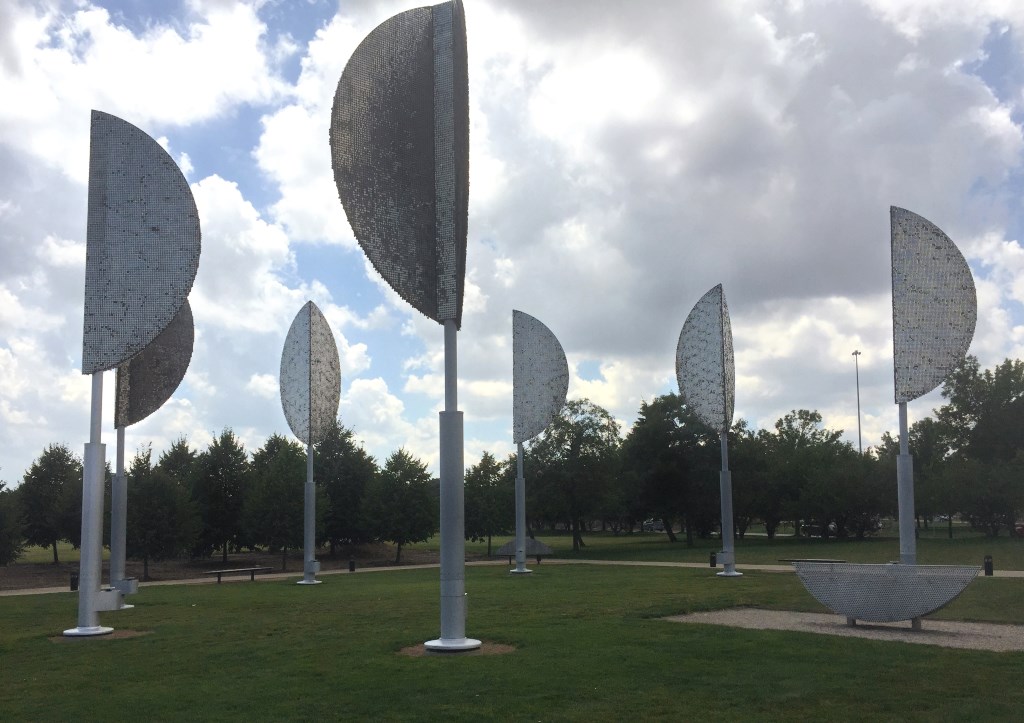 The Kahn may have to be moved to a new site. It doesn’t have to be in front of the Discovery World building.

It will also be poetic justice if this project gets built. You may remember La Dallman created our last significant public space, the Media Garden under the Marsupial Bridge, that was later bulldozed by the Barrett administration to make way for a few swings.

As for three other design entrants, my first thought was this might be a real competition. But the more I look at these proposals, the worse they get, some tragically so. None of the other three proposals are even in the same league. I will be shocked if the the Corner team does not win on their merits. Apart from the fund raising advantages of their resume, their design is so superior to the others I suspect they’ve already been chosen for this project.

Looking at the AECOM team’s proposal, it takes a while to see beyond the graphics of thin people of every gender, race, and class joyfully communing with each other and nature. Kids are either eating ice-cream cones or cavorting in fountains, all bathed in the wonderful special effects of light and shadows. Then an imaging program magically turns a day into night or a plaza into a winter wonderland. Which makes me wonder if there is a way to have architects make their renderings less “happy” so they don’t look like advertisements for cancer clinics.

The AECOM Team proposes an endless and senseless spiral bridge that swallows up its destination. The structure sprawls and is surrounded by an equally endless concrete plaza. They were so taken with the spectacle that their bridge actually takes you up before it goes down to the lake front.

AECOM lost sight of larger context. You don’t want to make something that competes with the visual drama of the place. This project is about a journey.

AECOM shouldn’t be a finalist for this kind of a project, which makes me wonder about what the “secret” panel was thinking, or rather if they were thinking about this site. The bridge is a monstrous piece of architectural kitsch that’s fine for an amusement park. It could be a skate park or water slide someplace else that doesn’t matter. Everything around it is a dead zone. AECOM does stadiums and sports arenas, introverted and self- absorbed buildings that don’t fit anywhere except inside themselves.

Another entrant, GRAEF, teamed up with Rinka Chung Architecture, the local architects of The Couture. Their plan is topped off by a sculpture that slithers out of a bridge that is really a pavilion. Or, a pavilion that is really a bridge. This adolescent structure has yet to make up its mind what to be when it grows up.

The sculpture changes color according to the weather. That has to be some reference to the past glories of the flame on top of the old Gas Building. It also swishes. What a cheap thrill. This phallic climax, which is in every view of plan, reminds me of hair you can still see in 1970’s movies and TV. shows. Primped and painfully stupid. 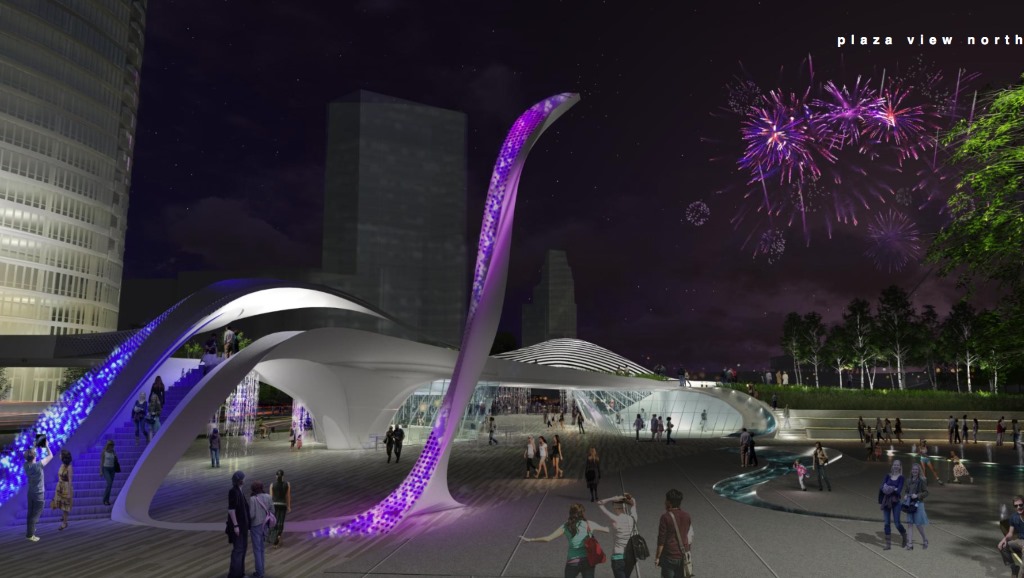 Here you see it again, genuflecting to the Calatrava.

It’s a relief when the thing finally stops following you around. Without it the scene is more spacious and the line of the Hoan bridge is much stronger.

Yes, the plan has fountains and a skating rink. All the goodies are thrown together like candy in a Halloween basket. The plan has no shape. It doesn’t create a volume like Corner’s proposal, or anything that adds up to something we would call a “place”.

This building on the corner looks like a place to drop off your rental car at an airport.  And the blank green space to the left? There can be no other explanation or justification for this drive-by corporate landscape on the lakefront. Follow the money if the architect of the Couture ends up with this commission. 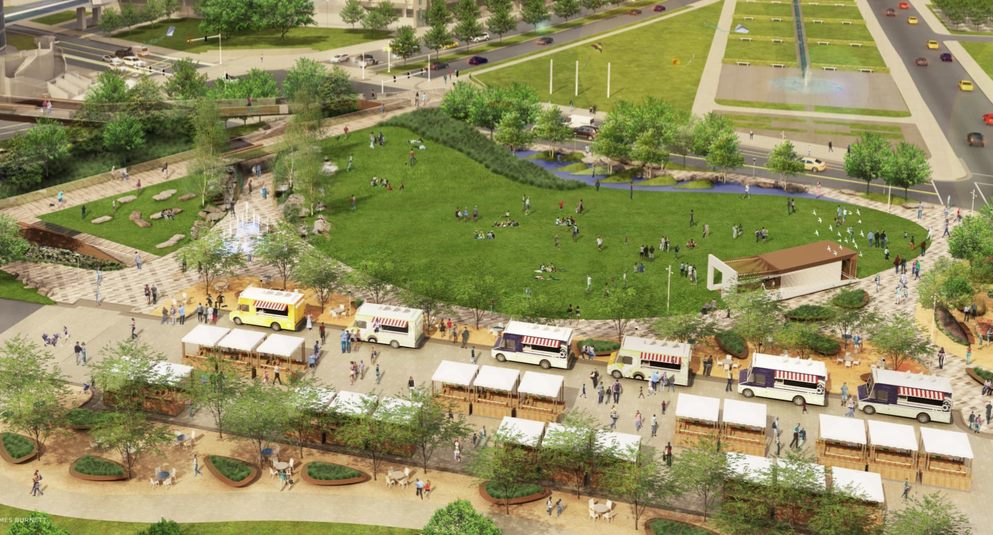 Last but not least, OJB or Office of James Burnett could have been a contender. It’s the only proposal other than Corner’s with an idea worth stealing.  All roads don’t have to lead to Michael Cudahy’s Discovery World. Why not make the near useless extension of Clybourn Avenue, which is only 130 feet from Michigan Avenue, into something that can be used as a food truck destination in the summer?

OJB, which teams up with local firm Johnsen Schmaling Architects, is also the only team that conceived of the project as a space defining a bridge rather than the other way around. They minimize the impact of the bridge by folding it back upon itself along the western edge. This creates a buffer from Lincoln Memorial Drive and leaves room for a sloping lawn shaped like a giant putting green. I love putting greens.

Too bad one of the other finalists didn’t take this approach. I wonder if this was something the panel overlooked. It makes a lot of sense as a starting point for a good discussion leading up to a final design. 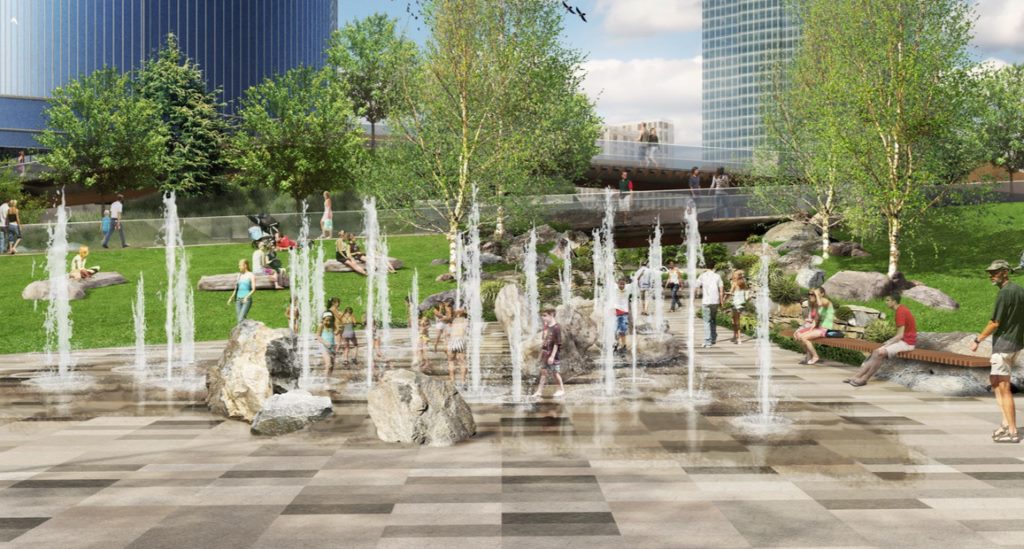 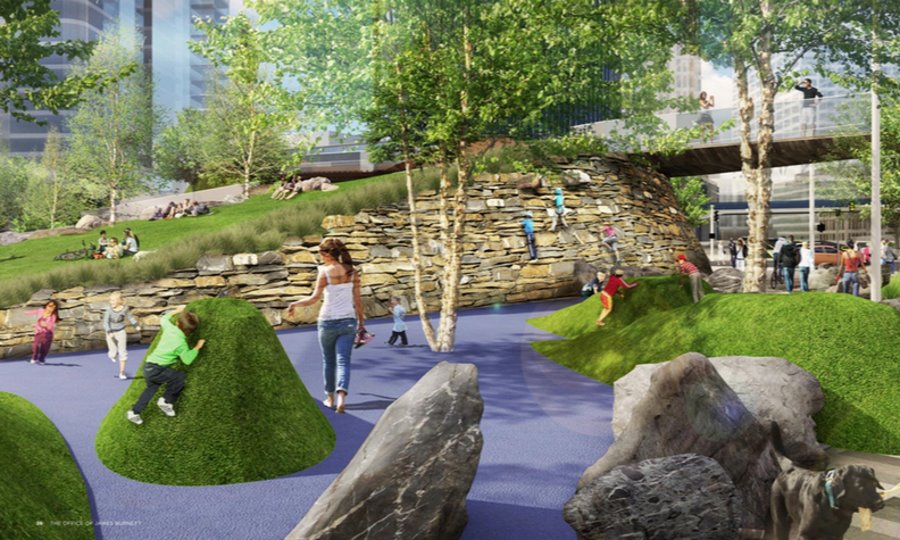 It doesn’t seem like the OJB team worked very well together. I find it inconceivable that the architect of this project, who makes exquisite Modern homes, would litter the landscape with slabs of rock that look like a set from a Flintstones movie.

Then OJB added a rustic playground. That blue stuff is not water by the way. Considering the context, this may be the last place in Wisconsin that should be “countrified.”  We don’t need fake child-proof water on the shore of a Great Lake.

The winner of the competition will be officially announced some time this fall, but seems obvious from a design perspective. The real drama here is the money question. Are the “stakeholders” — neighboring institutions like The Couture, Discovery World and Northwestern Mutual — and the mayor going to raise enough money to make it happen? And will that change who wins? The answer could have a huge impact on the city and on Barrett’s legacy as a mayor.

23 thoughts on “In Public: Will Milwaukee Choose High Line’s Designer?”