The Best City View in Town?

The view. Photo by Joey Grihalva.

Between PrideFest, Bay View Jazz Fest and a raucous house party at a barbershop hosted by rising young rapper IshDARR on the weekend before last, the Milwaukee entertainment scene had me feeling like I was in New York. Summer is when Beer City really shines. The festivals, the music, the patios, the lake, the hidden beaches, the ever-growing selection of shandy beers and crisp cocktails, it’s all good. In the cold months Blu atop the Pfister Hotel is the best bar for a swanky vibe with a view. Come summertime the place to be is The Yard behind the Iron Horse Hotel (500 W Florida Street).

While the Pfister is a symbol of old Milwaukee luxury, the Iron Horse may represent the future of nightlife swank in town. Housed in a century-old warehouse, the Iron Horse was remodeled less than a decade ago into a boutique hotel. The decor is a unique blend of modern comfort, vintage brass, wood and transportation-themed antiques. The hotel’s name may derive from the 19th century nickname for a train, and there are tracks alongside the hotel, but many of their transportation relics are of the motorized two-wheeled variety. This surely has something to do with the fact that the Harley-Davidson Museum is just across the 6th Street bridge, so the hotel’s name really evokes another kind of iron horse.

I first stepped into the Iron Horse this past New Year’s Eve for a special party hosted by the multi-talented performer Klassik. Backed by the musicians of New Age Narcissism (who headlined Locust Street Festival on Sunday and Summer Solstice next Saturday) the band boogied on a makeshift stage in the hotel lobby. It was one of the best New Year’s Eve celebrations in recent memory. I returned to the Iron Horse a week ago Sunday to see Klassik perform once again, this time for the first installment in their Sunday Sounds summer series in The Yard. It was the soft debut of a new supergroup called Foreign Goods, which includes Klassik, Sam Gehrke (bassist in Soul Low), Q The Sun (New Age Narcissism) and Jay Anderson, saxophonist extraordinaire. (Seriously, Jay gigs all over town. On Sunday he performed at three different Locust Street Festival shows and one at Garlic Fest.)

The Yard’s happy hour is not active on the weekend, but I fell in love with the space immediately and had no problem returning during the week. First off, on The Yard itself: In between the bar and the black rocks in the back sit a number of comfortable sprawling couches, with triangular fabric hanging overhead that provides shade. Beyond the trees and past the train tracks is a spectacular view of the Milwaukee skyline. Their happy hour invites you to literally drink in the city, with $3 Milwaukee beers, $5 local liquor mixers, plus $5 Wisconsin beers. This deal, dubbed “Local Motives,” runs Monday through Friday from 4pm to 7pm. While many bars in town carry local booze by Great Lakes Distillery, which is a stone’s throw from the Iron Horse, they also have Twisted Path (Bay View) and Death’s Door (Middleton, in Dane County).

During my evening under the sun at The Yard I sipped on a delicious vodka-tonic made with Rehorst Citrus Honey vodka. In addition to their local drink deals, The Yard’s happy hour includes a Wisconsin favorite, “pigs in a blanket,” but with a meaty twist. Instead of a hot dog in a croissant, The Yard’s “pigs” are house-made sausage wrapped in Wisconsin bacon, 3 for $2. I washed my order down with a pint of Sprecher’s Abbey Trippel, which is regularly $6 on tap. Alongside the Trippel are Lakefront IPA, Riverwest Stein, MKE Brewing Little Bitta IPA, Spotted Cow, Founders Porter and Summit Pilsner. They also carry 20 American bottles ($4-$9), 7 imports ($5-$8), plus short cans of Schlitz and PBR that are always $3. The wine selection includes 8 whites ($8-$14, $36-$56), 8 reds ($8-$15, $32-$60) and 3 sparkling ($9-$13, $38-$52). The liquor selection isn’t expansive but they have all the greatest hits, plus a focus on local craft as mentioned. On Fridays their “Local Motives” series extends beyond drink and sausage specials to a music series. (Friday’s performer will be Kiings.)

Even without the sweet sounds of local music, it was hard to leave my cozy couch that night, what with the warm air, cool breeze, local drinks, food and that great view of the city. I was tempted to get a room in the hotel. Then a train whistle blew below The Yard and I was shaken from my mental getaway and remembered I had to get up for work the next morning.

For more information on the Sunday Sounds, Local Motives Music Series, and other events at the Iron Horse Hotel, visit their website http://www.theironhorsehotel.com/. 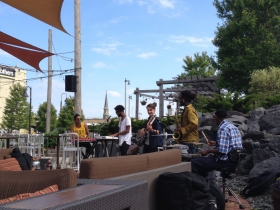 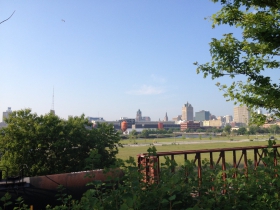 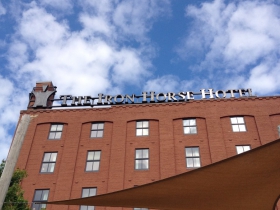 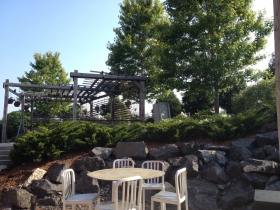 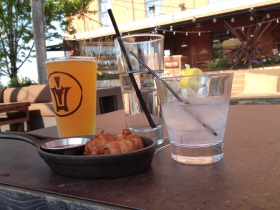 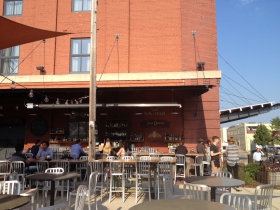