The annual PrideFest was a hit again last weekend. The fest celebrated the history and contributions of the LGBT community while also providing a place for networking and entertainment. Friday was my first time at the festival, and I can say without a doubt that it was the most fun I’ve had at the Henry Maier Festival Park in a long time.

The highlight for me was the “Lady Gia Drag Show” at the Johnson Controls World Sound Stage (which was renamed the Dance Pavilion for the fest). Performers strutted down the catwalk as they lip synced to popular songs. Performers ranged from a Nicki Minaj look-alike to a poodle skirt-sporting woman who lip synced to Meghan Trainor. Attendees were highly encouraged to give tips.

After the drag show, Trixie Mattel and Trannika Rex made an appearance to kick off the dance party. There was much banter between the two, often scatological, but always in good fun.

The dance party, led by DJ Shawna and then by the DJ’s of Scarlet featuring DJ Luna & DJ Scotty T, lit up the Dance Pavilion for the remainder of the evening. Everyone jumped to the beats of House of Pain and more. Many drag show performers danced alongside the crowd in the catwalk, including a group of furries who danced along to Maroon 5’s “Animals”.

Opening ceremonies were then conducted at the Miller Lite Mainstage, with Alex Newell of “Glee” fame singing the national anthem. Many area politicians and sponsors around the Milwaukee area were present to give PrideFest their blessings, including the President of Pridefest Scott Gunkel and state Sen. Chris Larson who encouraged attendees to vote often and to embrace equality. “Let’s get to work and before that let’s have fun,” Larson said. Awards were also given away at the ceremony, including a PrideFest medal of community service to Washington Heights Rainbow Association, a Pridefest medal of presentation of community service to Gender Crew Milwaukee, and the winner of the PrideFest t-shirt design contest.

Many other music, dance, comedy, fashion and educational performances were held at PrideFest throughout the weekend. Headliners included Ani DiFranco, En Vogue, and Ty Herndon. PrideFest also encouraged attendees to “Look beyond the headliners. Explore your world,” on their website, and there were certainly many other performers to enjoy. During my visit, I saw Tom Goss, a rising power-pop star, and his acoustic/synthesizer rendition of Mark Ronson and Bruno Mars’s “Uptown Funk.” Annabel Lee and Lauryl Sulfate and her Ladies of Leisure tore it up at the WOM!NZ Spot Café.  I also got to see Newell performing at the Miller Lite Mainstage, where she showed off her impressive set of pipes, belting popular songs while cracking jokes along the way.

There were many food options for festival goers. Tents for different sponsorships filled the area around gate 6, most of which belonged to wedding organizations and bakeries. I sampled a lovely vanilla cupcake with blueberry/balsamic buttercream from Eat Cake. Bigger eateries around the fest were as diverse as the people there, including Screaming Tuna and Immys African Cuisine. The fried cookie dough I tried was delicious.

All in all, PrideFest was simply fantastic, and I can’t wait for next year. Check out the photo gallery below, which captures all the fun. 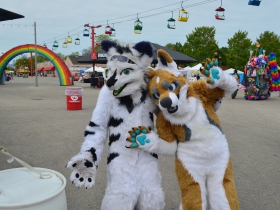 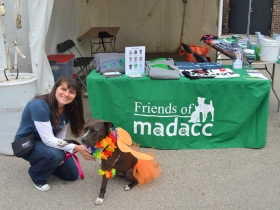 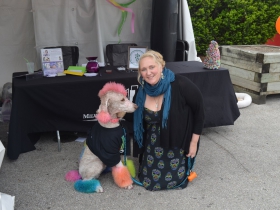 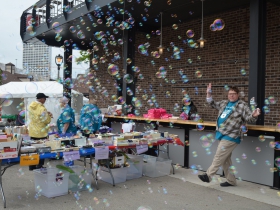 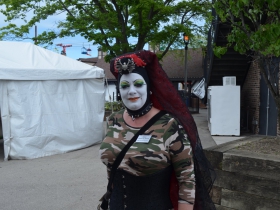 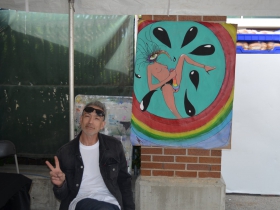