Push For $15 Minimum Wage A Mistake? 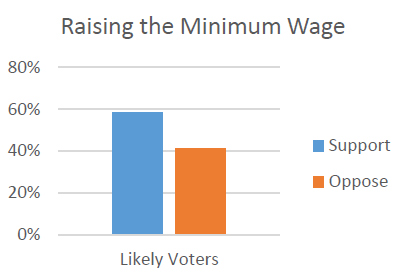 For years, economists have pointed to the popularity of raising the minimum wage as evidence of public ignorance of basic economics. That popularity was reflected in the Marquette Law School from last fall, which found 57 percent supported a hike and 39 percent opposed it. Undercutting this support was classic economic theory, which warned that an increase in the minimum wage would raise the cost of labor, leading companies to cut jobs and thereby increasing unemployment among the intended beneficiaries. Raising the minimum wage was regarded as a well-meaning proposal that did more harm than good.

In two previous articles (here and here), I described how this consensus has shifted. The shift resulted from a series of studies comparing employment in neighboring jurisdictions with different minimum wages, which showed a very small impact on jobs. 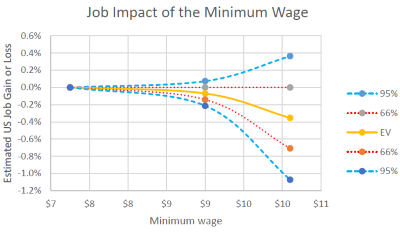 Job Impact of the Minimum Wage

The Congressional Budget Office has published estimates of the employment effect of an increase of the minimum wage from the current rate of $7.25 per hour to $9.00 and to $10.10. The latter would take the wage back to nearly its peak in 1968, in real dollars. The CBO estimated the $10.10 minimum would reduce would reduce total employment by about 500,000 workers, or 0.35 percent, as shown by the expected value (EV) line of the chart to the right. The $9 wage would reduce employment by about 100,000 workers, or less than 0.1 percent.

The CBO found there was a two-thirds chance that the actual effect would be within its range of estimates, a confidence level that is quite rare in statistics. The upper and lower bounds of this range (between zero impact and a minus 0.6 percent impact on jobs) are shown with red dotted lines on the graph. This is consistent with the growing consensus that the employment effect, whatever its true value, is negligible at both the $9 and the $10.10 levels.

Compared to the possible job loss, the benefits were major. The CBO estimated that 16.5 million people would have higher earnings if the $10.10 option was implemented. The estimated increased earnings would total $31 billion. Thus the number benefitting from higher earnings would be far more than those losing jobs under even the most pessimistic scenario. And that gain in earnings would give workers more money to spend on fast food and other retail purchases, helping drive revenue and jobs in the retail industry.

In the past, many economists viewed the earned income tax credit as a better alternative to the minimum wage as a way to help low-income workers. Increasingly popular is the view that the two are complementary—that an increase in the minimum wage is needed to assure that the EITC benefit goes to the worker rather than the employer. This is because if the EITC allows an employer to attract workers at a pay level lower than it would have to pay without the EITC, a portion of the tax credit is going to the employer’s bottom line, rather than to the employee. 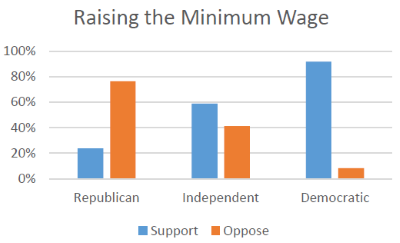 Despite the popularity of raising the minimum wage among the population as a whole, the issue has become very partisan. The same Marquette poll results, broken down by party affiliation, found 92 percent of Democrats and 58 percent of independents supported a minimum wage hike, but just 24 percent of Republicans did. In Wisconsin, where Republicans control all the levers of government, this polarization makes it difficult to pass an increase.

Raising the minimum wage continues to be opposed by many business groups. As Adam Smith noted over two hundred years ago:

Just as the support for a higher minimum wage has been strengthening, however, some labor groups have started shifting it to shakier ground, holding demonstrations in Milwaukee, Madison, and elsewhere advocating for a $15 minimum wage, double the present level. They have been joined by former Maryland governor and current presidential candidate Martin O’Malley, apparently to position himself as Hillary Clinton’s more liberal rival.

The trouble with this proposal is that it puts the minimum wage at a level far above any that has been studied. With no experience, there is no good way to predict its effect on employment. An article on the Washington Post’s Wonkblog gets negative reaction to a $15 minimum wage from most of the economists who have studied the issue, including those who found that raising it had a positive effect on employment at the $9 or $10 level.

Soon we may learn much more about the impact of a $15 minimum wage. Seattle’s law requiring this took effect starting April 1 of this year. To Seattle’s credit, it hired a team of researchers to study the effects. Its implementation has been accompanied by claims of the mass closing of restaurants. However, the sources of these claims cannot be considered unbiased, particularly if one considers their other headlines, such as “Conservatives Face Armed Government ‘Witch Hunts’ In Wisconsin,” referring to the John Doe investigation.

While genuine researchers are reluctant to speculate on the effect of a $15 minimum wage, ideological groups like Wisconsin’s MacIver Institute show no such reluctance. It recently sent out a tweet that said, “Protesters gather at Red Arrow Park in Mke calling for a $15 #minimumwage that would cost 91k jobs in WI.” The 91 thousand job loss interested me. How was it calculated? The tweet offered no link to a source, so I looked on the MacIver web page.

In a report titled the dire consequences of the fight for 15: an analysis of a $15 minimum wage in Wisconsin, MacIver claims that 91,521 workers would lose their jobs in Wisconsin if the minimum wage rate were raised to $15 per hour. This is 3.1 percent of current Wisconsin employment. The report offers no background on how this figure was calculated other than the following paragraph:

The report is based on data collected by economists David Macpherson of Trinity University (TX) and William Even of Miami University (OH). They used sampling methods similar to those used by the non-partisan Congressional Budget Office (CBO) to assess the employment effects of a $15 minimum wage across many demographics in the Badger State.

MacIver offers no link to the Macpherson-Even study. Neither MacIver nor Macpherson responded to an inquiry from me. How they arrived at this figure is a mystery. The apparent precision of the 91,521 figure is grounds for suspicion; most legitimate studies offer a range of estimates. (By a strange coincidence the report notes that a federal report estimated that 91,000 Wisconsin workers were paid at or below the minimum wage in 2013.) At least until it releases the details of that study, the MacIver claim must be regarded as unsubstantiated.

To push for a $15 wage is to shift the debate from increasingly solid ground to ground that is treacherous, where there is no good research so speculation can run wild. Why do it, especially since any increase in the minimum wage will require some Republican support? This appears to be another example of the unions’ propensity for snatching defeat from the jaws of victory.

Perhaps the aim is to push Democratic candidates towards a more aggressive increase in the minimum wage in order to win the Democratic primary. But as Republican Mitt Romney discovered when it came to immigration reform positions taken to win over a party’s base, that can come back to haunt a candidate in the general election. Unions may find that moving the Democrats to the left helps the electoral prospects of a Republican party that has become increasingly hostile to union causes.