The Real Impact of the Minimum Wage

A new study by the non­partisan Congressional Budget Office looks at the costs and benefits.

The recent Congressional Budget Office report on the minimum wage has been seized upon by some opponents of raising the minimum wage. It is important therefore to look at what the report actually says. First, it’s worth noting the CBO is careful not to take sides on issues since both parties depend on its estimates. Thus it tends to adopt conservative assumptions about what is likely to happen.

The CBO looked at two options. The first would raise the federal minimum wage from $7.25 to $10.10 an hour in three steps. This would give the minimum wage almost the buying power it had in 1968. The second option would raise it to $9.00 in two steps. 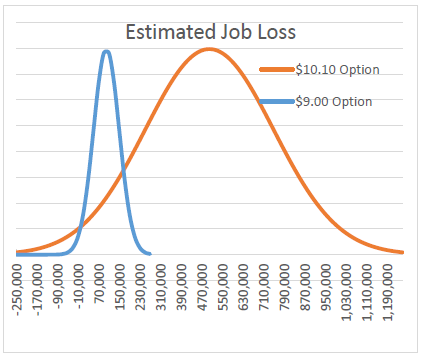 The center point of the CBO estimate for the first option is a loss of 500,000 jobs with a range of estimates running from a small gain to a loss of about a million jobs, as sketched in the first graph.
For the second option, raising the minimum wage to $9, the midpoint of estimates was a loss of 100,000 jobs.

While the 500,000 number may seem large, it’s less than 1 percent of US unemployment. It represents about two months of average job gains in 2014.

The potential job loss must also be balanced by the resulting reduction in poverty. The CBO estimated the $10.10 minimum wage would reduce the number in poverty by 900,000. With the $9 wage the poverty reduction was smaller but still substantial: 300,000 people crossing the poverty line.

16.5 million workers making less than $10.10 per hour would get a wage increase under the first option. Under the second option, that number drops to 7.6 million. 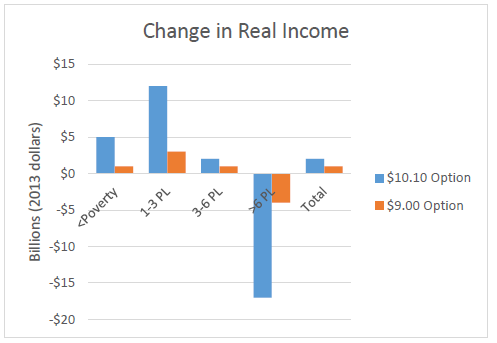 Three of the four groups would have an increase in total net income. Only the groups with the highest incomes would have a net decrease, reflecting a rise in prices of some goods and services people purchase.

This redistribution from top to bottom is reflected in the CBO’s calculation that when the income changes across the spectrum are added together there is a net gain to all families of $2 billion. This reflects the increased economic activity that results when low-income people see their income increase.

The CBO estimates are well within empirical studies of the effect of the minimum wage on employment. As I discussed in a previous article, some studies found a decrease and some an increase in employment but all the effects were small. A brief look at economic theory helps explain why the change could go either way. The next graph shows the classic chart of supply and demand for businesses that both hire minimum wage workers and sell to them. Fast food restaurants like McDonalds and low-price retailers like Walmart are examples. 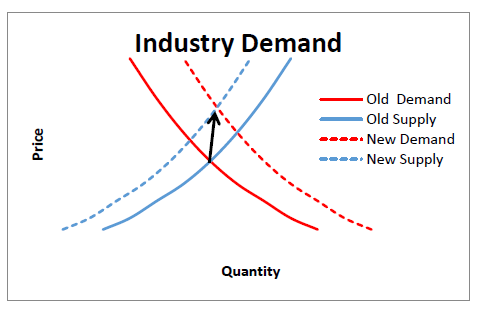 A rise in the minimum wage pushes the supply curve to the left as the business faces higher labor costs. At the same time, the demand curve moves right because customers have more income. The new equilibrium will settle at a higher price than the old, but the quantity sold—and therefore the need for employees—could shift in either direction, depending on the specifics of the situation.

How much are prices likely to rise if the minimum wage is increased? A recent op ed in the Journal Sentinel raised the specter of a $10 Big Mac. Is that realistic? Let’s say the current price of a Big Mac is about $4. An estimate from a consulting firm serving clients interested in buying a franchise estimates that the cost of crew labor (including the payroll tax) represents about 22 percent of revenue for the typical McDonalds franchisee. Assuming that all crew members would get a wage increase and applying these factors suggests the $4 Big Mac might be priced at $4.34.

The CBO report debunks several widespread myths about low-wage workers—those making less than $10.50 an hour. One is that they are mostly teen-agers earning gas and date money; CBO found that 12 percent were under 20. Another is that they are mostly high school students or dropouts; 21 percent had not graduated from high school. It also found that a majority worked full-time.

In last fall’s elections, voters in Alaska, Arkansas, Nebraska and South Dakota passed proposals to raise the minimum wage, bringing to 29 the number of states with minimum wages higher than the federal level. As a result, Wisconsin is now in the minority of states whose minimum wage is effectively the federal wage.

When the University of Chicago asked its panel of academic economists whether or not raising the minimum wage would “make it noticeably harder for low-skilled workers to find employment,” the response was evenly split, but no one expressed strong confidence in their answer. But when asked whether doing so was a desirable policy only 12 percent said no. Taking all the CBO findings together helps explain why there is a growing consensus about the desirability of raising the minimum wage.

6 thoughts on “Data Wonk: The Real Impact of the Minimum Wage”