Have Walker’s tax changes increased or decreased inequality in the state?

Growing income inequality in the US is raising increased concern. Is the middle class an endangered species? Will children born poor find it increasingly difficult to work their way into the middle class?

In the next few years Gov. Scott Walker and the Republican-led legislature will be making major decisions about its tax structure and whether the changes increase or decrease income inequality in Wisconsin.

Generally speaking, regressive taxes make income inequality greater, progressive taxes reduce it, and neutral taxes have no effect. The organization that has done the most extensive analysis of how state taxes redistribute income upward or downward is the Institute on Taxation and Economic Policy (ITEP). 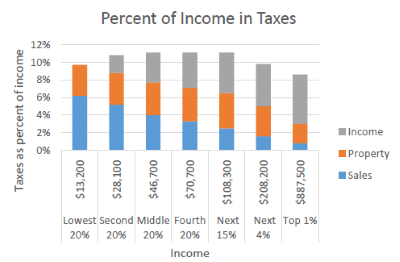 Percent of Income in Taxes

Like most states, Wisconsin’s state and local governments are mainly funded by three taxes: income, property, and sales. The chart below shows ITEP’s analysis of the percentage of their income Wisconsin families of various income levels pay in taxes. It divides the lower 80 percent of taxpayers into four equal-sized groups based on income. The top fifth is further subdivided into three groups, the lowest 15 percent, the next 4 percent and the top 1 percent.

Wisconsin’s income tax is progressive. It remains so even after a decrease in the earned income tax credit early in the Walker administration.

Wisconsin’s property tax is fairly neutral. At the highest level it becomes somewhat regressive because very wealthy people spend a lower percentage of income on housing.

Wisconsin’s sales tax is strongly regressive, despite exempting food and most services. Most of the tax paid by lower income people is for the sales tax, while it’s a tiny portion of taxes paid by the wealthy. 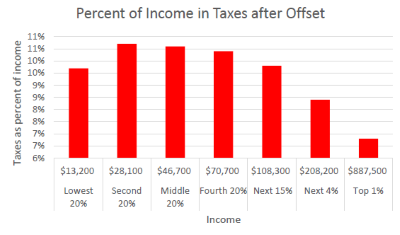 Percent of Income in Taxes after Offset

Taxpayers who itemize are able to deduct their property and income taxes from their federal income taxes. The value of this offset is greater for higher income people because their property and income taxes are likely to be higher and because they’re more likely to itemize deductions. The next chart shows ITEP’s estimate of the effective taxes people pay at different income levels. Wisconsin’s tax system is dome-shaped: it is slightly progressive at low incomes, essentially flat through the middle 60 percent of taxpayers, and regressive at the highest incomes.

During the Walker term, there were several changes in the state income tax. Walker seems to have been sensitive to the charge his changes were favoring the wealthy. Rates were reduced somewhat more at the lower brackets than at higher ones. The chart below shows the before and after taxes that people at various income levels would pay. 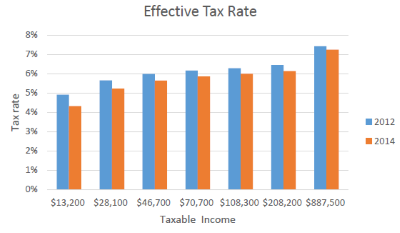 As can be seen, effective rates dropped less at higher incomes than at lower incomes. In isolation, this change would have made the Wisconsin income tax slightly more progressive.

However, the other effect of the change is that the income tax collects less money. So how did the state make up for this loss? I will let the pro-Walker MacIver Institute, explain how:

An in-depth analysis by the MacIver Institute of local and state savings brought on by Wisconsin 2011 Act 10 has found that tax payers have saved $2.7 billion since the law was enacted…..  Savings continued to increase over the last 12 months and now total just under $3 billion… A majority of state and local savings were due to state employees contributing half of their pension contributions and a minimum of 12.6 percent of their health insurance premiums. These minor changes for state employees have helped Wisconsin not only balance its budget, but cut income taxes by nearly $650 million and property taxes by $100 million over the next two years.

In other words the reduction in income tax rates was largely funded by cuts to compensation of state and local public employees. Thus the funding source for the tax cuts was a group of middle-income people. Quoting the state budget office, the Journal Sentinel said Act 10 reduced the take-home pay of the average state worker making $50,000 a year by $4,228. By comparison the Walker income tax cuts would save this person $172. 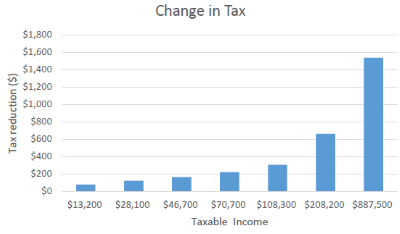 Like most reductions in income tax rates the benefits of this change were heavily skewed towards wealthier taxpayers. The top 1 percent of taxpayers received over 7 percent of the benefit, while the top 20 percent received about 43 percent.

Thus, the combination of Act 10 and the income tax changes resulted in a substantial upward redistribution of income from a group of predominantly middle income people to very wealthy people, thereby increasing income inequality.

Walker and the legislature could have chosen a less top-heavy use for the Act 10 savings. One example is a tax credit that applies equally to everyone. Another would have used the savings to increase middle-income jobs, such as those for more teachers or police officers.

Gov. Walker has made it clear he will make proposals for changes in Wisconsin tax laws. During the campaign he committed to further reductions in the income and property taxes and to not support an increase in the sales tax. But in at least one interview he speculated about eliminating the income tax entirely.

Candidate Walker was very careful to keep proposals vague. Reducing taxes is always a winner politically until one gets to what programs would be cut or which other taxes would be increased.

Mary Burke learned to her regret the advantage Walker gained by keeping his proposal vague. Apparently reacting to Walker’s speculations about eliminating the income tax and calculations that one way to do that would be to increase the sales tax to 13 percent, in an interview she contended that Walker planned to do that. For her trouble, PolitiFact rated her statement as “pants on fire.”

A recent report from a series of public “workshops,” chaired by Lt. Governor Rebecca Kleefisch and Revenue Secretary Rick Chandler avoids specific recommendations. Instead it summarizes comments from the workshops in a list of five concerns, headed by the property tax and the personal income tax. The third major source of state revenue, the sales tax, is not included. (The other three concerns are tax law complexity, small business taxes, and cost of government.) This could give credibility to speculation that Walker will propose decreasing the first two taxes by increasing the sales tax, in the process making Wisconsin taxes more regressive. 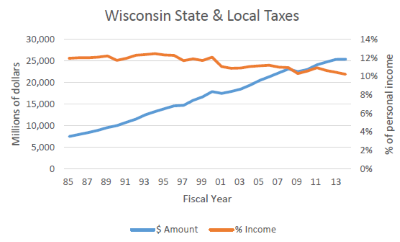 The Kleefisch report seems intent on promoting the notion that Wisconsin’s tax burden has increased over the years, even though the figures it includes show the ratio of taxes to personal income dropping from 12.2 percent in fiscal year 1991 to 11.0 percent in fiscal year 2010. Yet it claims that between 1990 and 2011 total Wisconsin state and local taxes grew at an annualized rate of 4.3 percent while personal income grew 3.9 percent per year. If true, taxes as a fraction of personal income would have grown instead of declining.

Will Walker’s tax agenda increase income inequality? There are reasons to expect this. The governor swims in an intellectual sea that is overwhelmingly hostile to progressive taxes. Making Wisconsin taxes more regressive would likely improve Wisconsin’s ranking from organizations like the Tax Foundation, ALEC, and of the others that purport to rate the “business friendliness” of states. Locally the conservative Wisconsin Policy Research Institute (WPRI) commissioned a report advocating expanding the sales tax to additional items, such as food and gasoline in order to reduce the income tax.

At the same time, Walker is a very canny politician and seems well aware of the danger to his national ambitions if he is accused of increasing Wisconsin’s income inequality. Sensitivity to the charge of redistributing income upwards was likely a consideration in deciding to reduce lower-bracket income tax rates more than upper-bracket rates. The Kleefisch report also reflects this same sensitivity, by including a chart showing the distribution of benefits to different income levels using income increments of $10,000. This approach takes advantage of the fact that there are a lot more taxpayers in Wisconsin making between $40,000 and $50,000 than those between $240,000 and $250,000. 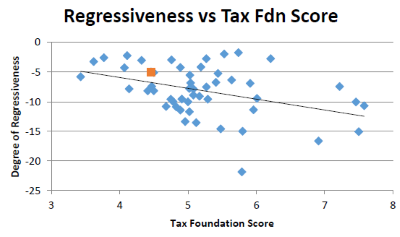 Every state’s tax system is regressive when taken has a whole, but some much more than others. To get an idea of the magnitude, I calculated the slope of a line drawn through ITEP’s seven income categories. If the slope were positive, higher income taxpayers would pay a higher portion of their income than lower income taxpayers. As you can see in the chart to the right, no state is at 0 degrees of regressivity and Wisconsin (marked in orange) is about five percent regressive.

The lower a state falls on the vertical scale, the more regressive its tax system: the lowest state is more than 20 percent regressive. Wisconsin, while regressive, is still less so than most.

The horizontal scale shows the score the Tax Foundation gave states in its most recent ratings. Since the foundation is open in its dislike of progressive income taxes, it is no surprise that states with more regressive taxes as a group score better.