The city once had a dense system with 20 routes that helped change the city. Why did it die and what is its legacy? 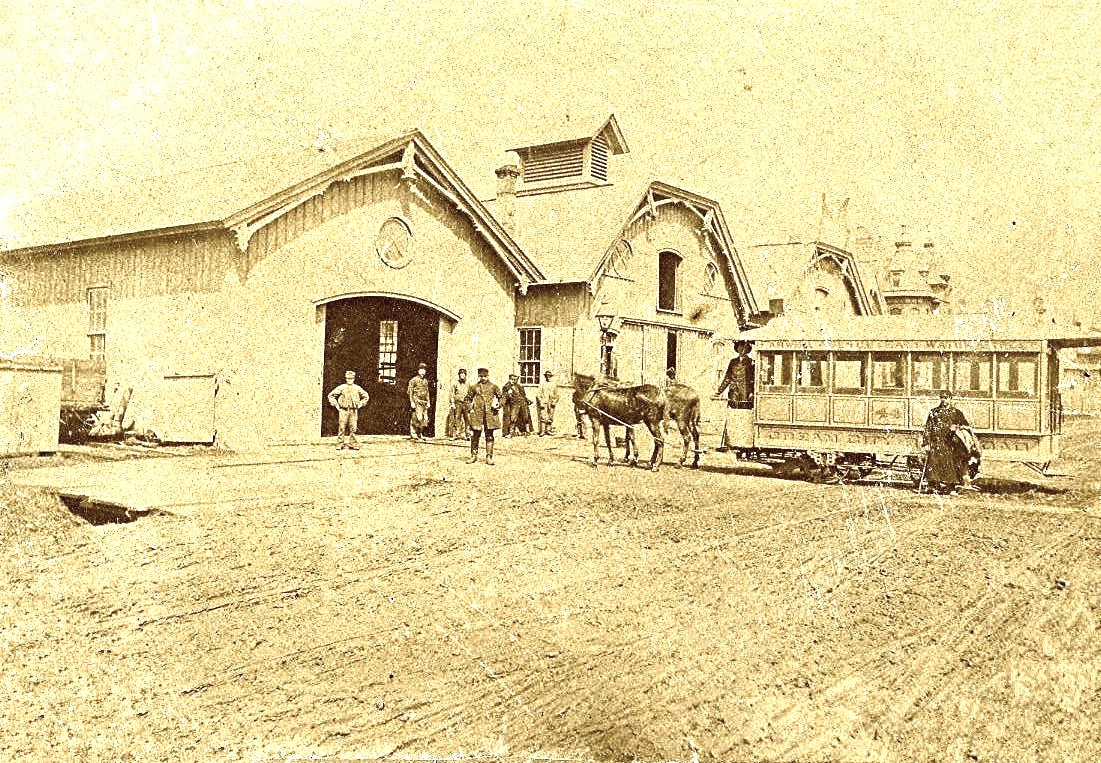 After repeated attempts to stall its passage, a new streetcar project was approved for Milwaukee and plans are underway to construct it. As the city embraces this form of transit, its worth looking back to the past and to the decades of experience Milwaukee had with an older form of the streetcar.  Whatever happened to the original streetcars?  How did they contribute to the life and economy of the city?  Are there any lessons to be learned from the historic trolleys?

Milwaukee once boasted a dense streetcar network.  At its zenith, with up to 20 routes, one could travel from as far north as Silver Spring Drive in Glendale to as far south as South Milwaukee, and as far west as West Allis or Wauwatosa. There were also interurban lines that took riders out to Waukesha or Watertown to the west; to East Troy, Burlington, southward to Kenosha, and northward to Sheboygan.

The system had humble beginnings. The present North Water Street Bridge to East Juneau Avenue saw the first horse-drawn cars on rails in the city on May 30, 1860. They were cutting-edge at the time but these horsecars suffered from serious disadvantages. The worst was the quality of service, often lacking in both comfort and speed.  The horses also struggled pulling their passengers up hills.

The horses needed feed, required adequate rest, were subject to disease — and created a lot of poo.  By one estimate, Milwaukee’s 12,500 horses in 1907 produced 133 tons of manure a day. The smell must have been something.

Inventors, including Thomas Edison, worked toward harnessing the power of electricity to replace the need for horses in urban transportation.  German Ernst Werner von Siemens was the first to electrically power a train in Berlin in 1881. Later in 1884, native-Belgian Charles J. Van Depoele of Detroit produced the first safe method of powering streetcars by connecting the cars to overhead wiring via a “troller,” as it was first called.

Appleton was the first Wisconsin city to capitalize on the troller and electrified its rail network in 1886.  Milwaukee followed suit in April 3, 1890.  The city’s delay could be blamed on the fact that electricity was still a novel concept. Many feared electrified streetcars were dangerous and would turn the city “into a regular angel factory.” Fortunately, heaven had to wait, as the streetcars didn’t electrify people.

The streetcars would go on to alter Milwaukee and the nation, changing how Americans built their cities, lived, entertained themselves, and conducted business. The streetcar allowed people to live further away from the bustle and pollution of the city.  This  led to the early growth of suburbs such as Wauwatosa and South Milwaukee.

Eventually the streetcar led to the segregation of how land was used, with a highly centralized Downtown, where most if not all business and entertainment was conducted, surrounded by residential neighborhoods.

This degree of centralization in Milwaukee, like other major American cities, pushed for taller buildings to allow for ever more people to work in the relatively small downtown area.  Property in Downtown, as today, was more expensive.  And land near the busiest streetcar intersections also had the highest land values.

The streetcar became an integral part of life in Milwaukee and most other American cities.  It peaked in the years between 1905 and 1915, before widespread use of cars.

So important were the streetcar lines to Milwaukeeans, that the community came together to support a strike against the corporate owners of The Milwaukee Electric Railway and Light Company.  The strike began in 1896 when TMER&L’s workers called for higher wages and unionization.  TMER&L declined to engage with its employees and brought in strikebreakers.

This was during the Gilded Age, and amidst the rampant corruption typical of the age, the public was in no mood to support wealthy businessmen who were buying their politicians. Milwaukeeans largely boycotted streetcar service. Local hotels would not provide room for the strikebreakers nor would grocers sell their produce. Even then-Mayor William Rauschenberger’s butcher refused him service over the issue.  The strike lasted for two long months before some anarchists ended public support through an attack that would be labeled terrorism today. The assailants discharged rifles at two streetcars on successive days in June. Luckily, merely one passenger was injured.

Yet the streetcar would not last as the primary means of transportation in Milwaukee. Nationwide, ridership peaked around 1920 and steadily declined except during World War II. The reasons are many. They include the changing times, the fault of the streetcar companies themselves, and government policy and regulation.

Widespread adoption of gas-powered automobiles hurt ridership. The perception of slow and crowded trolley rides in outdated streetcars also pushed riders away. Many people also preferred buses because they were viewed as the cool new thing. Exacerbating this trend, many streetcars by the 1950s were older. Due to a lack of available capital, urban rail firms were hard-pressed for proper maintenance, let alone upgrading to the latest technology. The decline in riders hurt pushed these companies toward unprofitability.

Changing economics and poor long-term decisions on the part of the urban railways also hurt companies immensely. After World War I transit companies had to contend with a huge inflation of material costs, soaring employee wages, and inability to increase fares from five cents due to contractual obligations to the cities they served. It was also expensive to maintain the portions of the street occupied by the rails as well as the rails themselves.

By this time, due to Progressive Era politics, most states including Wisconsin had public service commissions whose duty was to regulate the street railways on behalf of the public. Before widespread use of autos, people were more limited in how they could get around: walk, horses, or the streetcar. So for the public, affordable use of the speedier streetcar was a vital interest. The flip side of the commissions’ protection of consumer interest was that in many cases regulation overzealously hurt the financial stability of the companies by not taking into account profitability.  However, it should be noted that many street railway companies lost much sympathy because they were, as historian Stanley Mallach writes, often “guilty … of monopoly, financial manipulation, corruption, and gouging the public…”

Meanwhile, local, state, and federal funding of roads encouraged automobile use. This encouraged decentralization of metropolitan areas as well as harming public transit interests. The privately-owned streetcar companies received no public subsidy and were taxed by state and local governments, at times heavily.  All of these factors contributed toward the downward trend of mass transit in the United States.

Due to cost concerns, TMER&L established bus routes as early as 1920 to complement streetcar lines. The company believed it more cost-effective in many cases than installing additional rails. The first bus route went down Mitchell Street. No buses replaced streetcar lines until 1926 with the Lisbon Avenue route from Washington Park to Wanderer’s Rest Cemetery, now Lincoln Memorial Cemetery. Then, in 1931 buses took over the Oakland Avenue route from Silver Spring Drive to Fox Point.

But it was a labor strike and riot in 1934 which swayed TMER&L’s management to believe streetcars were no longer tenable. TMER&L then committed to complete abandonment of its streetcar lines. The company that is now WE Energies spun off its transit division as The Milwaukee Electric Railway & Transit Company.  As TMER&T moved away from rail transit service, it still contended with city regulation which likely perpetuated streetcar use longer than the company would have intended.

By 1950 the city was at a crossroads in examining how to proceed on transportation policy. It could push for newer streetcars with the latest technology, switch to trolleybuses tethered to electrical lines, or move toward transit service by gasoline buses. In 1948, Municipal leaders had commissioned a firm, Coverdale & Colpitts Consulting Engineers, to analyze these options to find the best public option.

The study compared Milwaukee and similar Northern cities, it examined demographic changes, the pros and cons of different transportation modes, as well as public preference. The engineers ultimately encouraged the city to fully convert from street railways to trackless transit. This was based on data showing increased public automobile use and declines in non-rush-hour patronage.  Data showed Milwaukee’s citizens preferred trackless trolleys (electric-powered buses tethered to power lines) to railed ones, and the firm argued that trackless trolleys were a better technology. Historic documents show city leaders leaned in that direction around the time of the engineering firm’s verdict.

Eventually all the streetcar lines became trackless and those later yielded entirely to the motor buses we know today.  The last streetcar ran on March 2, 1958 with many people coming out to give it one last hurrah.