High quality micro-brews and spirits are half-off for two hours every weekday.

The first time I stepped into the bar at 1875 North Humboldt it was known as Redroom and my friend Brandon Reyes was at a table in the back DJing with Prescott Sobol as Sirius Booty. It was Reyes’ debut DJ residency. Last Friday Reyes greeted me from behind the bar at what has been known as Fink’s since 2013. Redroom was sparsely decorated; the only memorable element was its signature red lights. Fink’s has added booths, tables, pinball machines and a woodsy aesthetic, the latter a common theme among the city’s cocktail joints.

In addition to the outdoorsy decor, the walls at Fink’s are adorned with posters from various craft distilleries and breweries. These were not chosen at random; they represent past and present beer and cocktail offerings or “takeovers,” as they’re dubbed here. Each month a fresh batch of kegs from a different craft brewery are tapped and spirits from a new distillery are incorporated into their drinks lineup. This month they have Ballast Point beer from San Diego, CA and Journeyman spirits from Three Oaks, MI. If you’re not into trying new things, you can always count on either Spotted Cow or Riverwest Stein to be on tap.

Fink’s opens at 4pm on weekdays and their happy hour runs until 6pm, with all taps and almost all cocktails half-off. Considering the high-quality brews and hooch, this is one of the most bang-for-your-buck deals in town. Fink’s is a “spirit forward” cocktail bar (read, strong drinks), so I ordered a “Hood Billionaire” (sloe gin cocktail) and let my week melt away. Then I sampled some of Ballast Point’s best; the Indra Kunindra, a spicy Curry Expo Stout, the Dorado, a sturdy Imperial IPA, and the Grapefruit Sculpin, an IPA with grapefruit. (Their selection of Ballast Point is mostly pales.) They also have O’so Brewing Company’s Sweet Lady nitro milk stout on tap.

The half-off happy hour isn’t the only special going at Finks. Each day has its own $5 cocktail, $3 shot and $5 shot and PBR combo. Pints are only $3 on Sundays. If you’re old school and yearn for Old Fashioneds ($5 on Sundays), they have classic cocktails to compliment their house cocktails (and usually a pair of house shots). Liquor is sold by the ounce at Finks, with about 60 varieties to choose from, many of which are hard to find. They carry 90 bottles and cans, focusing on quality American craft, but also rare imports and large format. Domestics are only $2 on Mondays. Wine isn’t forgotten, with five options by the glass or bottle. If you read the menu closely you’ll find some choice Drake quotes, thanks to manager John Van Lieshout’s love for Champagne Papi. (Finks doesn’t offer anything to eat, but you’re welcome to bring in food from BelAir Cantina, which is just across the street, and run by the same owners.)

During my visit last Friday I noticed a few groups, most likely co-workers in for a drink after their shift. Finks was actually closed for a private party on the night I was originally going to stop in. Those don’t happen very often, but Finks does host the occasional cocktail night, which are open to the public. The next one is April 2 and showcases Underberg Bitters. They’ve started DJ nights on Thursdays, so maybe Brandon will make his way back to the tables. Before I took off on Friday he did make me a sample of his Mai Tai with Campari, something he’s working on for Tiki Tuesdays, starting in June. The next takeovers will be St. George Spirits (Alameda, CA) on April 16 and Tallgrass Brewery (Manhattan, KS) on April 23. And if you miss those, there will be many other takeovers to come. 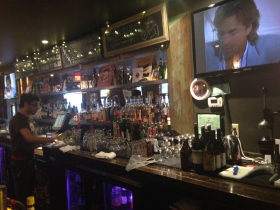 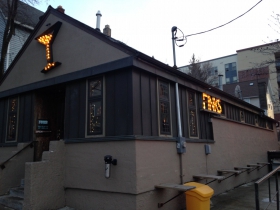 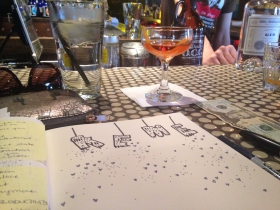 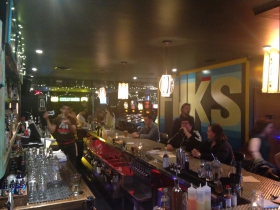 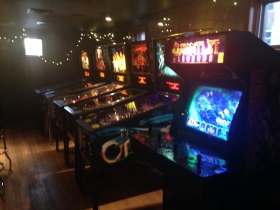 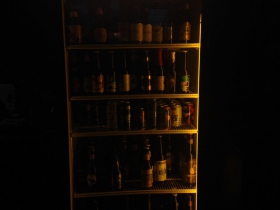