It’s almost an empty wasteland. It can’t get worse, but how much can it improve?

The intersection of N. Water and E. Knapp streets is practically empty. Normally some green space in a downtown would be a welcome respite from all the concrete and infrastructure, but this space isn’t green. It’s brown and dusty and quite an eyesore. It’s composed of an ugly parking lot, an unkempt field, and a passable burger joint, In fact, AJ Bomber’s is the only structure on this corner. The burger shop’s building has some charm, I suppose, but that’s not enough to save this corner.

Water and Knapp is a prime, downtown location, tucked between Schlitz Park on the riverfront, the bar district on Water Street, and the Milwaukee School of Engineering. Developers are already vying for the space. But as snow covers this barren corner until spring, it’s a good time to think carefully about what will best fit at this intersection and what will benefit the neighborhood most.

This space is a blank canvas with a great foundation: its spectacular location. Truly, it’s an area that is becoming ever more popular, and sees thousands of diverse Milwaukeeans pass through it on a regular basis. With a solid mix of student apartments, office buildings, restaurants, hotels and condos, the neighborhood receives considerable foot and auto traffic. The corner is also well serviced by the 57 and Green line bus routes—reaching West and North-South, respectively—so it can bring visitors from outside the immediate neighborhood. This intersection is also right next to the river, meaning it has the potential for attractive views and additional foot traffic along the waterfront during warm months.

The good news about the corner’s lack of development: at least it’s not occupied by a strip mall or massive parking structure or suburban-style big box store. It’s also better than what it used to be. The former Park East Freeway used to cut directly across Knapp and Water, making it essentially a non-place, a passing-through zone. Thank goodness the city demolished that. That history, of course, explains why this intersection is virtually empty now, and why it now has the potential to be a far more vibrant place.

As noted, the corner is largely occupied by parking lots and an abandoned, overgrown weed-filled triangle. The whole space resembles a soccer field after a zombie apocalypse. And it’s a big area, which means that unless a developer snaps it up for a single, massive complex, it will take several small buildings to fill it up. One or two stand-alone establishments will still leave the corner looking empty, and won’t be enough to draw the traffic it needs.

The roadways running through the intersection are also a problem. First, they don’t quite line up properly, making them awkward as a pass through and turning area, especially for the unfamiliar driver who might be coming off I-43. On top of this, the neighborhood is a drunk-driving hazard zone almost any night of the week, but especially Friday and Saturday nights. Cars driving too quickly around unpredictable curves with potentially intoxicated drivers is a mess indeed. That will be a consideration for any developer wishing  to build at this intersection. Traffic calming might be necessary if the intersection is to be connected to the walkable areas of the downtown.

Meanwhile, this intersection is not really serving anyone, besides the people who choose to park here, and customers of AJ Bombers. Why would a MSOE student ever want to walk this way? Why would a downtown employee ever give this corner a second glance? Why would a resident of the west side ever have reason to ride the 57 bus this far east? It looks like a neglected plot on the edge of town, even though it’s close to so many denser areas.

How Can We Improve it?

What the intersection doesn’t need is another condo, parking lot or grocery store. The neighborhood already has plenty of those. What it needs is to be connected, to link to the superior spaces around it. Any building or structure that’s useful for the community could create a connection to the restaurants on Brady Street, the offices in the Downtown and to the west, and the residences and churches to the east.

Marcus Corporation had proposed to create a movie theater complex with offices and restaurants in this area, but, as the Business Journal reported in October 2014, Marcus Corp “was unable to secure tenants and never moved forward.” Now, the lot is being pursued by Hammes Company, a real estate developer who hopes to use the space for an “office development.” An office development might be the most realistic move for this space. Downtown businesses are growing and the neighborhood is becoming a more popular place for Milwaukee companies to locate their offices. Manpower is just across the river. Lot prices will undoubtedly increase in this area. Wealthy developers might be the only ones willing to take a chance on a space of this size. 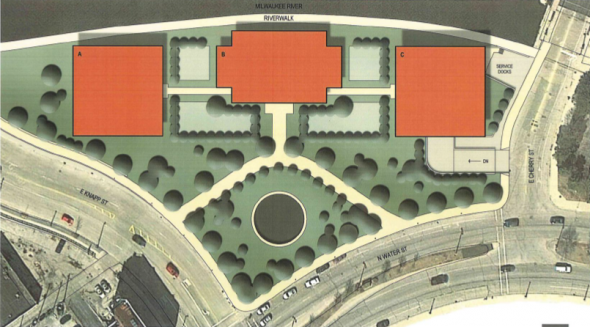 That being said, the Hammes proposal leaves something to be desired. The design doesn’t look particularly inviting, or attuned to the setting.  For one thing, it still leaves a fair amount of empty, purposeless space. For another, while the proposed buildings do offer river views for occupants, they cut off sight lines to the river for everyone else. Of course the rendering is just a starting point.

What else might make the space better? Some more outlandish ideas come to mind: What about a public swimming pool? Perhaps a daycare with a play space? Or an urban garden? Maybe a more realistic idea is a hotel. The Aloft, the Intercontinental and the Hyatt Regency (to name a few) have been successful in this neighborhood, meeting the travel needs of downtown companies and bringing customers to local restaurants and bars. And hotels often grow in bunches.

Before any of that happens, though, this would be a fantastic spot for a farmer’s market or flea market in the summer to test out the viability of the space. During Christmastime, a few tree sellers set up camp in nearby empty lots in this neighborhood, making perfect use of neglected space. I bought a tree from one of these stands simply because I saw it out my window on my bus ride home from work. This might also be an ideal area for a pop-up market of some kind. It would slow down traffic, increase local food options and fill this empty space with activity.

For an intersection this vast, the possibilities are endless. Developments are likely to come. Let’s hope the city makes wise choices as to which ones it decides to approve. 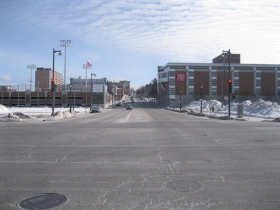 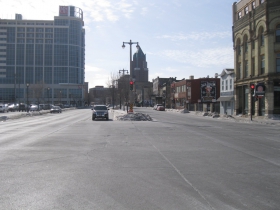 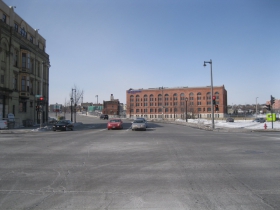 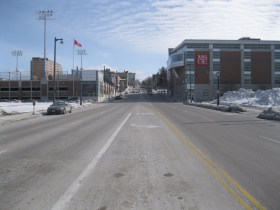 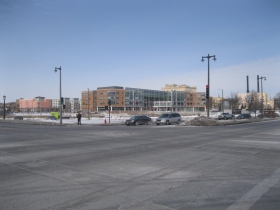 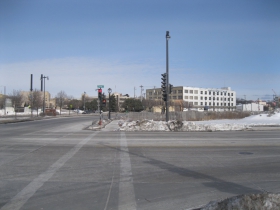 14 thoughts on “Intersection: Water and Knapp”