Meraki Offers Snacks And a Show

The new Walker’s Point restaurant/bar offers unique snacks and the chance to watch the chefs at work.

There has been a flurry of development in Walker’s Point these last few years. It’s fast becoming the hippest neighborhood in the city, with business and residential spaces popping up and laying claim to abandoned and underused properties all over the Fifth Ward. South Second Street is one of the hotbeds and its latest culinary offering is Meraki on the corner of 2nd and Mineral. How does Meraki set itself apart from the rest of Walker’s Point culinary scene? Well, a solid happy hour is a start.

Meraki opened just a couple of months ago, so its happy hour is a work-in-progress. Thus far the star is the half-priced bar snacks, which already retail at $3 to $4. The majority are bready, a natural match for alcoholic beverages, plus two odd balls. The first is their kimchi, a somewhat sour and spicy fermented Korean veggie dish, which I loved. I once stayed with a Korean-Canadian friend in Victoria, BC and his mom brought over like seven varieties of kimchi to accompany his amazing pork shoulder soup. I became a big fan of Korean food.

The bar at Meraki.

The second odd ball bar snack at Meraki is the boquerones, or freshly cured anchovies popular in the south of Spain, which were unfamiliar to me. I’m not an anchovy guy, but I gave them a try. After all, Meraki cures them in house and roasts them on a crostini. I had a nice chat with owner/head chef Chad Meier who explained the main reason they made the menu is that at the end of the day he likes to eat them with a glass of beer. Their saltiness definitely demands something thirst quenching. Luckily, Meraki has a number of options on discount during their happy hour (4:30pm-6:30pm, Monday-Thursday).

A rotating selection of tap beers are $1 off during happy hour, as well as half-priced glasses of wine. Left Hand’s Milk Stout is the only draught that has stayed since their December 15th opening. Lakefront’s Big Easy has been available the last two weeks. The other three options were different on the two nights I stopped in over the last week. If you visit anytime soon I highly recommend the Great Lakes High Striker Belgian Pale Ale, a limited release. Meraki’s craft cocktails and cheese/charcuterie look great, but are not part of the happy hour.

The most recently added bar snack is their chive-cheese puffs, featuring an award-winning manchego-style Wisconsin cheese (GranQueso). Those bad boys are scrumptious. They’ve been making crackers with duck fat since the beginning, but a couple weeks ago Meraki got duck molds, enhancing those tasty treats. The other cracker is their homemade cheese nips, pastry chef Chelsea Rolander’s signature item. The nips upgrade the original without too much fluff, and I especially love the extra crispy ones. Last night the butter for their soft semolina bread was made with toasted fennel seed, roasted red pepper, garlic and thyme, an excellent combination.

Besides the interesting happy hour, Meraki is setting itself apart with their presentation kitchen. If you choose to move from the bar to the dining room, you can watch the chefs at work or enjoy your meal in a more traditional setting. The savory snacks and quality drinks will prepare you for a satisfying meal, no matter the setting. 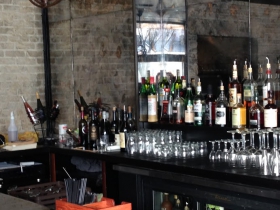 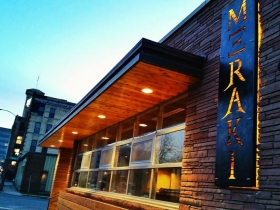 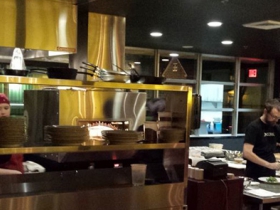