So Many Shows, So Little Time

Great art and great crowds, but I couldn’t help imagining what it would be like with a streetcar connecting all the galleries.

The streets of Milwaukee, quite passable and rather walkable even in good shoes, were well-trod by the thousands who made their way to the 38 official (and many more unofficial) participants of the four-times-a-year art event, presented for its 27th year by the Historic Third Ward Association.

A first stop for many was Urban Milwaukee: The Store, 755 N. Milwaukee St., where “Milwaukee Love for Gallery Night (featuring Jake Rostermundt, Brittany Higgins and DearMKE)” gets the award for longest art show title.

The handsome Rostermundt, who goes by Jake Rost for professional reasons, specializes in photographs of the city, taken in all seasons. His business card shows an image of City Hall seen from the south. A tantalizing pyramidal abstraction covers the bottom half of the image. It takes a minute to realize it is the double yellow stripe in the middle of N. Water St., and a shiny strip of black tar holding the roadway together. Rostermundt must have had to squat in the middle of the city’s most significant intersection to get this shot, taken from just an inch above the pavement. Other images in the show are from similarly adventurous vantage points.

Fellow photographer Brit Higgins shows old places from new perspectives, including a southbound look across the Edward D. Holton Marsupial Bridge that must have been taken from high up a railroad embankment retaining wall. No wonder photographers have such a hard time getting life insurance.

The audience was largely from the urban young professional set, just exactly the kinds of folks who will be taking the streetcar to Urban Milwaukee: The Store not too many Gallery Nights from now. Next door, at an adjoining suite at 757 N. Milwaukee St., a storefront that is soon to be “Rock Paper Scissors” was turned into an impromptu movie theater for the screening of DearMKE, a series of twelve short films that “tell Milwaukee stories in an organic, unscripted way,” as the film’s promo notes.  Among the films was one of artist Reginald Baylor preparing for an earlier Gallery Night at his Plaid Tuba studio in the Historic Third Ward.

While the Third Ward is certainly the nucleus of the events, with the Marshall Building its Ground Zero, the art night contagion has clearly spread throughout the surrounding neighborhoods. You know, the kinds of places that will soon be readily reachable by streetcar, like the Grohmann Museum at MSOE, 1025 N. Broadway, located a very walkable two blocks from a planned stop on the route’s first phase.

Gallery Night was the opening of its latest exhibition, “The Art of the Milwaukee Road,” a rail-themed exhibition, appropriately enough, featuring “paintings, prints, maps and photos from a time when railways and the Milwaukee Road formed the backbone of local, regional and national industry and transportation.”

A lecture hall was filled to capacity by an audience awaiting a program on the exhibition. Most of the items are from the Milwaukee Public Library’s Milwaukee Road collection, one of the city’s major archives. An exception is a rather abstract 1960’s painting of one of the Milwaukee Road’s Illinois facilities, painted by a little known artist who signed his work, “Miller.”

The painting had hung in the offices of Larry Adelson, whose job was to terminate the affairs of the bankrupt railroad. When that messy process was completed, Adelson was easily convinced that the Grohmann collection would be a good repository for the work. It hung in a classroom facility for about 10 years or so until James R. Kieselburg II, the museum’s director, appropriated it for the show. “And now I want to keep it!” he said.

Among the attendees was Andy Nunemaker, who visited with a friend and appeared quite impressed with the event. The House Confidential honoree is one of Milwaukee’s more active collectors.

While the lecture went on at the Grohmann, so did business at DeLind Gallery of Fine Art in the venerable George Watts & Son building at the northwest corner of E. Mason and N. Jefferson streets in East Town. Bill DeLind is offering selections from his personal collection, gathered over the course of a half-century, and each bearing the date of its acquisition.

A Don Nedobeck portrait painted in watercolor in 1969 (and added to DeLind’s collection that year) shows the influence of Karl Priebe’s exotic female portraits, like those of Billie Holiday.

Over at  St. Paul Seafood in the Milwaukee Public Market, where the streetcar is expected to bend the corner on its route between the Amtrak station and 100 percent of downtown’s hotel rooms, Patrick Nedobeck, the painter’s son, said he would take a look at the painting, whenever he could take a break. Meanwhile, time’s a-wasting to get your 2015 Nedobeck cat calendar, available at the fish market.

The streets were teeming with life in the vibrant Ward, with great constellations of Gallery Nighters making their way to the Marshall Building. Among those were architect David V. Uihlein, Jr., whose magnificent McGeogh building is just a stop away by streetcar.

While groups congregated in anticipation of the arrival of the city’s slowest and balkiest elevator, the Elaine Erickson Gallery glowed with the subdued light of Joseph Friebert landscapes. Friebert (1908-2002) was a Milwaukee artist and UW-Milwaukee art professor who remained productive over a six-decade span.

He was one of those 90-year olds who kept abreast of alternative newspapers and outsider viewpoints. This will be the last time his remaining paintings will be together.

Friebert shows many influences of the Social Realists, with a painterly technique that was as varied in its application as his prevailing earth tones were muted. Friebert wasn’t one to splash around a bunch of bright pigments on his landscapes. This is quite understandable when the images are those of a smoky, hazy, winter-dim Depression-era industrial Milwaukee cityscape. But when he deigned to use a drop of red paint in a composition, it meant something.

Timothy Cobb Fine Arts, also in the Marshall Building, had a remarkable array of paintings and objects, much of it suited for display in rooms of the older, grander and more venerable sort. He has a penchant for certain items of the Art Nouveau period, priced for much less than you might expect. A recent Susan Falkman sculpture evokes the haunting imagery of the St. Gaudens 1888 sculpture entitled, “Grief,” a memorial to Clover Adams, wife of Henry Adams, found in Rock Creek Cemetery in Washington. Falkman has a highly developed skill at creating folds of fabric from solid, unyielding rock. [We have our own funerary St. Gaudens bronze here in Milwaukee at the T. A. Chapman grave at Forest Home Cemetery. Although solemn, it is practically jolly compared to the somber memorial to Adams, who committed suicide.)

Upstairs at the “Too Much Rock for One Hand” gallery, owner Fred Gillich kept up a lively conversation with visitors to his very urban and heavily Milwaukee-themed shop. Later, he joined Ted Bobrow for a midnight snack at Bel Air Cantina.

The Portrait Society, owned by Debra Brehmer, lived up to its calling with a show entitled “Androgyny,” straightforward photographs of the namesake subjects by Milwaukee artist Lois Bielefeld.

Finally, after starting the evening with a film about Reginald Baylor preparing for an earlier Gallery Night, a stop at Plaid Tuba, his thriving factory in the Marshall Building, proved a fitting capstone to the activities. By then Baylor had left, but not before working out a few details on a new, virtually monumental-scale commission. Baylor’s works are always in progress, and he keeps things hopping at his studio. 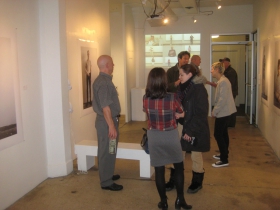 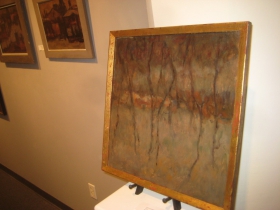 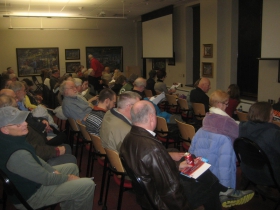 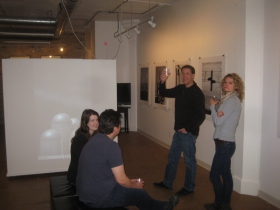 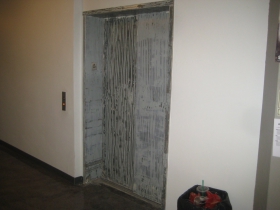 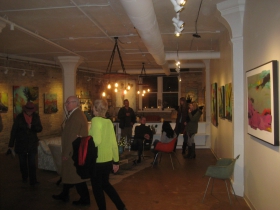 0 thoughts on “Gallery Night: So Many Shows, So Little Time”