With 26 rooms, a pool and huge coach house, the entrepreneur and philanthropist Andy Nunemaker has plenty of room for company. 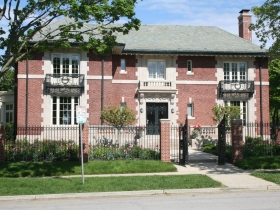 To commemorate Gay Pride Week in Milwaukee, House Confidential pays a visit to the home of gay entrepreneur and philanthropist Andy Nunemaker.

As far as dream homes go, the East Side residence of Andy Nunemaker has it all. A private gymnasium, a massage room, a wine room, a full-sized Schlitz bar (stocked to the hilt and filled with authentic memorabilia), a foosball table, a tunnel to the guest house — and we’re still just in the basement! How gay is that?

The rooms upstairs on the main floor also speak of gracious hospitality. The north parlor, once decorated by Elsie DeWolfe for a previous owner, is now a dining room. So what happened to the old dining room? The huge space, added to the 1904 building during a 1928 renovation, is now a billiard room — a far better use of the grand paneled room. And it is just a few steps from playing pool to playing in the 20′ x 42′ pool, which Nunemaker dug into a sunny spot on his ample, 150′ x 150′ corner lot.

The interior needs little further description, since you have had plenty of chances to visit it. It was the 2012 Wisconsin Breast Cancer Show House, the Milwaukee Symphony Show House, as well as the site of numerous other fundraising events, including for the Cream City Foundation and a recent rally for Gay rights featuring Lieut. Dan Choi, covered here at Urban Milwaukee.

In 1903 a frame home was moved from a lot on Lafayette Ave. to this site in the Gillman and Lockwood subdivision by Clarissa M. Sanderson, who had it set upon an 18″ foundation. Within a year that home was razed, and a “permit to build, brick and stone,” was issued to W. D. Sawyer on July 23rd, 1904 for the construction of this magnificent dwelling. This $35,000 “5th Class” building, designed by Parker & Thomas of Boston measures 68′ x 56′, with a foundation 8 feet deep below grade and basement walls 20 inches thick. The top of the slate roof rises 32 feet above grade, and shelters the enormous cubic contents of 112,784 square feet. [Here is a floor plan of the “House and Stables for W. C. Sawyer” from the Brickbuilder, 1906.]

(The coach house, in a separate building, was originally that: home to four horses and several carriages, with a hayloft above. Its  main floor is now a garage capable of holding as many as six horseless carriages. It is one of the rare garages to have a basement, which measures 2,095 square feet. Upstairs is a 1,506 sq. ft. apartment with two bedrooms and one and a half baths. Let’s put it this way: Nunemaker’s carriage house is bigger than Mayor Tom Barrett‘s home.)

So, Sawyer, the original owner, got one heck of a house in 1904, but didn’t hang out there long. Sawyer sold it to Guido C. Vogel in 1908, who raised his family there until 1921, when it was purchased by Charles Kohl. He hung there until 1927 when it was bought by John Kiekhefer, who remained in the home until 1940.

It was in that year that the former Virginia Booth of Detroit, then living in the east, was sent by her husband to search for a home in Milwaukee, where he was to be relocated for business reasons. She chose this one, little knowing it was the childhood home of her husband, William D. Vogel, son of Guido C. Vogel. They raised their kids there surrounded by magnificent art until 1973, when the home was sold. The home still bares their name, being commonly referred to as the Vogel Mansion. In addition it is referred to as Greengate, and a Foursquare check-in location exists for it.

The Vogels sold the home to Warren O’Connor in 1973 for $90,000. O’Connor never used it as his principal residence, but instead held parties there, as did his kids. O’Connor was a rather strange, saturnine, business-suited man fond of yellow Cadillacs and of spending hours standing around in the gay Factory nightclub, now the site of the Broadway Theater Center. It was something like seeing Richard Nixon in a disco. O’Connor’s main residence, at 3319 N. Lake Drive, was the site of fabulous parties, and is now the home of County Executive Chris Abele, where it has been profiled by House Confidential. O’Connor died around 1990.

By that time the home was owned by Chris and Joanna Smocke, who bought it in 1987 for $300,000. Ms. Smocke told a reporter in 1990 that the place had been virtually empty during the previous decade or so. The Smockes, who had interior design (she) and construction (he) connections, commenced a major rehabilitation of the property, which a reporter found had an “educated respect for historical accuracy, a keen sense of style and color and acute attention to minute details such as door hinges, cabinet latches and the cut of window mullions.”

The City Assessor agreed with the reporter, noting in the building’s file that it was “a very complete rehab NOT band-aid like some. … All plaster redone to ‘as new’ condition, no repair seams visible. Some ornamental plaster work being repaired by ‘Julian Orlandini’ … overall one of the best updates on the east side. GRADE AA-.

Nunemaker, 45, is the CEO of Dynamis Software Corp., [formerly Dynamic Benefits Solutions, Inc.] which he co-organized in 2012. The company’s interactive software is used by health insurance brokers to compare packages with potential clients. The firm expects the Affordable Care Act to be a spur for its business.

In 2004 he headed EMServices, LLC., which he sold to Intermedix Corp. in 2010, creating Intermedix EMSystems. Previously he was CEO of GE Healthcare in Australia, New Zealand and Southeast Asia.

He has a Bachelor of Science degree in Electrical Engineering from Valparaiso University ‘91 (where he was given the 2006 Outstanding Young Alumnus Award), a Master of Science in Electrical Engineering from Georgia Tech University and an MBA from Harvard that he earned while serving as class president. [Here is a video of him speaking at the 1998 graduation ceremony.]

Nunemaker is active in entrepreneurial programs in the city, to the service of which he has lent his home, and serves on various boards, including the Milwaukee Symphony Orchestra (he chaired their ball and his home served as a show house), the Milwaukee Art Museum and the Marcus Center for the Performing Arts. In March Nunemaker was awarded the George Dalton Inspirational Entrepreneur Award by BizStarts Milwaukee at the University Club.

Nunemaker, picked as one of Milwaukee’s hottest singles by M Magazine, told a reporter  he would find it difficult to date a smoker, or anybody over 30. He maintains his eligibility by being judged by another publication as among Milwaukee’s fittest executives, thanks, perhaps to that gym in the basement.

He confesses that his weakness is art. Unlike many other Milwaukeeans with this failing, he has chosen selectively and well. One clue to his discerning eye is a Calder drawing Nunemaker found in Chicago, recognizing it immediately as a study for “Universe,” a Calder installation in the Windy City’s Willis Tower.[Image] No expert had made the link, and Nunemaker knew he had to have it. One wall of the Nunemaker home’s richly paneled library is dedicated to a Roy Lichtenstein print, and a collection of paintings by Milwaukee artist Reginald Baylor hangs in the upper stair landing.

Still, he admits his art collection is no match for that which hung in the home when it was occupied by the William Vogels.

Virginia Kingswood Booth Vogel [1908-1998]  was the daughter of Ralph Harmon Booth, a founder of the Booth newspaper chain, and later ambassador to Denmark. She married William Dickerman Vogel in Copenhagen in March, 1931, in a ceremony that brought international media attention (why not, ambassador dad owned the papers), the attendance of diplomats of many nations and orchids from the Royal Family.

Ralph Booth was also a founder and president of the Detroit Institute of Arts. His collection of Renaissance and Medieval masterpieces is the nucleus of the museum’s old masters holdings. The museum is facing threats of being forced to sell these pieces to help allay the financial condition of the City of Detroit, a move which the trustees are strongly resisting.

Virginia Booth Vogel endowed a collection fund of $1 million with the Milwaukee Art Museum in 1976 which is responsible for such purchases as the Lachaise, the Archipenko, the magnificent Philadelphia Highboy and (in part) the recent Copley acquisition.

She also contributed major works, some of which once hung in the N. Terrace Ave. home, to the National Gallery of Art, the Cranbrook Academy of Arts (founded by her uncle), the Fogg Museum at Harvard University, the Detroit Institute of Art and to Mount Vernon, to fill in a few gaps in the Washington family’s collection. 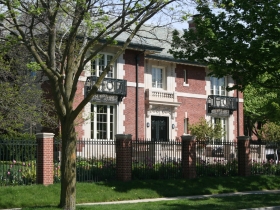 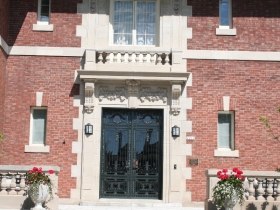 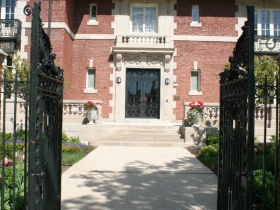 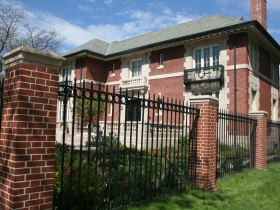 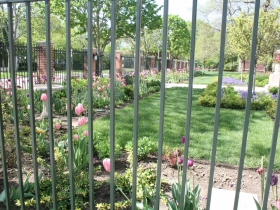