The home is reserved, restrained, dignified unto dull, not unlike its occupant. 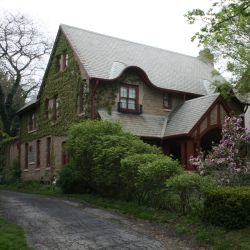 Mayor Tom Barrett was Congressman Thomas M. Barrett when he and his wife Kristine M. Barrett bought this unprepossessing Washington Heights home for $273,000 in 1999.

The 3,507 sq. ft, 2-story “plus attic guest room” mansionette has 5 bedrooms, 3 full baths, 2 half-baths, a family room and a built-in wood-burning fireplace that provides a homey backdrop for the mayor, his family and family dog in campaign literature and Christmas cards. The mayor and his wife, a school teacher in the Wauwatosa district (no residency requirement there!), raised four children in the home. According to his gubernatorial campaign website, “Their home is in the same neighborhood where Tom grew up, and is the same area he represented in the State Legislature and in Congress. Together, the family stays true to the same Wisconsin values that have guided Tom throughout his entire life.”

That may be laying it on a bit thick, but the fact of the matter is that the mayor’s residence, which dates to 1916, was built during a high time for quality residential construction. Streetcar lines stretching as far as Wauwatosa opened up this verdant agricultural glen to urban settlement in the late 1890’s. The virgin land was laid out in broad avenues and leafy boulevards, such as the one to which the mayor’s residence lends such grace and stature.

The home is sited on a 59 ft x 190 ft rectangular lot; the symmetrical structure is centered on the shorter axis, its south-facing brick walls eager to soak up the rays of the benevolent sunshine that suffuse it with warmth and light. The symmetry extends to that portion of the landscaped grounds visible to the passing public. A modest, well-trimmed hedge caps the crest of a cleanly mowed bluff. A four-step concrete stairway of becoming modesty leads to the raised plateau upon which the dwelling nestles, at one with its environment.

An asphalt driveway separates the mayor’s dwelling from the neighbor to the west, and affords convenient access to the attached, 429 sq. ft. garage.

A full, yet “unfinished” basement of 1,614 sq. ft. keeps the living floors frost-free in the winter, aided by a $9,000 boiler added to the building on January 24th, 2008 by Nimmer Heating and Air Conditioning. Yet, there was no call for Nimmer to air condition the home, where the mayor and family must sweat it out during the blistering zephyrs that so frequently characterize summer in the western precincts of the great metropolis. An underground oil tank that once stored fuel for the dwelling was removed, at a cost of $1,100, two years prior to the mayor’s occupancy.

An alley dead ends several houses north of the mayor’s, which means that he, like others similarly situated, is obliged to haul his garbage and recycling to the curb on the appointed day. [Note to Mayor: your next garbage pick up is May 21st. Whose turn is it to take out the bin?]

The home also has “dual staircases,” to ease vertical travel for the Barretts and their bounding brood. There is also a chute to send the mayoral laundry to the cellar, where the family washerwoman has a fully equipped facility with electric appliances.

The city assessor originally classified the structure as being of “mixed” architecture, but in 1991, this aesthetic decision was overridden, and “the style changed to ‘Colonial’ for uniformity.” Whatever the name, this structure has some uniformly nice elements. The vestibule floor is quarry tile, and a 5 foot tile wainscoting provides for sanitary conditions in the bathrooms. Coved ceilings surmount the second floor rooms, while 52 leaded-glass windows sparkle in the sunlight and glow with warmth on a chill winter’s eve, while in the butler’s pantry, no doubt, the mayor’s butler polishes the Barrett family silver.

The home is topped with a gray slate roof reminiscent of the salt-and-pepper hair that helmets the mayor’s skull. The facade of the building is reserved, restrained, dignified unto dull, not unlike its occupant. Yet whimsical curved dormers hint at the mayor’s humorous streak.  Sixteen electrical outlets and 10 fixtures were added to the building in 1946, during a “modernization” after the home was sold by the estate of Anna Conrad to Frank Ripple, Jr. for $20,000. The 2013 valuation of the home is at a constant $42,700 for the land and $328,800 for the improvements, giving a total assessed valuation of $371,500, down from $403,800 the year before.

The mayor’s residence was the site of two recorded service requests by the Department of Neighborhood Services. In June, 2009, the department made note of DOG BITE, “quarantined, released, notified.” The dog catcher was back again at the mayor’s house in September, 2009, issuing a report of DOG BITE (2ND BITE), “quarantined, released, notified,” which was also entered into the permanent record of the mayor’s home. Come to think of it, I haven’t seen the mayor’s dog in his recent campaign literature and Christmas cards.

How Milwaukee Is It? Mayor Barrett’s home it is about 5.5 freeway miles to City Hall, while the mayor was able to bicycle the 4.1 miles on city streets in about 25 minutes during Bike to Work Week. [See Urban Milwaukee Gallery.] 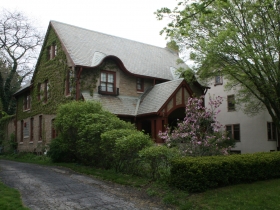 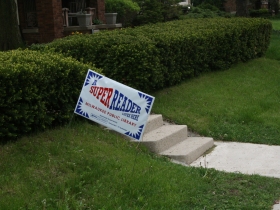 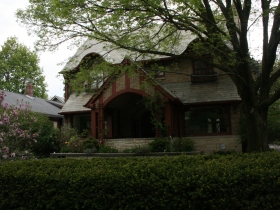 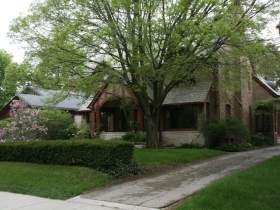