A Guided Tour of Gallery Night

Man-about-town Michael Horne captures and comments on the scene, with photos, of course.

The quarterly Gallery Night and Day was held under dampish conditions in the Historic Third Ward and elsewhere last Friday and Saturday, but any major rain held off, probably reserving itself as snowfall for the January event.

An early stop was at the Mayer Building, 342 N. Water St. for a ceremonial unveiling and dedication of a tapestry commissioned by the building’s owners and redevelopers. [See Urban Milwaukee: Restored Building will have New Artwork.]

Artist Terese Agnew, in a mini-performance piece, donned a pair of boots, and requested the attendees to either close their eyes or stare at their feet and imagine a time long ago — way before the forest primeval — when the spot where they stood was an ancient seabed.

Agnew worked her way forward in geological time, traveling through the sediment of the city’s formation, compressing a 300-million year journey into a couple of minutes.

Behind her was the 7 foot by 12 foot tapestry that had been commissioned by Richard Pieper and his daughter Ann Pieper Eisenbrown of Pieper Properties.

Agnew’s conceit for the piece — created of countless horizontal bands of colored and textured paper — was to represent the settlement of the city, both geologically and culturally.

Accordingly, the work “Settlement” and Agnew’s presentation was topped by the current layer of Milwaukee. The boots represented the necessary footgear in that spot nearly two centuries ago, when settlers began arriving, filling in the swamps with dirt hauled from the lofty river bluffs, and putting the Third Ward and Walkers Point on dry ground for the first time in millennia, if ever.

The work will be on permanent display in the lobby of the building, and it plays well against the clean lines of the lobby.

After the event, visitors were invited to a furnished display apartment upstairs, where Ann Pieper Eisenbrown answered questions about the place, joined by her husband Bob Eisenbrown. The residential component of the ferro-concrete structure is a new use and will add 15 apartments to the second floor, with 7 of the studio and one-bedroom units already leased at prices north of $1,000 per month. The building has available commercial and office space based on a variety of floor configurations. The seventh floor has already been leased by a single office tenant, although multi-tenant floors are also envisioned if the market is slack for single-office floors.

With that little bit of real estate history covered, it was off to the Marshall Building, where the retiring Elaine Erickson says one reason she’s moving to California is because she has family there and because the winter here is just getting too tough on her bones. Most of the rest of the building (with one big exception which we will get to) was hopping as usual. Clive Promhows took a break from Live Artists Studio, his own gallery, to drop in on Debra Brehmer at the Portrait Society Gallery.

Customers could buy soft drinks from a pleasant young schoolboy stationed in the hallway where artists were painting live. Visitors included Pam Percy and her husband Marty Hintz who have been busy maintaining their large vegetable garden in the Village of River Hills. Percy said that she believed her rabbit would be having babies that very evening. This miracle of life is but small compensation for their loss of one of two hogs they had raised from piglet. The animal died while on transit to the slaughterhouse, and therefore could not be processed. This represents a $2,800 loss, Percy said. The life of a farmer is tough indeed.

“La Prosette,” Anja Notanja Sieger, typed out messages and poems on a classic typewriter. Who makes typewriter ribbons nowadays? Phil Schwinn played Gypsy Jazz with “East Side Swing,” the award-winning MPS teacher’s three-man combo at Gallery 218, while Urban Milwaukee editor Bruce Murphy and his wife Rose Balistreri, back from an Italian holiday, made their way around the crowded corridors.

A noticeable dead spot on the tour was the office of the Shepherd Express, which as usual was closed. A decidedly inartistic sign on the door read “Enjoy Gallery Night & Day! (we are not open — Sorry!)”

That’s quite all right, no need to apologize. Didn’t appear to be a whole lot worth looking at there anyway.

Otherwise the building was hopping, including Fred Gillich’s Too Much Metal for One Hand, where Brenner Beer was available for partygoers. Gillich was doing a good trade in his Milwaukee-themed T-Shirts, which are silkscreened for him by Eric Von Munz, one of whose inimitable rock posters was on the wall.

“Munz prints my shirts,” Gillich said, and it was off to the Harley-Davidson museum for a retrospective show of many years of Von Munz’s colorful posters.

WMSE, where von Munz has a weekly radio show, was broadcasting live from the museum, with manager Tom Crawford overseeing the activity and handing out a few remaining copies of the artist’s 2014 calendar, a popular premium from the broadcast service of the Milwaukee School of Engineering. 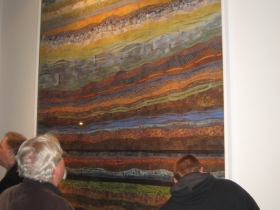 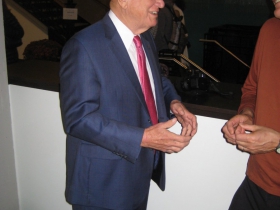 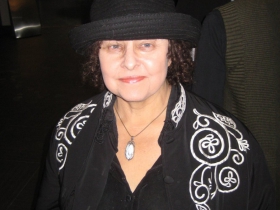 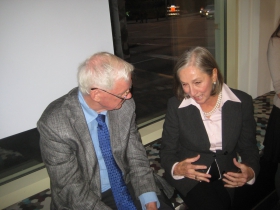 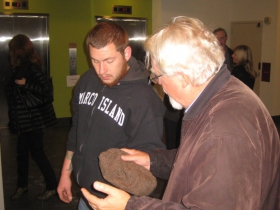 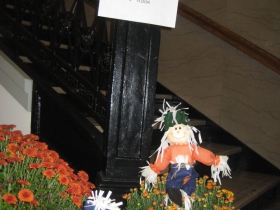 0 thoughts on “Photo Gallery: A Guided Tour of Gallery Night”