In my book, a new year should be met with big thinking and lofty goals. With that spirit in mind, I found myself atop the Pfister Hotel, the crown jewel of Milwaukee lodging, sipping sale price drinks at Blu Bar & Lounge, home to “Milwaukee’s highest happy hour.” This swanky spot 23 floors above ground is probably better known to out-of-towners than to locals, which is a damn shame. $3 bottles of local craft beer, $6 glasses of wine and $6 rail cocktails Monday through Friday from 5pm to 8pm would make for a solid happy hour anywhere. But Blu ain’t anywhere. It’s the crown of the Pfister tower and it features elegant decor, live music and excellent views of the city.

Built in 1893, the Pfister has been a Milwaukee icon for over a century. Back in 1912 an unemployed saloonkeeper from New York tried to assassinate former president Teddy Roosevelt outside the Pfister. Roosevelt was campaigning as a third party candidate on the Progressive ticket. The 50-page speech in Roosevelt’s jacket pocket slowed the bullet, which drew blood but did not cancel his appearance at the Milwaukee Auditorium.

The Pfister is full of history. It has the largest collection of Victorian art in any hotel in the country. Yet it’s also connected to the present. After admiring the ornate vintage lobby make sure to check out the latest display by their Artist-in-Residence, whose studio sits across from the elevators up to Blu.

Another option at the Pfister is people watching. It’s the go-to hotel for elite college and professional sports teams, touring musicians, dignitaries and the like. When I walked in the other night the Phoenix Suns (basketball team) gear was being unloaded in the lobby. A corporate meeting was taking place inside Blu when I arrived.

You should not underestimate a complimentary bowl of mixed nuts. Considering most happy hours coincide with dinner hours, a free snack can go a long way. Sometimes Blu has a Japanese mix, sometimes it’s mostly almonds and peanuts. Occasionally there’s dried fruit. Either way, it’s on the house. They used to offer a variety of small plates, which featured the most delicious olive marinade I’ve ever had, anywhere. But for some bizarre reason these noshes weren’t a hit, so they’ve switched to just cheese and chocolate.

When I sampled Blu’s happy hour my two favorite Milwaukee Brewing Co. creations, Louie’s Demise amber ale and Outboard cream ale, were the featured $3 bottles. I enjoyed a trio. If I was a person of means I might have indulged in their full selection of drinks, including an impressive list of martinis and craft cocktails. The Heat, a combination of Don Julio reposado tequila, Spanish licor 43, fresh lime, agave nectar, and jalapeño slice, would have been my first choice.

The rest of their drink lineup is pretty conservative. In the beer department, $5 standard domestic bottles (Miller, Coors, Budweiser), $6 imports (Mexican and European), $6 craft (mostly Wisconsin), and $6 Spotted Cow and Sprecher Double IPA on draft. Eleven reds, ten whites, five “sparkling and sweet,” and four ports make up the grape-based portion of the menu, averaging $9-$17 per glass and $35-$77 per bottle. Dark liquors include 19 scotch selections plus 26 whiskeys and bourbons. A glass of Macallan 25 year old single malt scotch is their most expensive at $158. The remainder fall in the $10 to $60 range.

Jazz is the preferred soundtrack at Blu. Any night of the week jazz will be playing on the speakers or emanating from live instruments. You can find the latter on weekends after 8pm and during the tail end of Tuesday happy hour. Also, on the first Thursday of each month pianist Dr. Jeffrey Hollander draws a crowd for his Rhapsodies in Blu series.

If you build an appetite swigging cheap drinks upstairs a tasty meal is only an elevator ride back down to earth. My night took a turn for the interesting once I made my way to the Lobby Lounge, where Valerie was tending. May 12th will be her 40th anniversary at the Pfister. She started on the 23rd floor, back when it was known as the Crown Lounge. In those days female servers wore bow ties, short skirts and bunny ears. It was the Hugh Hefner model of the 1970s. A Joan Rivers show at the Crown cost just $5.

The Lobby Lounge does not technically have a happy hour. However, a person plays the piano from 5pm to 8pm and 9pm to midnight 365 days of the year. It’s hard to put a price on that. During my visit downstairs I was lucky enough to be handed a sample of Valerie’s Holiday Glögg, a soul-warming blend of brandy, bourbon, red wine, cider, honey, cinnamon, nutmeg, clove, orange slices, and green and red apples. A Scandinavian man joined me in the tasting and noted the similarity to a seasonal drink back home. I settled in to sober up with a delicious pork belly grilled cheese sandwich with a side of tomato basil soup.

Across from the Pfister on Wisconsin Avenue is an office building that houses the Wisconsin Athletic Club (WAC) downtown branch. I hold a membership to this chain of fitness centers, which have a relationship with the prestigious Milwaukee Athletic Club (MAC). Because the downtown WAC does not have a pool, my membership gives me reciprocity to the MAC. My discounted visits to the MAC remind me of the Blu happy hour, an extravagant downtown experience at a cut rate. High above our fine city you can find dive bar prices. Hey, it’s 2015. Anything is possible. 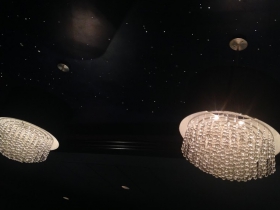 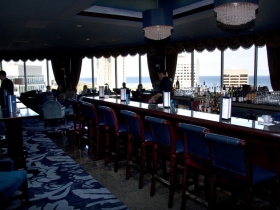 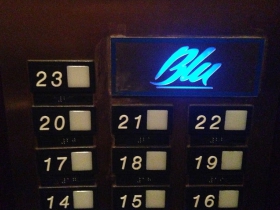 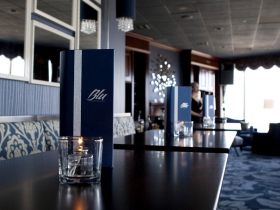 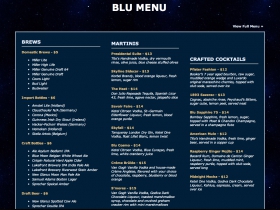 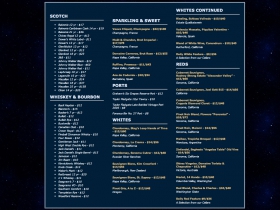