It’s one of the city’s most successful corners. But it could still improve.

It’s 11pm on a Friday evening and you’ve had a few drinks with friends, but now you’re craving a salty, tasty bite to eat before you call it a night. Where is your go-to spot? For many Milwaukeens, it’s Oakland Gyros—the decades-old Greek restaurant on the corner of N. Oakland Ave. and E. Locust St. on the East Side, serving up some of the best gyros, shish kabob and pita bread for miles. But there’s more to this corner than just Oakland Gyros. That establishment is an anchoring point for the neighborhood, and a business that encouraged others to make their home here. As a result, there are now dozens more reasons to visit this corner.

Oakland and Locust is booming. In addition to the Greek fare offered at Oakland Gyros, “Oak and Loc” has several other Mediterranean restaurants flanking its streets, plus pizza at SoLo, Irish food and drink at the Black Rose, Middle Eastern specialty food at Shiraz, and fast food from a number of chains including Five Guys, Cousins Subs, and Subway. That’s at least three different ethnicities represented on one corner, not including the ethnic diversity of the customers who frequent those businesses (of which I saw African American, Hispanic, Asian, and Greek all in the span of a few minutes). Not only is this a great food location, but it’s also a place to purchase used items at Goodwill, medications and other necessities at Walgreens, and beer at Gilbert’s Liquor. As if this weren’t enough, Oak and Loc also offers a number of services, including a laundromat, barber shop, salon and printing & graphics store. Finally, with apartments above most of the business on this corner, you can even live here for an affordable price. In short, this corner is an ever- blossoming location that meets the needs of a variety of people, both from the neighborhood and from around the city and suburbs. College students from nearby UW-Milwaukee and high school students from nearby Riverside University School both benefit from the cheap food options in particular.

Oakland and Locust succeeds not just in having a terrific array of businesses, but also in presenting them attractively and cohesively. The storefronts are varied in appearance, from the fire-colored mosaic outside SoLo, to the black, wooden paneling of the Irish pub, to the classic blue awning of Oakland Gyros. It’s not necessarily a corner anyone would visit to admire the architecture, yet the variety provides aesthetic interest and suggests the organic nature from which businesses have bloomed on this corner, during different decades and eras.

The parking situation is also fairly ideal, with a few lots outside of select business that are well-placed but not dominant in the landscape. And there’s plenty of street parking too. Bus access is also ideal. Finally, this is a fairly pedestrian friendly neighborhood. On the Saturday afternoon when I visited this corner, soft snowflakes were drifting down from the sky, and dozens of people were out enjoying a day with their families or finishing up their Christmas shopping. These included students from UWM, senior citizens, and parents with children. With plenty of “No Turn on Red” signs and good walk signals, traveling by foot is not a problem.

It’s important to note that the success of Oakland and Locust did not happen overnight. It came through the hard work of local businesses, neighborhood groups and Milwaukeens who were dedicated to frequenting these businesses. The Murray Hill Neighborhood Association and the Oakland Avenue Business Improvement District #31 have both played important roles in supporting this corner’s growth as a thriving commercial spot. Visible evidence of this includes banners around the intersection reading “Oak & Loc,” which provide character and identity for the corner, in addition to the charming lamp posts from which they are hung. At this time of year, the lamps are also adorned with festive wreaths. Trash cans keep the sidewalks fairly clean and bike racks abound. The dedication of business owners, customers and the government, made Oakland and Locust the successful, exciting district that it is today.

In spite of its major accomplishments this corner isn’t quite perfect. (Show me one that is.) The biggest issue that stands out is the presence of so many chains. Oakland and Locust feels like a neighborhood corner where small business is flourishing. I hate to see it overrun with so many fast food joints. This problem isn’t unique to Oakland and Locust. Chains creep in everywhere where business is successful—from the Starbucks in the Third Ward, to the Qdoba downtown on Water Street, to the Jimmy Johns on Kinnickinnic in Bay View. I would love to see the Business Improvement District take a harder line on so many chains, especially the three sandwich shops on the corner. It’s clear there’s a market for cheap, quick food—between the college, the high school, and the other residents nearby—but Milwaukee has so many fantastic, affordable food options locally. If local cafes could take over even one or two of the spots on the corner, I have no doubt they would present better looking storefronts and keep more profits in the community.

I’ve already praised this corner for its success and welcoming atmosphere, so the improvement I’m proposing is not a necessity, just a suggestion. It would be fun to see this commercial strip truly embrace its multiethnic roots. I grew up in Minneapolis and I always thought that one of the best streets in the entire city was Nicollet Avenue, which has been dubbed “Eat Street” due to the fantastic global cuisine available all along the street. It stretches for several blocks and has embraced its identity as a food destination, drawing tourists, downtown employees on their lunch breaks, and families from around the world who reside in Minneapolis and want a taste of their home. Oakland and Locust is a much smaller area, but if a couple of other diverse restaurants took the place of Subway and Cousins Subs, the corner could win a reputation as a multicultural spot.

Overall, Oakland and Locust is a successful corner, built on the shoulders of diverse business owners and community members. But it can and probably will continue to get better. 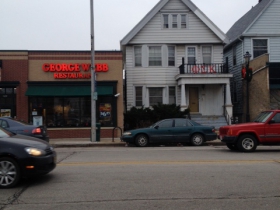 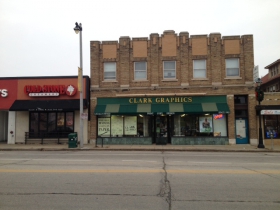 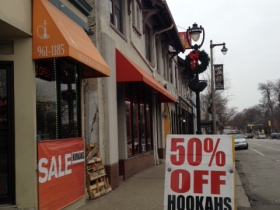 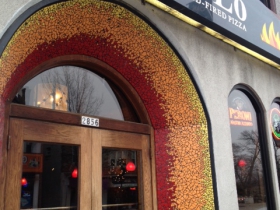 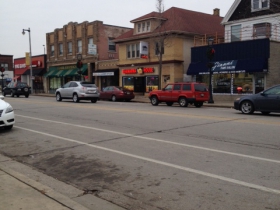 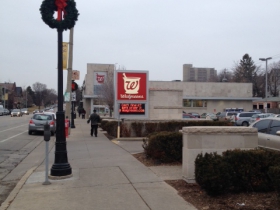 Correction: The story originally identified the East Side BID as working in this area.  The story has been updated to refer to the Oakland Avenue BID #31 as the organization representing this intersection.

23 thoughts on “Intersection: Oakland and Locust”