Two empty buildings with great potential call out for new owners and activity.

Holton and Center is an unobtrusive corner. You’d hardly think twice about the little storefronts as you ride by in your bicycle, car or on the Route 15 bus. But N. Holton street marks something of a dividing line between the Riverwest and Harambee neighborhoods. Just east of the intersection lies a commercial strip popular among Riverwest residents and some from outside the neighborhood, including such mainstays as Mad Planet dance club, Fuel Café, Truly Spoken Cycles and the popular Italian restaurant, Café Centro. To the west of the intersection, you’ll find two small corner stores and the All People’s Church. Two distinct neighborhoods, the integrated Riverwest area and the largely black Harambee neighborhood, are separated by this thin line. So how does this intersection function? What works and what could be improved?

The corner of N. Holton and E. Center streets is flanked by two convenience/liquor stores which seem to do a decent business. On another corner, a wide empty store front, where the now defunct Krueger Bakery stood from 1903-1994, sits with its shades open, some random pieces of furniture inside. Maybe it’s on the way to becoming something, but for now, it’s quite forlorn. All of these stores have small apartments above them, making for a nice mix of residential and commercial space. The one building that makes this corner architecturally striking is the massive, white-columned neoclassical structure at 500 E. Center St. Almost a century ago, it was built to house the Holton Street Bank. Then throughout the 70s and 80s, when the corner could no longer support a bank of that size, various education programs moved into the building. (It still bears the name, Center for Children Head Start.) Now, however, it’s unoccupied. Thus, this corner is quite imbalanced, with two corner stores on the Harambee side of the street and two grand, but vacant, buildings on the Riverwest side.

Holton and Center is currently functioning as a quiet neighborhood spot. It’s where you go if you need a gallon of milk or a pack of cigarettes, or if you need to catch the bus in this neighborhood, since it’s home to two bus lines, the Route 15 going North/South and the Route 22 going East/West.

There’s also some great historic architecture. The old bank is magnificent, and it’s such a shame it’s not being used. Its big bold columns and pearly white tiles create a distinctive profile on this otherwise unexciting intersection. The vacant building across the street also sports an intriguing retro facade, suggesting a cross between a 1920s hotel and a 1950s diner. All in all, the area has some solid and attractive infrastructure which has seen it through many diverse eras in Milwaukee, and will undoubtedly last through many more. Unfortunately, little of that is currently being used.

Another positive aspect of this corner is that it reflects a neighborhood-wide effort towards more pedestrian friendliness, something that is particularly vital for communities that may be lower-income and thus more inclined to walk or take the bus. The curbs on each corner have been extended for easy wheelchair and stroller access, and planters have been placed at varying points along Holton, although they are naturally empty at this time of year. The planters can sort of be used as benches while you’re waiting for the bus, too.

If the convenience stores are an asset for the neighborhood (that point might be debatable, depending on what their primary commodities are), they are this corner’s only asset commercially. It doesn’t have any restaurants or gas stations or drug stores. That might not be necessary, considering how much commercial activity goes on down the block on Center St. (restaurants, a book store, a hair salon and a bike shop, to name a few). Still, the fact that this corner is fairly empty suggests a definite end to the commercial action on Center Street. It declares you’re crossing into a new and different neighborhood.

The abandoned buildings also detract from this corner. Their architecture is notable, to be sure, but without anyone filling them, they seem lifeless and dark. To make matters worse, the old bakery building has hostile signs all over it warning passersby they are being watched on video camera and cannot loiter—a particularly maddening statement considering there’s a bus stop right in front of the building.

I see two main areas for improvement here: filling the vacant properties and sprucing up the corner to make it more attractive.

First, the old bank building has the potential to hold any number of businesses, for-profit or non profit. Historically it has been a school, a bank, a Boys and Girls Club and more. A community center? Actually, (and fortunately for this neighborhood), there’s already a community center just a few blocks north on N. Holton and E. Burleigh streets. My next idea was to put a music venue into the building. It would surely have the space and amenities to house a large venture like this, and it would be a fun addition to the neighborhood. However, it might be too much competition for Mad Planet. Additionally, neighbors would be bound to complain about the noise a large music hall would produce, especially considering that up until his point, Holton and Center has been a pretty quiet place.

So, I’m still stumped on how to fill this property. On the one hand, its various uses over the last several decades prove its versatility. True, the fact that none of these organizations is still housed here suggests it did not ultimately meet their needs, but the recent renaissance on E. Center St. might now make it a more attractive location (including the recently opened Maskani Place apartments west of N. Holton St.). Perhaps it has the potential to host a temporary activity—like a massive neighborhood garage sale or a winter farmer’s market— to test out its viability. Feel free to leave a comment if you have other ideas for how to fill this space, especially if you live in the neighborhood.

The other vacant storefront is a much easier sell. It looks flexible enough to fit a laundromat, restaurant, drug store or clothing store. Any of those businesses would lend some diversity to this corner. At the very least, it would be nice to see the hostile signs on this vacant property removed and some artwork placed in the windows in the interim period. Farther down the block, one can make out an old barber shop sign in front of a small building, and I’m sure this corner could benefit from a resurrection of that business too. Barbershops often turn into informal community gathering spaces, so that would be a wonderful addition.

As for aesthetics, it’s not exactly the right time of year for sprucing up outer facades or gardening, but come spring, that would be a welcome improvement for this corner. Fill the planters with bushes, flowers or even tomatoes. Give the storefronts a fresh coat of paint. Add some real benches for people waiting at the bus stop.

Holton and Center was undoubtedly once a grand space, flanked by a grand historic structure, but the time has come to adapt to its current circumstances. This will have to include new residents in the vacant buildings, and an overall aesthetic improvement of the outdoor spaces in order to accommodate walkers and bus riders. It’s too important a corner not to be improved. 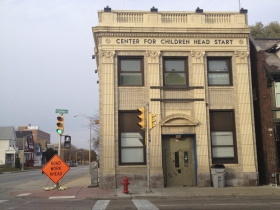 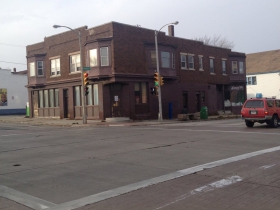 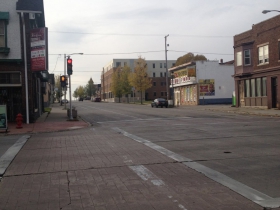 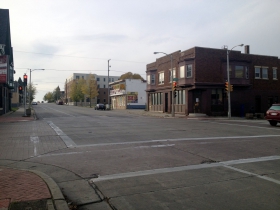 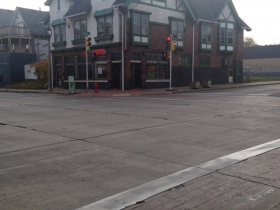 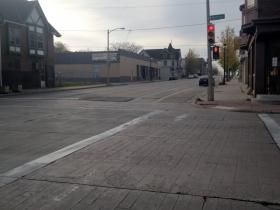