It’s a tad shabby now, but could become a wonderful entranceway to Walker’s Point 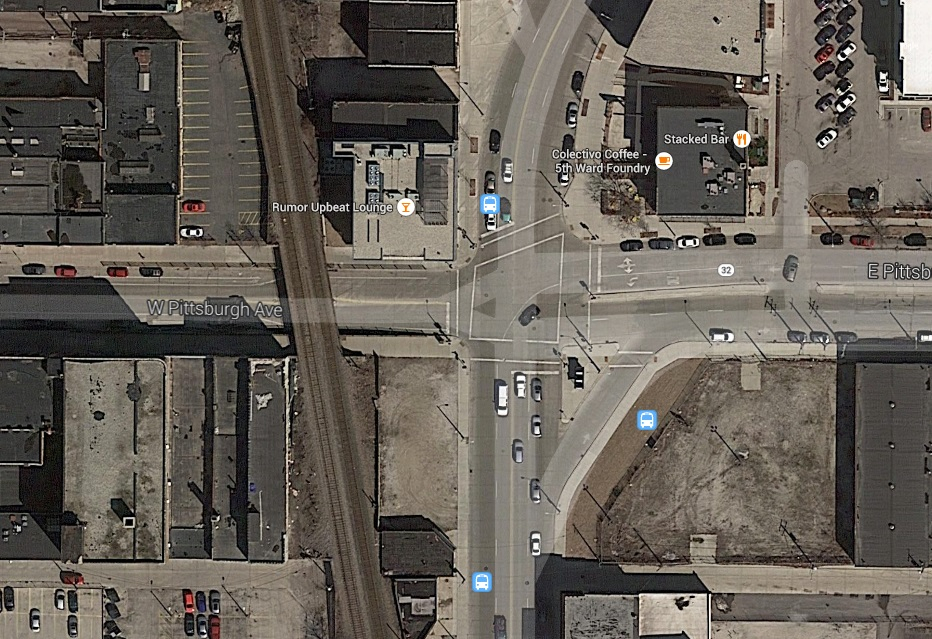 Walker’s Point has been getting considerable press over the last year—even from the New York Times, which gushed about places like Braise restaurant and Indulgence Chocolatiers in January. But the neighborhood will need more than just a handful of fine dining establishments to define it as a cohesive and distinct place.

The intersection of S. 1st St. and Pittsburgh Ave. is a classic example of this. On one corner, it has a trendy, successful Colectivo Coffee which has made its home inside an old foundry, capturing the industrial-chic feel that dominates the neighborhood. On another corner, there’s a mixed-use building with Rumor Lounge on the bottom floor and offices above. Compare this to the other two southern corners of this intersection: one is a fenced in, weed-filled, empty lot; the other seems to be a vacant auto body shop (for sale!). This is Walker’s Point to a T: Pockets of new growth and unique businesses coupled with empty buildings and crab-grassy, empty lots. 1st and Pittsburgh has so much promise, and could set the tone for refurbishment and beautification in the rest of the neighborhood.

The intersection’s key assets are without a doubt its character and its room for growth. First, the physical intersection itself is striking. Approached from the south, it’s the biggest, busiest intersection you’ll encounter for almost two miles, with a stoplight, a designated right turn channel, two major bus stops and a railroad line next door. Coming from the north, this intersection marks the end of stop-and-go, meandering downtown traffic. Although it poses a few issues for non-drivers, it feels significant, like the entrance to a new neighborhood. The architectural infrastructure of the intersection is also of note. The old warehouses that surround the corner are diverse in shape and color, offering a distinctive, historic style. One building just south of an empty lot is covered with a beautiful, bold mural. Naturally, with older buildings comes stability and dependable infrastructure that is ripe for new occupants and ideas.

This brings me to the next best thing about the intersection: The surrounding area has so much promise. You might not notice it at first, but the buildings on neighboring blocks are home to an array of small businesses, consulting firms and more. They prove that business and housing can mix seamlessly while maintaining the historic character of the neighborhood. The more businesses that grab onto this concept, the better.

Unfortunately, for most people, the intersection of 1st and Pittsburgh is treated like a pass-through zone, particularly during the evening rush hour. Everyone is rushing home from work downtown towards Bay View, St. Francis and beyond. The cars move so fast (this road is designed like a speedway and runs parallel to the highway, so people are basically using it as such), and there’s nothing to direct them off their course. What if we could convince them to stick around after work to do their grocery shopping or see a show, or at the very least, to respect this neighborhood as more than just an industrial park to speed through?

Another unfortunate aspect of the area is the abandoned buildings and vacant lots. While they do hold potential, for now they are a bit creepy, making people much less interested in hanging around the neighborhood. Less occupied buildings means less eyes on the ground. As one Yelp reviewer said of Rumor Lounge, “The surrounding neighborhood is desolate and kind of scary.” I suspect that moving new businesses into vacant buildings and lots takes some maneuvering around existing zoning codes which designate much of Walker’s Point for industrial use. Nonetheless, many new businesses around this intersection have proven it’s possible.

One final challenge for this intersection is its transportation infrastructure. Designated right turn channels make traffic flow quickly by diverting cars into different paths based on their destination. However, this intersection model almost always complicates travel for pedestrians and bikers because it’s not clear where they should be or when they are free to move. The current owner of the vacant lot has requested that the right-turn lane be removed, and I think he’s onto something [Editor’s note: Vacation of the turn lane has been added to the City Plan Commission agenda as of this morning]. Colectivo accomplished this feat when they moved in a couple years back, which enabled them to build a lovely outdoor patio.

How Can we Improve it?

1st and Pittsburgh is a key juncture. If we made it more attractive, welcoming and pedestrian-friendly, we could help spur the commercial growth of Walker’s Point. First, that vacant building should be filled. Colectivo is a savvy business and has done well here; if they decided the intersection was worth investing in, then other businesses will eventually follow. With that long-gone auto repair shop ripe for the taking, I bet nearby residents would appreciate a corner grocery store, or a casual eatery in its place.

Meanwhile, the vacant lot could be easily transformed into a park or dog park simply by removing the chain-link fence, planting a few flowers, sprucing up the grass and adding a bench or two. A playground might also be a useful addition to encourage more families to move into this neighborhood, and to help out the ones that are already here. The closest green space is Lake Shore State Park, not that close or easy to access from this spot.

A park on this corner would not only be a fantastic way to attract more pedestrians, but would also create a welcoming entry point to the neighborhood. Rather than the intersection being the last vestige of the boutique warehouse splendor that is the Third Ward, it could become the place that indicates you’ve entered the unique neighborhood of Walker’s Point. A “Welcome to Walker’s Point” sign could be displayed prominently on the lot, building on the branding of Walker’s Point that can be found on signposts around the neighborhood. That technique has certainly worked well for the Third Ward.

Additionally, with the spread-out nature of the restaurants and antique stores in Walker’s Point, a posted map would also do wonders to help encourage both locals and visitors to walk around the neighborhood more, rather than just driving in to La Meranda or Blue Jacket on a Friday night. Why not anchor that map here?

Finally, a little more pedestrian-friendliness would make this entrance to Walker’s Point a more inviting place. First, this spot would benefit from clearer and more pronounced space for bikers and pedestrians, as well as more obvious signage directing them where to go. Second, an extension of the sidewalk (possibly eliminating the right-turn channel) could create more safety for pedestrians.

Walker’s Point is one of the most interesting neighborhoods in Milwaukee; it just needs to do a better job of welcoming people through its streets. With a few simple steps to beautify the space and a new business to occupy the empty building, 1st and Pittsburgh could become the perfect entranceway to the neighborhood. 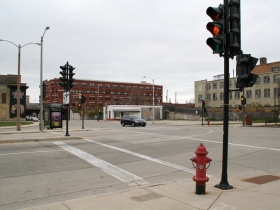 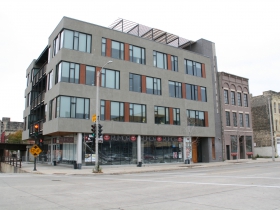 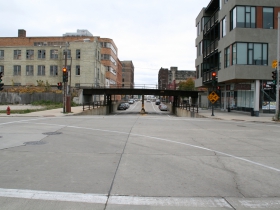 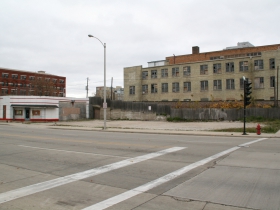 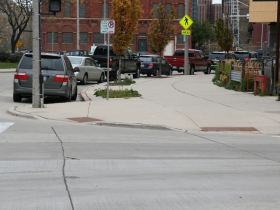 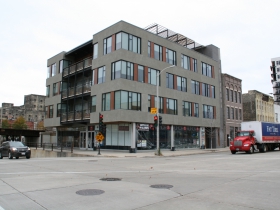