The Milwaukee Institute of Art and Design, Wisconsin’s only four-year college of visual art and design, unveiled their new residence hall for students, which will expand MIAD’s Third Ward presence. Described as “hybrid student apartments,” the six-story building will house up to 310 of MIAD’s 740 students. It’s been named Two50Two after its address on E. Menomonee St.

The ceremony, which doubled as a birthday party for the college, was emceed by MIAD President Neil Hoffman. Hoffman spent most of his time praising the work of others, be it the students, board members, faculty and staff, development team members or college partners. Referrring back to the college’s start in 1974, Hoffman praised the work of attendee Joe Mendla and six others who started the school with limited resources and few students.

MIAD Board Chair Madeleine Kelly Lubar spoke of the school’s role, noting that graduates design everything from Harley-Davidson motorcycles to products for Kohl’s, Master Lock and Briggs and Stratton. Lubar stated that while MIAD is a “little college,” it has a deep soul and a strong commitment to Milwaukee. To a round of applause, she noted that 80 percent of the college’s alumni stay in Wisconsin.

Mayor Tom Barrett presented Hoffman with a city proclamation declaring today “MIAD Day.” According to Barrett, one aspect of MIAD Day is that all students get A’s on whatever they’re working on, which drew laughs and applause from the students in attendance.

Barrett may have presented MIAD with a city proclamation, but he didn’t come with money. That role was left to Blick President Ed Ogorzaly, who presented Hoffman with an oversized check for $10,000. Blick will operate an art supply store on the first floor of the new building, which Ogorzaly called a vast improvement on their prior store in the area. 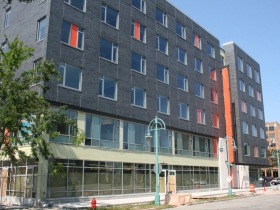 Alderman Robert Bauman, whose district includes the Historic Third Ward, praised MIAD’s work and commitment to the city. He noted that when he was first elected he knew little of MIAD. It’s hard to imagine Bauman’s eventual successor will have the same issue; the school is now much more visible in the neighborhood with three buildings on the V-shaped intersection of E. Erie and E. Menomonee streets.

General Capital Group partner Sig Strautmanis spoke at length of the many relationships required to get the building built. He noted the building was an outcome of a competitive bidding process held in 2009. General Capital Group won that bid, but originally had planned to build a residence hall and simply turn it over to the college. Instead, the company will own and manage the mixed-use building for MIAD. The building was designed by a team at Third Ward-based Engberg Anderson led by Mark Ernst, Tim Wolosz and Jamie Wanek. Northtrack Construction served as the general contractor on the project. Financing was provided by Park Bank and Associated Bank.

Sig also confirmed that a plaza would be filling the excessively wide Menomonee St. in front of the apartments. The plaza will contain a Bublr Bikes station and make it a lot easier for MIAD students to cross the street to the student union and campus center buildings. It will also make events like this a lot more pleasant; instead of standing in the middle of the street the audience will be standing in a plaza. 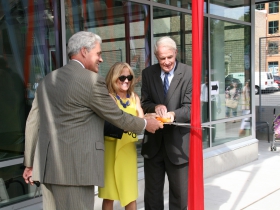 It’s been a busy week for building celebrations. Yesterday, Northwestern Mutual held a “ground breaking” on their new skyscraper, opting for a confetti explosion instead of silver shovels. True to their art school roots, MIAD had promised a ribbon cutting like no other. Instead of a ceremonial red ribbon cut with golden scissors, fabric was strung from the roof of the building to the ground. After a large pair of (college partner) Fiskars scissors were used by Barrett, Bauman, Hoffman and Lubar to cut the main ribbon, the rest of the audience was invited to grab scissors and cut their own piece from the ribbons. 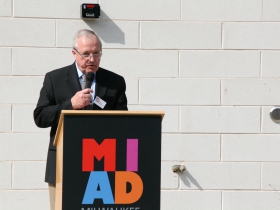 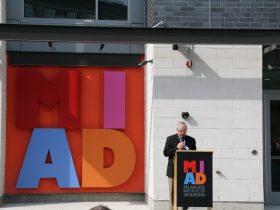 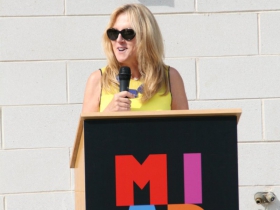 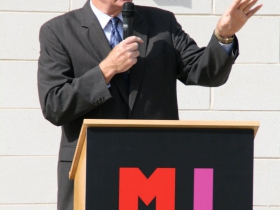 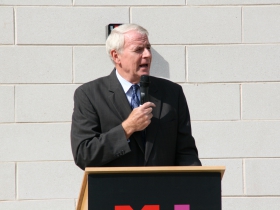 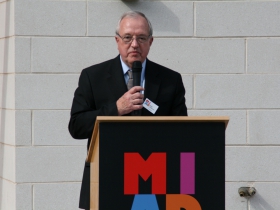