“It’s a beautiful day in Milwaukee,” Mayor Tom Barrett proclaimed as he took the stage to celebrate Northwestern Mutual‘s new office tower breaking ground. He had plenty of reasons to feel that way, be it the 1,110 jobs that will staying Downtown instead of going to Franklin or elsewhere, the 1,900 the insurance giant is expected to add Downtown by 2030, or the simple fact that this will be the biggest office building in the state.

This morning a ceremonial “groundbreaking” was held for the Northwestern Mutual Tower and Commons. Of course, ground has been broken for months with the East Building coming down and its multiple underground floors being removed. The 16-story East Building will be replaced by a new tower that will rise 32 floors and contain 1.1 million square feet of office space.  Alas, no ceremonial shovels were handed out.

It’s going to miss being the tallest building in Milwaukee and the state by a slim margin, but it will be the biggest. The new Northwestern Mutual Tower and Commons will exceed the neighboring US Bank Center in size by approximately 37,000 square-feet, but will be about 50 feet shorter (not accounting for the slight hill the new building will be on).

Much in the spirit of its longtime slogan, “the quiet company,” NML officials let others shine today. Mariachi Juvenil performed three songs on stage to get the event started, a group supported by the Northwestern Mutual Foundation. The group is part of Latino Arts Inc. and housed in the United Community Center (whose Ricardo Diaz was on stage, but did not speak). Also in the spotlight was Carmen Pitre and the Sojourner Family Peace Center. Pitre, Executive Director of the Center, effusively praised Northwestern Mutual and the support Sojourner receives from their foundation. Sojourner will be breaking ground on a new 72,000 square-foot facility on N. 6th St. and W. Walnut Ave. in three weeks.

Barrett spoke before Northwestern Mutual CEO John Schlifske, and seemed in quite the good mood, likely as a result of a long process that took four years and started with Barrett asking Northwestern Mutual’s lobbyists, “Is this a good news meeting or a bad news meeting?” The government relations specialists told Barrett that the East Building was coming down because of structural issues and that NML was exploring their options for a new building. Long-term it turned out to be a good meeting, but the situation required the negotiation of a $54 million, self-financed tax-incremental financing district (the TIF includes an additional $18 million for area infrastructure work for the city). Barrett concluded his remarks today with a quip that “you can show your support by buying more insurance today.”

Schlifske was brief with his remarks. He praised the work of all involved and talked repeatedly about the building being a place where Northwestern Mutual can meet the public. He noted that the issue of the deteriorating East Building landed on his lap almost the same day he took over as CEO from Ed Zore. Grasping the marquee location of the land on the east end of Wisconsin Ave., he noted the building would serve as a beautiful front door from Lake Michigan to the city. Schlifske also singled out the work NML is doing with job training and small businesses to build the building, noting that 25 percent of the cost and 40 percent of the hours will go to qualified firms and their employees.

The ceremony ended with the throwing of a switch by members of Mariachi Juvenil while Pitre, Schlifske, Barrett and Diaz looked on. Confetti was shot up into the air as the switch was thrown and two excavators tossed piles of dirt.

Like the stones that built the 1914 adjacent corporate headquarters, the glass and steel won’t be assembled in a day. The new tower is expected to take until 2017 to be completed.

Elsewhere in the Neighborhood

The NML skyscraper isn’t the only building under construction in the area. Two blocks south at 833 E. Michigan St., Irgens is constructing a 18-story office tower anchored by the Godfrey & Kahn law firm.

Not far from there The Couture, a residential high-rise, was expected  to replace the Downtown Transit Center (which as I’ve written doesn’t live up to the name), but its status is unclear at this point. No construction timetable has been released and, despite claims from developer Rick Barrett that he can get title insurance on the controversial site, multiple sources have told me they see the project as extremely unlikely because of financing challenges. Of course, insiders said the same thing about Barrett’s The Moderne residential high-rise. It took a couple years of work and a battle with the recession, but Barrett managed to get that project completed.

Politics to be Played

The absence of County Board members was notable because Northwestern Mutual is negotiating to buy the O’Donnell Park Parking Garage across the street. The sale requires approval by the board.

Not the Only NML Construction Project

The office tower isn’t the only Northwestern Mutual construction project in the area. The company tore down the two-story, brutalist-style building at 795 N. Van Buren St. recently. It was originally built as a data center for Arthur Anderson, and had no exterior windows. Framing for the pouring of asphalt is in place now as the company is turning the empty lot into surface parking. 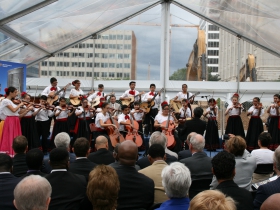 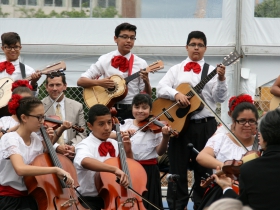 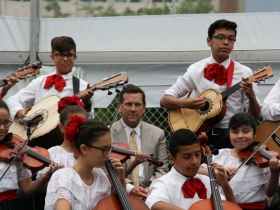 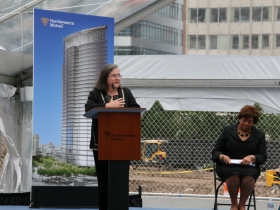 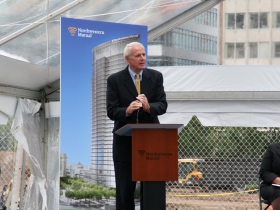 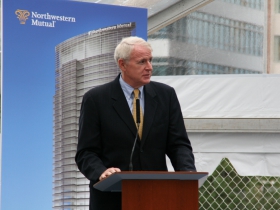