Better Connecting the Lakefront to Downtown

There is no question that the connection between Milwaukee’s lakefront and downtown is underwhelming. Despite the fact that they meet at Lincoln Memorial Drive, there is no grand connection between the two, which is unfortunate as the intersection of Lincoln Memorial Drive and Michigan Street is a gateway to the city. The O’Donnell Park Garage and Downtown Transit Center aren’t exactly warm companions to the complementary beauty of the Milwaukee Art Museum and Pier Wisconsin (Discovery World). Further challenging the setup are the elevation differences, with the current configuration exacerbating the differences in elevation between downtown and the much lower lakefront. The end product of the downtown-lakefront connection at Lincoln Memorial Drive and Michigan Street is a hodge-podge of awkward pedestrian pathways, unattractive views, blocked sight lines, and under-utilized land. Thankfully, thanks in part to an idea by Michael Cudahy, a Long-Range Lakefront Planning Committee has been formed to designed a better connection between downtown and the lakefront, and a better gateway to the city, and is currently drafting their recommendations.

For visitors by automobile from the highway, if one is to come from the south over the Hoan Bridge or east off of Interstate 794, their arrival at the lakefront is greeted by the blank walls of the Downtown Transit Center and ill-configured O’Donnell Park Garage to the left, and the beautiful, complementary Milwaukee Art Museum and Pier Wisconsin (Discovery World) to the right. The dedicated right turn lanes at Michigan Street and Lincoln Memorial make it easy to avoid ever slowing down when no one is around, but during festival season, the dedicated right turn lanes become jay-walker territory, resulting in lots of honking horns and pedestrians playing real life Frogger. While the Calatrava addition to the museum might be enough to distract someone for a moment, this pathway to the city doesn’t create the grandest of entrances.

For visitors by foot, bicycle coming from downtown, accessing the lakefront leaves a lot to be desired. Sure, the Milwaukee Art Museum pedestrian bridge is beautiful, but it largely serves only one building and requires walking through under-utilized O’Donnell Park. Walking to the Henry Maier Festival Grounds is unpleasant to say the least, coming from Wisconsin Avenue one goes through a frequently empty O’Donnell Park, down a stairway that is hidden from the other end of the park, and then must attempt to cross Lincoln Memorial Drive at its intersection with Michigan Street where dedicated right turn lanes make the intersection far wider than a normal intersection. Along the way pedestrians are greeted with great views of the blank walls of the unfortunately-named Downtown Transit Center (more on that later) and awkwardly configured green space (such as the space between O’Donnell Park and Michigan Street).

Automobiles coming from downtown are confronted with the blank wells of Michigan Street, which leaves a feeling like you’re exiting through the back door of the city that no one is supposed to see. Once they’re able to cross Lincoln Memorial, the lakefront looks mighty attractive, but getting across can be a challenge with the dedicated right turn lanes encouraging vehicles to speed up, but frequent pedestrian crossings causing vehicles to slam on their breaks and slow back down in a hurry. An extra-important consideration with the lakefront is that almost every automobile trip results in a pedestrian trip. When one parks at O’Donnell Park garage, they still must cross Lincoln Memorial Drive and encounter many of the same challenges that pedestrian-only trips face.

Thankfully, there is a low-cost solution in the form of back-to-the-basics urbanism. 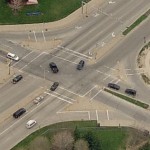 The intersection of Michigan Street and Lincoln Memorial Drive

The easiest thing to reconfigure, and the element that will guide future changes, is the intersection of Michigan Street and Lincoln Memorial Drive. How easy is it to fix? Very. Eliminate the dedicated right turn lanes. Eliminating the dedicated right turn lanes dramatically reduces the width of the intersection, making it easier and safer to cross on foot or bike. Eliminating the dedicated right turn lanes also delivers a better signal to drivers at what speed they should approach it, and allows police officers to more easily direct traffic during high-volume periods such as Summerfest. Eliminating the turn lanes also would have nearly no impact on everyday driving patterns as the same number of lanes would exist to go straight through the intersection. It’s a cheap, easy, actionable item that could be executed tomorrow and would be a great first step to building a better connection between downtown and the lakefront.

There is absolutely no need for tunnels, either pedestrian or automobile, as the recently formed Long-Range Lakefront Planning Committee is considering. Automobile tunnels, similar to the Kilbourn Tunnels found underneath the Milwaukee County Courthouse, are expensive to both build and maintain. Not to mention that at same point they are doomed to crumble, which will turn an otherwise attractive area into something people will want to potentially stay away from. In addition to the tunnel itself under Michigan Street, there would certainly be a requirement of ramps in and out to Michigan, this would reduce the amount of available land for redevelopment, imposing an opportunity cost, not to mention still possibly creating an awkward pedestrian experience with ramps appearing seemingly out of nowhere. A pedestrian tunnel under Lincoln Memorial Drive is likewise a bad idea not only from the cost perspective, but because of safety concerns as well the general appearance. There simply isn’t enough foot traffic in the area on a consistent basis to justify a tunnel. The committee would be wise to stick to a back-to-the-basics four-way intersection that will have a timeless appearance, and cost next to nothing. 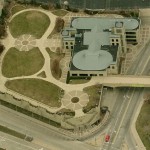 The Downtown Transit Center is unfortunate for a number of reasons. Coming up with a better name for it might better explain to a lay person why. I propose to think of it as the Downtown MCTS Storage and Staging Facility. The building is located on the edge of downtown far from the center, which reduces its utility to potential riders (I’m an extremely frequent rider and have never even thought about boarding a bus at the facility). As a “transit center”, the building only serves MCTS and a handful of buses from other public bus operators, no Amtrak, Greyhound, Badger Bus, Megabus, Coach USA, etc, etc. It is neither in the center of downtown geographically, nor is it the center node for all of the transit systems. It does do one thing quite well, and that is to serve as a staging facility for MCTS buses. A staging and storage facility is certainly a necessity for the system, but given a blank slate you wouldn’t place such a facility on some of the most valuable land in the state. Given the use of the facility it’s no surprise that the building is covered in blank walls, which are logical for a bus barn, but subversive from the perspective of building an attractive gateway to the city.

After finding a new home for the MCTS operations, the site could be redeveloped through the issuance of a request-for-proposals (RFP) that would result in a building that is built to the curb, has street-level retail or other public uses, serves to make downtown more attractive as seen from the lakefront, and encourages more pedestrian activity in the area. Not to mention any new building would pay property taxes, which go in-part to sustain the operations of all the public amenities in the area. 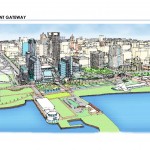 The Long-Range Lakefront Planning Committee should be cautious with placing requirements on potential developers. As discussed in the last committee meeting, the RFP would require that an equal amount of public green space be maintained at the facility. This would be a wise requirement if the existing green space was actively used or there was a shortage in the area, but most people aren’t even aware of the green space at the facility (or even that the Downtown Transit Center exists). The green space that exists at the transit center is on the second-story and essentially operates as a green-roof for the building. Requiring that much public space be maintained in the form of green space would significantly hamper the redevelopment of the site, such that it might kill any redevelopment all together. At the very least it would impose an opportunity cost in the amount of property tax revenue that could be generated. If the Park East has taught us anything development-wise, it’s that lobbing requirements onto developable land only slows progress and results in poor projects.

The O’Donnell Park Garage has a number of different options available for its reconfiguration, but many are highly dependent on what happens elsewhere in the area. Given that, I won’t dwell on too many possible scenarios for the parking garage. A few things are certain.

Given those four facts, the notion of tearing down the garage and park and replacing it with a 20+ story building is laughable and possibly not even desirable. There are, however, other realistic options.

The garage and park are lacking in two primary areas. 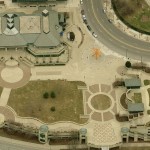 There are two likely options to improve upon that, assuming the previously recommended options regarding the intersection and MCTS facility were undertaken. First, the very southern portion of the garage can be reconfigured/lowered to better expose the park and building that hosts the Betty Brinn Museum, Coast restaurant, and Miller Pavilion to lakefront visitors. This would encourage more traffic up to the building and park, and overall make downtown appear more appealing to those on the lakeront. Second, on the empty, unused green space just past the southern end of the garage, a new building could be developed that serves as a bookend to Michigan Street and downtown with the redeveloped MCTS facility. This will create a better defined end to downtown, encourage more pedestrian circulation between lakefront and city, frame O’Donnell Park better, making it a better public space,  and make the city appear far more attractive from the lakefront forming a better gateway. The new building could also house a publicly-accessible, indoor staircase and elevator from the park down to the lakefront.

The recently formed Long-Range Lakefront Planning Committee, chaired by Parks Director Sue Black, is on the right track. As a word of caution, the devil, as always, is in the details. They should look to the 2010 approved City of Milwaukee Downtown Plan for guidance, as this very area was one of main catalytic projects. The committee would be wise to follow common sense, back-t0-the-basics urban solutions in their quest to build a better gateway to the city and a better connection between the lakefront and downtown. Simple, urban designs will be timeless and cost-effective, compared to tunnels and bridges that will age and require millions to build and maintain. Likewise, RFPs for development with few requirements will generate the greatest buildings and greatest amount of tax revenue to sustain the operations of Milwaukee’s cultural campus.

4 thoughts on “Better Connecting the Lakefront to Downtown”