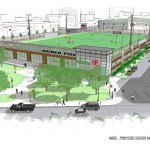 Talks between M&I, MSOE, and Milwaukee County regarding MSOE’s proposed parking garage in the Park East have dragged on for months, and it is likely because of a new detail that makes a marginal project into a bad project.  Apparently, the deal would be contingent on an additional parking lot for M&I to replace the lot they would sell to MSOE.  This surface parking lot, which would be located across the street from another M&I parking lot along Water St., would essentially lock up a vast section of the Park East land to never see significant development.

This project was marginal from the beginning as it had an assortment of drawbacks.  For example, it is sited incorrectly in that the park would not have allowed it to enhanced future developments.   Another issue was that the 700 car parking garage was not large enough to help other developments offset their parking ‘needs’.  The design shows little inspiration, in that it failed to wrap much of the building with active uses, and failed to capitalize on an opportunity to create a point of focus where the building comes to ground.  Further, the soccer field wasn’t the public park intended by the Park East plan, and it is a real question as to whether this will become a public amenity or a MSOE-only facility.  And now M&I is pushing for control of the land along Water St. to potentially create a new surface parking lot.

Hopefully this part of the deal can be resolved, because in this form this deal has more of a chance of stopping any development, rather than encouraging any development as it will turn much of the Park East land into a single-use, low-utilization, low tax-base sea of parking.

One improvement that is being negotiated is for M&I, at least in the short run, to lease their parking slots inside the new garage.  This would be a significant improvement, though apparently M&I is still pushing for long-term control of the lot along Water St., so this may not be a good long-term solution.  As Alderman Nik Kovac explained to me “if the lot west of there eventually becomes a surface lot it is a failure,” but that he hoped a long-term solution could be worked out to resolve the issues.  Better yet, MSOE could build a larger garage that would not only meet the long-term needs of M&I, but also the needs of future developments in the Park East.  A larger garage could be accomplished with some sort of City of Milwaukee involvement and could include an upgraded first-floor design to insure tax revenue and street activation.

Although the project is still questionable as to its long-term benefits to Milwaukee, the deal breaker is if parking garage comes with a surface parking lot, as that would be a failure.