Centered around the recently controversial Nomad World Pub, soccer fans took to the streets Sunday afternoon for the USA vs Portugal World Cup game. The game was scheduled to start at 5 p.m., but the area off N. Warren Ave. that was closed was filling up by 3 p.m. By the start of the game, E. Brady St. had to be unexpectedly closed from N. Arlington Pl. to N. Farwell Ave. Not long before half time, a crowd was forming on the roof of Jimmy John’s and a van parked on Brady. If anyone doubted the appetite for soccer in Milwaukee, Sunday was yet another demonstration that Milwaukeeans are open to embracing the beautiful game, and they’re really eager if they get to drink beer in the streets and chant “USA, USA”.

Mike Eitel‘s Nomad World Pub was the official host of the street closure, having a portable screen installed approximately four doors south of Brady on Warren and a temporary bar in the middle of Warren. Eitel was far from the only beneficiary though, as fans packed the adjacent Club Brady as well as Malone’s, Jack’s American Pub, Jo Cats, Hi Hat, World of Beer, and more.

I had mentioned that Brady St. should have been closed in a Facebook post around 3:30, snapping a photo from the north side of the street as the crowd was bleeding out a hour and a half before the game’s start. The crowd itself forced the issue around kick-off, even as Eitel was out asking the crowd to stay off Brady. It’s unclear what the city will bill the Nomad for this and I wouldn’t expect an ugly situation, as the neighborhood’s alderman Nik Kovac was one of thousands in attendance. An estimate has been offered up of 15,000 in attendance, that seems high to me, but it was a huge crowd. And that 15,000 figure doesn’t include other soccer-centric taverns in the city like The Highbury or Upper 90 either, both of which were reportedly full for the game.

The party on Brady was a sight to see, but it’s unfortunate Eitel didn’t follow through on his plans to build soccer city in the Park East. The gigantic Park East parcel he had reserved west of the river could certainly have hosted countless more people. On the flip side, Eitel is probably beloved by his fellow Brady St. bar owners for the piles of cash he made them yesterday.

While the game ended in a draw thanks to a last second goal by Portugal (as one friend remarked, “that just saved the Lower East Side [from a riot]”),  fans were ready to party with every USA goal. My fiance described those moments as “beer rain” — when beers went flying into the air as high fives were exchanged and chants of “USA, USA!” and “I believe that we will win!” were repeated over and over, as utter joy transfixed the fans.

The thousands in attendance illustrate the fun that can be had on Milwaukee’s urban streets. The city should seek to cultivate these events, not shun them. Early season Packer games, post-season Bucks games (draft party on Thursday), Olympic gold medal games. It’s yet another way the city has an edge over the suburbs, people aren’t going to stand on W. Bluemound Rd. to watch a soccer game, no matter how many lanes they widen it to.

Our photos capture the event, but you’ll really want to experience it in person for the full effect. The Nomad has a scheduled street closure (including Brady) for the final game of the World Cup on July 13th. 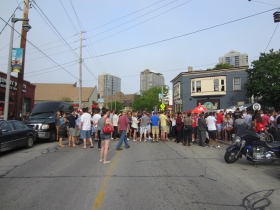 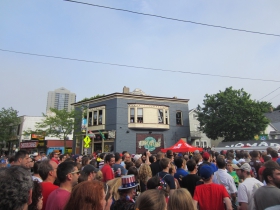 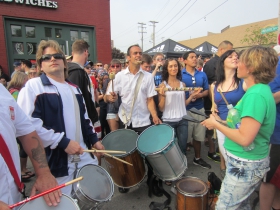 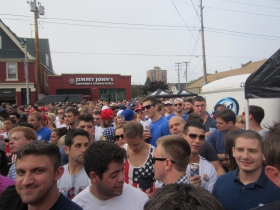 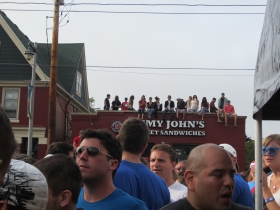 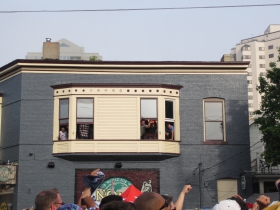