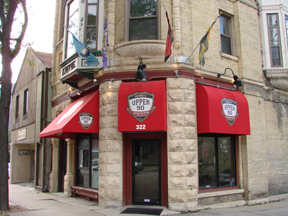 Growing up in Waukesha County, Seth Dehne and Jake Dehne were avid soccer players. Their vision and creation, the Upper 90 Sports Pub (322 W. State Street), is a homage to those soccer years and a place to celebrate all sports, especially Milwaukee teams.

The bar’s name comes from a soccer term: “upper 90” is when a soccer player scores in the top part of the goal where the metal bar makes a 90 degree angle. It is one of the hardest goals to make, Jake notes. Still, this is not a soccer bar, he emphasizes, but “a sports bar that supports soccer.”

As for the partnership, with his brother, Jake says, “we always wanted to do something together but never had the means to do it.”

Those two business ventures helped him to get a loan to open Upper 90. Prior to leasing the space in October 2011, both brothers sat down with the previous owner of the location, Gino Fazzari of the former Calderone Pub, and talked about possibilities. 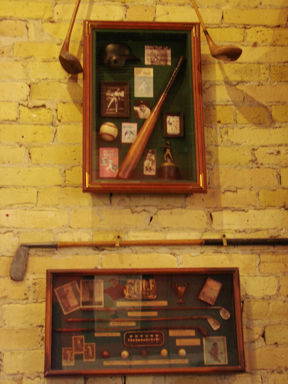 They then came up with a business plan and began renovating the space. The idea was to create a vintage, gastro sports pub. Along with Dan Moore, now general manager of their pub, and a few family friends and employees from the other bars, the Dehnes performed a rather quick facelift on the building.

They invested time and money into changing the kitchen equipment to suit the needs of their chef, Michael Conley,  installing a fancy dishwasher and walk-in cooler, along with repainting walls, replacing all the old televisions and basically, bringing the building back up to code before opening in November.

What Chef Conley brings to the table was a very big part of the initial vision. With Jake more on the marketing side of things and Seth the operations man, they needed someone to provide great food but in a sports bar atmosphere.

The idea of the gastropub originated in the United Kingdom and means to serve better quality food inside a pub atmosphere. The Dehnes idea was to create “Milwaukee’s First Gastro Sports Pub.” As Jack puts it, “We wanted to do something unexpected, something people would talk about.”

The menu currently features alligator, shrimp, calamari, hummus, New York Strip steak and more. Some of the top sellers are the Alligator Bites, and The Taz (a burger stuffed with sharp cheddar and Nueske’s bacon), and of course, Milwaukee’s Biggest Pretzel, weighing in at roughly a pound in a half, “the size of a car’s hub cap,” says Jake.

“Here you can watch a Packer game with your wife and she’s not going to be like, ‘I got to eat before we go.’”

Conley previously served as executive chef at Tuckaway Country Club from 2009-11 and head chef at The Knick from 2001-09. He went to culinary school in New York at the French Culinary Institute, now called The International Culinary Center, for 6 months in 1999. 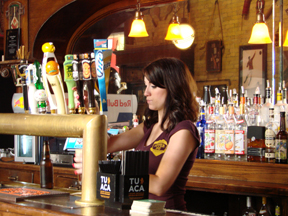 Conley thoroughly researched his menu ideas by making sure they weren’t too similar to anyone else’s in town. “I came up with 50 to 60 different ideas and we got together to try them out,” he says.

He plans to add a menu insert later this month with many new options and test them with customers. Then in the next couple of months, he will add 6 to 8 of the insert’s most popular items to the menu.

Since the kitchen is rather small and cannot store a ton of food, Conley plans on constructing dishes that use some of the same interesting ingredients.

He’s thinking of making a combination meatloaf of pork and beef with Nueske’s bacon with perhaps mushroom gravy. “We’re trying to stick to homey, Wisconsin style cuisine but with a flare,” says Conley. He may also add a sea trout depending on its year round availability and is thinking of a beer battered hotdog with a green olive and jalapeno salsa for a little fancier bar food.

Upper 90‘s atmosphere benefits from its history: It was originally an 1889 Schlitz Bar and has been a tavern ever since.  Reinforcing the sports theme are vintage soccer posters hung throughout the bar, old ice skates, baseball gloves, tennis rackets, team flags and more. 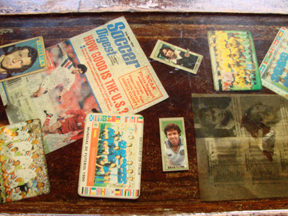 There are four tables made by the Dehnes and friends that are contrived out of old doors with glass tops. There is a baseball table, a tribute to the Brewers, a Milwaukee Bucks table, a Green Bay Packers one and a soccer table, which is a commemorative piece for the brothers. It has pictures of them playing, their patches and more.

Each can fold out into a bigger table allotting more room for parties. And since the bar sponsors local teams and has an official relationship with Marquette University, it definitely gets some use out of the expanded tables.

Financial adviser and local patron, Kirk Thode, often holds his business functions at the Upper 90 and likes the comfortable size of the bar.  He has known the brothers for years and keeps returning because the staff is pleasant and the food good.

“It’s not your typical loud, chug light beer and scream at the TV scene,” says Thode. “You can hold a conversation, grab good food and catch whatever you are there to watch from anywhere in the bar.” It’s not a place “with college kids doing bombs and yelling at the top of their lungs,” he continues.

But was that intentional? Not necessarily. As Jake notes, the location is advantageous for the sports season but disadvantageous because there are no residents around.  “You become a destination sports bar,” he says.

And that’s a longer term proposition, he adds: “With clubs you want to be jammed from the beginning. The clubs are a sprint but something like this is a marathon.” 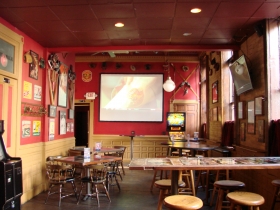 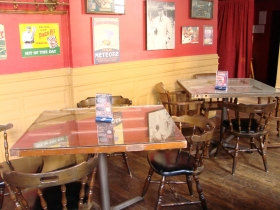 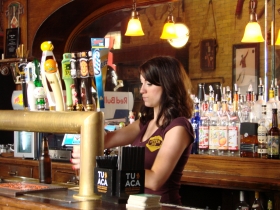 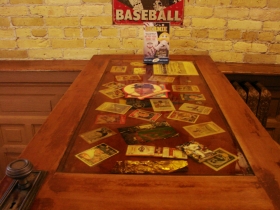 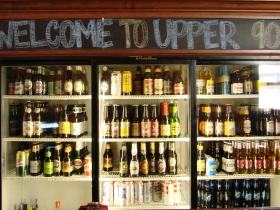 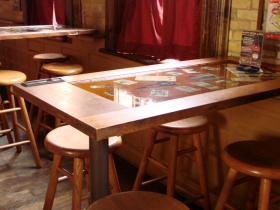