A rather delicious story: how an ice cream business was started by a young, green couple. 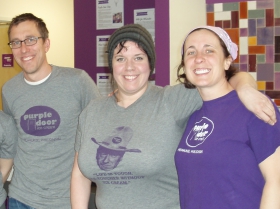 Steve (left) and Lauren Schultz (far right) have a great working relationship with their staff members. Photo by Peggy Schulz.

One month after the April 1st opening of their first retail location at 205 S. 2nd St., Purple Door Ice Cream’s owners, Lauren and Steve Schultz, are still getting used to the fact they’ve reached this pinnacle so quickly.  Purple Door began in 2011 solely as a wholesale purveyor of ice cream, in a small, rented space on Pennsylvania Ave. in Cudahy.

From there, the fledgling company moved to space shared with Clock Shadow Creamery, at 138 W. Bruce St., just a few blocks south of Purple Door’s new location. The shared Clock Shadow space included a small retail presence, but wasn’t enough to meet the Schultzs’ expectations for the business or themselves.

They’ve been pleasantly surprised by the volume of business they’ve already experienced, “even with this cold, wet April,” Lauren says “This is a pinnacle point for us,” Steve Schultz says. “From the beginning, it’s where we’ve wanted to be.”

When Lauren was growing up in Chicago, she dreamed of one day having her own ice cream business.  She recalls going with her family to the Original Rainbow Cone ice cream shop, one of Chicago’s oldest such shops. “Everyone was happy when we got ice cream.”

Lauren is responsible for the name Purple Door. “Purple was my favorite color as a kid,” she says.  “It’s about spirit and energy and opening the door to something good.”

“You can develop a product that’s inexpensive to make,” Steve says, “but it tastes like it!” All of the flavors in Purple Door ice cream (save for Oreo®) are all-natural, with no food coloring.  The stabilizers and emulsifiers are all-natural.  The spoons and cups are compostable.

No business can be successful without employees who are sympathetic to their employers’ goals. “We’ve got an amazing staff,” Lauren says.  “We tend to find people who sought us out,” Steve says, “because they appreciate what we’re doing and how we’re doing it.  They wanted to get out of the big corporate thing.” 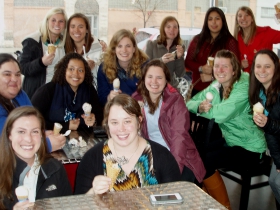 “When we started, it was with ideals and values based on what was important to us,” Steve says.  “It was our way or no way.”  And their way meant the business should have a social component, supporting the community in which they’re located.

Some of the ingredients used for the ever-evolving flavor menu are bought from local suppliers, including Anodyne Coffee Company, Great Lakes Distillery and their former hosts, Clock Shadow Creamery.

Lauren says the Walker’s Point location is a great fit for Purple Door, both from the perspective of their suppliers, as well as the nearby restaurants that Purple Door helps supply. 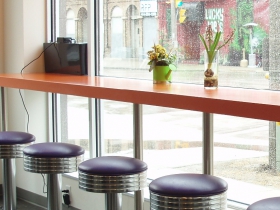 Rotating stools offer a perch from which to view the surrounding Walker’s Point neighborhood. Photo by Peggy Schulz.

The location, at the southwest corner of S. 2nd St. and the former Pittsburgh St., now called Freshwater Way, in recognition of the Global Water Center at the west end of the block, is in a relatively booming area.  On the north side of Freshwater Way, plans are in the works for redevelopment of the Courteen Seed Building.

Even though the retail store is only one month old, new features already are being added, including an ice cream “flight,” much like a beer or wine flight, where four two-ounce scoops of ice cream will be served on one specially-made wooden plank, so small groups can share a variety of flavors.  A yet-to-be announced flavor will be coming out in celebration of Cinco de Mayo.  Also coming soon are ice cream pops, and the “Door Galore Sundae”: a waffle cone dipped in chocolate, filled with your choice of ice cream, and whipped cream, chocolate sauce and a special piece of chocolate topping it off.  Can’t wait for that one. 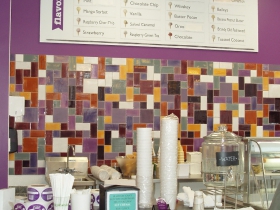 Colorful tile and part of the Purple Door spoon collection add to the atmosphere inside the shop. Photo by Peggy Schulz.

The Schultzes are grateful for the financial help they’ve gotten to help grow their business. “When we first started, we had no capital at all,” Lauren says.  The couple prepared a business plan through the Wisconsin Women’s Business Initiative Corporation.  “We got a small start-up loan and things took off from there,” she says. Most recently, Purple Door has benefited from Fund Milwaukee, “a great crowd-funding resource,” Lauren says.  “They would rather invest in something soulfully.”

With two young children, ages 2 and 4, Lauren and Steve also take into account their family’s needs. “It’s important, that business/family balance,” Lauren says.  “We want consistency, so we’re home evenings and weekends, and even some times during the weekdays.”

All told, everything seems to be working rather deliciously for the company, and for their many ice-cream loving customers in town.