Architect's renderings show the 1913 Walker's Point building will be dramatically transformed. But not all are sold on design. 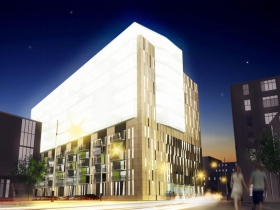 The Avantti Design Group, which is the designer and developer that will transform the former Courteen Seed Building, the seven-story industrial building in Walker’s Point, has developed renderings to illustrate that plan. They show a radical transformation of the building, whose address these days is at 222 W. Freshwater Way, directly across the street from the Global Water Center.

The plan calls for a 60,000 square foot, two-story addition to the top of the 7-story, 204,323 square foot triangular building, constructed in 1913. It is to have apartments, condominium units and first-floor retail. (The renderings were created by Basecamp Design Studio).

The renderings show a colorful, fractured facade for the building, with a blank wall suspended above the building’s mass at the west and south facades. Vertical slits in some walls, apparently windows, mimic the 1960s metal decoration of the Rockwell International plant down the street. Seen from the east, it looks a bit like the old Milwaukee Journal printing plant. Both of those buildings had existed 50 years before becoming a design inspiration, yet here we are.

The studio says it plans to get underway with “full design development” by May, with construction expected to be completed in 2016. 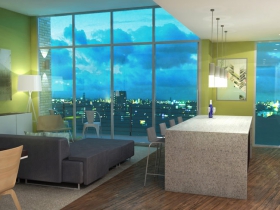 The plan falls short for Michael Gerlach, [Facebook link] a class of 2011 graduate of Wisconsin Lutheran High School who had befriended the late Herb Thatcher, who bought the building in 1966. Although Thatcher announced a $20 million plan to add 6 stories to the structure in 2006, nothing came of it at the time of his death at 83 in March 2013. At that time Thatcher’s heirs trusted Gerlach with the enormous task of selling the building’s contents, including an airplane.

Gerlach is a musician, the lead designer at Urban Outfitters, and in addition is the owner of a new Riverwest woodworking shop. He is steeped in the city’s history, and wonders if the plans for the Courteen building could be better.

“It’s important to note that these renderings are still in the design phase but seeing where they seem to be headed worries me. Let’s not sit back and let others determine how our city looks. Let’s make a difference,” he wrote.

“I want to get a discussion going here with thoughts about the design that I can bring to the developer. I am fortunate enough in this situation in already having a good relationship with the people making the decisions for the future of Courteen Seed. Feel free to invite others to this group that you feel will help. …

“I’m starting this group because so often in Milwaukee buildings are put together so quickly without the input of the people actually living in the city. We’ve seen time and time again historic buildings torn down or completely stripped of what they once were. I feel the architects heading these projects often forget the importance of preserving what once was and focus more on the present. The majority of buildings I see built in our city are built quick with a design that soon will be outdated.” 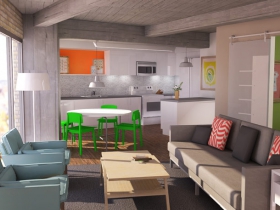 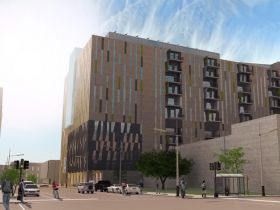 12 thoughts on “Plenty of Horne: Regrowing the Courteen Seed Building”