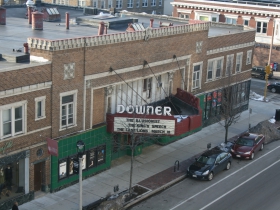 There’s nothing quite like the Downer Avenue retail strip on Milwaukee’s East Side. “Can you name me another two-block stretch in the city that has a bank, a grocery store, four restaurants, a movie theater, a hardware store, liquor store, bakery, barber shop, book store, wine store, coffee house and doctors offices?” asks Ald Nik Kovac, ticking off a list that still leaves out some of the other retail shops.

Kovac’s East Side district includes the strip, and he grew up just off Downer and knows first hand the strengths of this retail area, which serves the wealthiest neighborhood in the city.

And yet developer Joel Lee, who owns somewhere between half and three-fourths of property on this strip, says he needs the city to create $2.5 million Tax Incremental Financing (TIF) district to subsidize new development, as the Milwaukee Journal Sentinel has reported.

Lee, president of Van Buren Management Inc., wants this $2.5 million TIF to subsidize his $30 million development plan, which will include an 80-room, seven-story hotel; a five-story, 32-unit apartment building at the southeast corner of Downer Ave. and Park Place; an 11-story, 97-unit apartment building at the northeast corner of Stowell Ave. and Webster Place; and renovations to the Downer Theatre and other commercial buildings.

As this list suggests, Lee thinks the area can support a stunningly ambitious development plan, which makes it hard for him to hold out a tin cup to the city. Downer Avenue is one of the most vibrant areas in town. If it needs a TIF, then pretty much every retail area in the city would as well.

The fact that Lee would even make this demand shows just how common it’s become for businesses to demand hand-outs from government, and how routinely the state law allowing TIF districts is abused. TIFs are supposed to be for development in blighted areas, brown fields and the like, in areas where development would not occur without such a subsidy. Taxes collected in that district help fund the development and are eventually repaid from taxes spinning off from the future development. Former Mayor John Norquist, who served in the legislature when the law was passed, once told me that legislators saw the TIF tool as “a way to hot wire the inner city.”

Norquist struggled with this issue, using TIFs when he had to, but trying to avoid it. Mayor Tom Barrett, statistics suggest, was more generous. In Norquist’s last two years in office, 2002 and 2003, the city spent a combined $96 million on TIF subsidies. That increased to $159 million in 2005 and 2006 under Barrett, at a time when development was booming and you wouldn’t think so much subsidy money would be needed.

Once the economic meltdown occurred, it was hard to blame Barrett from dangling everything short of his first-born child to get some development. Moreover, the city must compete with surrounding suburbs, who are generally very generous with TIF dollars.

“Look at Shorewood and Whitefish Bay and the money they are spending on TIFs,” notes a source who is familiar with and supports Lee’s plan. “Just eight percent of the plan would be financed with the TIF,” he adds. “Some suburban projects go as high as 12 percent or even 15 percent.” Yep, it’s a slippery slope; once you start handing out subsidies the blackmailing and bailouts get ever more extravagant.

There was a time when Lee’s pitch might have been more persuasive. Old timers may remember the long-dark building that once housed the old Coffee Trader and seemed to stay empty for decades. For many years you couldn’t find a decent restaurant on the street; now there are four of them, including two different pizza places.

But Kovac, who knows the street’s history well, suggests any of the problems on Downer Avenue were due to developer Daniel (Danny) Katz, who bought up much of the property in the area and jacked up the rental rates. “Katz would hold out forever for a high price from retail tenants,” Kovac recalls. “It made no difference to him economically if the places stayed empty but it made a huge difference to other retail businesses on the street.” (Katz became so infamous that Milwaukee Magazine devoted an entire feature story, written by Jim Romenesko, to Katz and his negative impact on the city.)

Katz eventually sold out, with much of it going to Boris Gokhman, who later sold much of it to Lee. For years, Kovac contends, Lee followed a similar approach, waiting for high rents even if it resulted in empty buildings.

But in recent years that has changed, Kovac says: “I think he has done some good things for Downer Avenue and I want to see them continue to succeed.”

Kovac says that along with Barrett and Department of City Development Commissioner Rocky Marcoux, “we all agree that we want to do what we can to help.” But all three also oppose a TIF district. 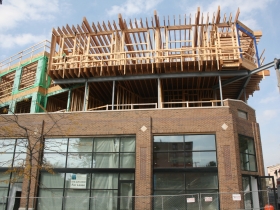 The construction of Prospect Mall Apartments. Photo by Jeramey Jannene.

Kovac notes that Ryan Schultz and Brett Haney of HSI Properties “didn’t want a TIF but were concerned if anyone else in the area was going to get one,” because it might leave them at a competitive disadvantage. If Lee gets one on Downer Avenue, why would anyone in town do a development without a TIF?

Ironically, Lee is being represented by lobbyist Mike D’Amato, who preceded Kovac as alderman for this district. D’Amato never supported a TIF for Downer Avenue or any development on the upper East Side. Now he thinks it’s a fine idea.

The reality is that Lee doesn’t actually need a TIF district for most of the development, including the hotel, as my source notes. Rather Lee wants it strictly for the renovation of the Downer Theater and a pediatric center with doctor’s offices.

Doctors’ offices now need a TIF? It’s hard to imagine any loss for Downer Avenue if that development occurs elsewhere. Which leaves just the theater. “I think if we lose the movie theater, that would be a death knell on Downer,” Lee told the Journal Sentinel.

Nonsense. The street’s location and vibrant mix of retail would keep the street successful with or without the movie theater.

Speaking as a fan of Landmark Theatres and the movies they book at the Downer and Oriental, I would be horrified to see the Downer close, though I wouldn’t miss the uncomfortable seats. Lord knows, the Downer needs some work. Their recent improvements in the men’s bathroom, I’d guess, were the first such work in about 40 years.

But Ted Mundorff, Landmark’s chief executive officer told the Journal Sentinel that “we…love Milwaukee” and the company wants to stay in Milwaukee.” My guess is that Lee and Mundorff will find a way to make this work without the $2,5 million TIF plan.

Because, while city officials aren’t offering a TIF, Kovac says they are likely to offer other funds for facade and street improvements that will benefit the Downer Theater and other parts of Lee’s plan. In fact the city has previously kicked in with such grants or loans to help with the new Pizza Man development on Downer and for the renovation of Sendiks planned by new owner John Nehring.

But it’s one thing to hand out these smaller sweeteners and another thing to give away the store. If Kovac and Barrett cave in to a $2.5 million demand for one of the city’s most successful retail strips, they would be engulfed with requests by every developer in town.

-Why a hotel on Downer Avenue? My source tells me that Lee has met with officials at UW-Milwaukee and Columbia St. Mary’s and has concluded there’s a need for one to accommodate visiting professors, doctors and others. Lee had a study done which found a hotel with 80 to 120 rooms would be economically feasible.

-D’Amato has also represented the Veolia company, still fighting to win the contract for the Milwaukee county transit system, and the city of Waukesha, which wanted to buy water from Milwaukee. The latter in particular raised eyebrows in City Hall, given D’Amato’s prior skepticism as alderman to selling Milwaukee water to the suburbs.

-Kovac ran for office as an adamant critic of D’Amato and Lee, criticizing the location of the parking complex on Downer (which abuts the home of Kovac’s parents) and the way the project got approved. “For me, there’s a lot of balls in the air, it’s a complex issue because there are so many people involved I have past history with.” But he emphasizes that he wants to do all he can to support Lee’s plan.