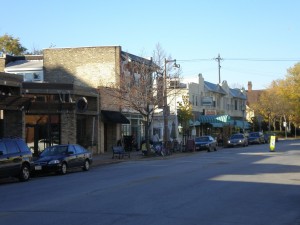 This past Monday night a public meeting was held to discuss possible streetscape improvements to Downer Avenue and a change in the previously approved plan for Downer Avenue.  The change would replace a proposed medical office building with a small boutique hotel.

The local Business Improvement District (BID) and merchants association have been moving forward on a streetscaping proposal that would use $300,000 of funding from the BID and an additional $300,000 from the Department of City Development to improve the pedestrian experience along Downer Avenue.  Additionally, businesses reached out to Joel Lee, of Van Buren Management, to develop the former Associated Bank location into a small boutique hotel instead of the originally proposed medical office building.  Mike Eitel, representing the area businesses, spoke passionately about the urban environment and how there are trade-offs involved in city life, but these improvements will make the area better for everyone.  He went on to explain that the merchants on Downer Avenue. are “really not at the height of our dynamic growth,” and added, referring to the new hotel proposal, that “I think of it as sort of a way to bring Downer Avenue back.”

Scott Kindness, of Kindness Architecture + Planning, presented the streetscaping plan.  He explained that the plan intends to make the street more conducive to local business and pedestrians.  Specifically the plan would include tripling the size of the tree boxes so trees can flourish and the area around them can be planted, bumping out the sidewalk to create spaces for outdoor cafes near the former Bartolotta and Chancery locations, the use of stamped asphalt in the pedestrian crosswalks, the addition of twenty new bike racks, the replacement of the existing pavers with an updated material, and the burying all the overhead wires along the 2600 block of Downer Avenue.

The preliminary designs for the new hotel were presented by Matt Rinka, of Rinka Chung Architecture Inc. He explained that it would have a 20 stall underground parking garage, and that the hotel would be roughly half the size of a standard hotel.  He added that the materials on the hotel building would include limestone precast panels, granite pieces for some columns, and the restaurant would feature large wooden doors to facilitate cafe dining.

Some questions arose regarding the “lack of parking” in the area and residents feared this would increase the problem.  Matt Rinka attempted to explain that if they built this hotel with a parking spot for each room, essentially overbuilt it, “then we’re designing Bluemound Road,” and that this is an urban area so although parking is always an issue it is expected that not all users of the hotel will drive to it.  He offered a tongue-in-cheek remark that to solve the residents parking concerns by adding more parking stalls “we could make this building taller,” which got a big laugh, but apparently didn’t alleviate the residents concerns.

]Joel Lee explained that although financing is not locked in yet, the $5.5 million project is a very manageable level of funding.  He added that the hotel is will be more like an upscale bed and breakfast, and that they have a potential Wisconsin hotel and restaurant operator lined up.  He attempted to summarize saying that “we believe this can get done.”  After a series of questions regarding garbage collection and parking issues he added that “it’s very frustrating and difficult to invest money in the neighborhood that needs it,” because despite the value they attempt to bring to the neighborhood they always face stiff opposition.  He further added that “if you look at the stability of this street it is very weak,” indicating that this new development could help the revitalize the street and local businesses, if it was allowed to move forward.

The topic of Peter Kovac‘s litigation against the City of Milwaukee came up and a some clarity was given on the possible outcomes of the litigation.  For example, it does in fact include language asking for the parking structure to be torn down, though it does offer other remedies as well.  It was indicated by Joel Lee that with the lawsuit hanging over the head of the original hotel proposal, no lender is willing to come in and do a flagged hotel.  Interesting enough, Peter Kovac got up and supported the proposed hotel saying “it’s better than the surgery center.”  He was then quick to indicate it is too tall and needs changes so his support came with conditions, but with the outstanding lawsuit it was unexpected.  He went on to say, referring to the garage, “the architecture is all wrong” and that “we’ve proposed a facade change.”

Near the end of the meeting a resident put Alderman Nik Kovac on the spot, asking him if he supported this project.  He responded that it is “my personal opinion is this is a much better use and design than the previous design.”  Although, at times tempers flared on both sides of the lawsuit, a straw poll of the audience reflected general support for the hotel if some adjustments were made.  This proposal is likely to be schedule for the May 18th meeting of the Historic Preservation Commission, with the intention that it would be on the June cycle for approval at the Zoning, Neighborhoods & Development meeting.  The goal on the part of the developer and the BID is for both projects to break ground in October of 2009.