Reconstruction of I-94 would extend 23% further into city, stretching east to 16th Street, WISDOT says.

By Gretchen Schuldt, Wisconsin Justice Initiative - Aug 30th, 2013 01:35 pm
Get a daily rundown of the top stories on Urban Milwaukee 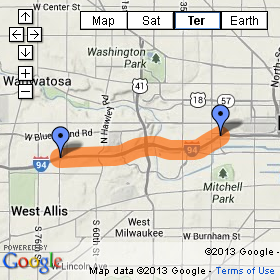 The I-94 East-West Project as presented by WisDOT, before change to EIS.

The Wisconsin Department of Transportation this week quietly moved the eastern boundary of the I-94 east-west reconstruction and expansion project from 25th St. to 16th St., extending the project by 23 percent.

WisDOT’s extension increases the project length from 2.85 miles to 3.5 miles, a increasing it by.65 miles. Cost figures were not included in the announcement, which was made in the Federal Register.

All of its I-94 reconstruction public outreach, including a total of eight public meetings, dealt with a project that ended at 25th St.

Extending the boundaries may bring WisDOT trouble legally on the potential issue of racial discrimination. The population living near the freeway in the area between 19th St. and 25th St. is much more heavily minority than the population living near the freeway in much of the rest of the project area, which extends west to 70th Street. WisDOT will have to explain why the newly affected group of residents was not consulted in the first year the agency sought public input for the project.

Said WisDOT in its Federal Register announcement:  “Public involvement is a critical component of the National Environmental Policy Act  (NEPA) project development process and will continue to occur throughout the development of the EIS (environmental impact statement).” 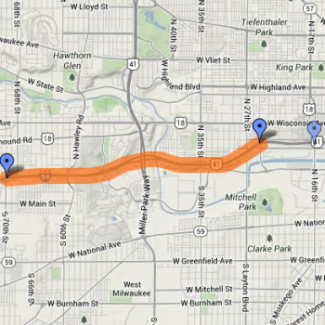 Furthermost right marker represents the proposed new eastern edge of the I-94 project.

The agency said the expanded project area “is in response to additional work necessary east of 25th Street to accommodate alternatives that would tie back into I-94 near 16th Street and better match the recently reconstructed Marquette Interchange.”

WisDOT did not explain why those two things were not considered since the start of the I-94 planning.

WisDOT said it would respond “soon” to inquiries about the expanded project area and has plans for new public outreach efforts.