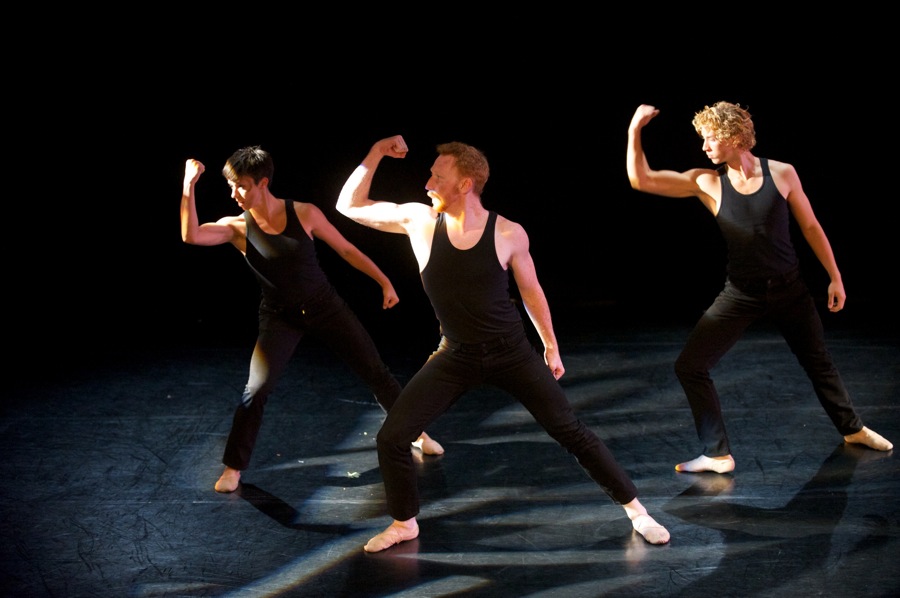 “Love in a Time of War”: Malehorn, Sharratt, Brasser-Vos. Photo courtesy of Danceworks by Mark Frohna.

7. Love in a Time of War, Petr Zahradnicek with poet Chad Piechocki, music by Neil Davis and Seth Warren-Crowe. The choreographer and dancers Parker Brasser-Vos, Rachel Malehorn and Isaac Sharratt are all members of the Milwaukee Ballet.

Zahradnicek has come a very long way as a dance-maker. Recent pieces, and this trio most of all, reveal a new formal savvy and movement imagination. Zahradnicek here stylizes actions of war — stalking, fleeing, cowering, charging, retreating, diving for cover, taking bullets and giving them — into steps and gestures that work as pure dance but hold their narrative meaning. The dance is a bold woodcut, not a romantic painting, and the dancers perform it that way. Zahradnicek presents his elements first in a disciplined little squadron; as the battle against a ghost foe rages, the body shapes evolve and the ensemble geometry breaks down. Night falls, and the combatants sleep and then dream, first in a long solo for Brasser-Vos and then with Malehorn and Sharratt in duet. These passages feel pixilated and out of kilter in the way of dreams, in large part because Zahradnicek couches the steps uncomfortably against the strong musical pulse and because all the dancing is so tightly bound.

I wish I could tell you more about Piechocki’s poem, which begins in haunting voice-over about halfway through this 12-or-so-minute work. But I found it hard to attend to both the dancing and the words, which I’m sure were not in favor of war.

6. In track/shul, Mauriah Kraker writhed like some underground creature striving for the next stage of life. Small trees, uprooted and suspended a couple of feet above the floor of the Danceworks Studio Theater, supported that impression. Brittany Parker designed the set and Kraker’s brief, comely costume. This is about nothing more than Kraker’s sinuous, curvilinear, compelling way of moving, whether on the floor or on her feet. That’s plenty.

5. Perhaps Orada Lelanuja‘s dialogue, heard as voice-over accompaniment to Andrea Hill Johnson‘s Let Me Hear Your Voice, doesn’t sound so moony and adolescent in the full context of the play from which it was extracted. But Friday, it sounded as if it came from a 13-year-old girl’s diary: “I wish human beings were turtles… turtles don’t lie.” “What are you doing here? Searching — What are you doing here? Escaping.”

The exchange was between Hill Johnson (Old Woman Dancer) and Alexandra Bonesho (Young Woman Dancer). They’re adrift on a raft, cleverly evoked by a few tied-together logs. But remember, it’s voice-over; the dancers “speak” the lines with their eyes and yearning faces. I answered with my eyes, which barely stopped rolling.

4. Fastidious neighbor Hilary Anderson, to the tune of It’s a Beautiful Day in the Neighborhood, arranges fallen leaves in little piles that form a neat grid at the outset of Molly Mingey‘s Pine Ridge Cir. Alberto Cambra spins in to the next yard, scattering leaves and arranging his little garden pots in a way that  disrupts Anderson’s arrangement. Anderson gradually turns up the heat of her slow burn, to great comic effect. The happy-go-lucky Cambra remains oblivious and breezes through his moves, lies on his back to enjoy the day, and generally drives his neighbor crazy. But when he exits, he leaves a vacuum of energy. We feel it and so does his neighbor, left forlorn when he takes her life-affirming annoyance with him.

3. Exquisite beauty fills every moment of Floreciendo, by Jose A. Luis with filmmaker Kellie Bronikowski, and Bonnie Watson dancing. Bronikowski made two films of a woodland setting, shown simultaneously on either half of a full-span white screen hung on the back wall of the studio. Now and then, Watson shows up in the films. Soon, she shows up live, in the same lacy sundress she wears in the film. As she dances, gently and lyrically, for the most part, the projectors cast her shadow over the films. The result is a kaleidoscope of ever-shifting relations of the live body, the shadow, and the recorded body on the screen. Sometimes, Bronikowski filmed in extreme close-up; the little hand we see live, for example, appears six feet wide on the screen for while. The dreamy languour of the movement fits the mesmerizing songs, one by Buika and one by Bebe, that accompany it. In a brilliant stroke, the screens go stark white for a few moments, leaving Watson and her shadows to bust the moves allegro.

2. Enormous sheets of white paper cover the stage for Diagram, created and performed by dancer Kelly Radermacher and uncommonly athletic artist Leah Schreiber. Everything they do leaves a mark — on their partner, on themselves, on the paper — starting with the red stickers they paste on one another. In this episode and the several to come, they start in some rigorous rhythm and seem to be systematic. But as the process plays out, they speed up and become competitive, and the system starts to break down. Schreiber spreads powdered graphic on the white field of paper and begins to shuffle her feet and travel through it in a clear pattern. Radermacher works doggedly on circles — around her hands, her feet her entire body. Does the system decay? Of course it does, as speed and passion rise. So the whole piece is a dialogue between the Apollo and the Dionysius, the reason and the disruptive wildness, in every artist. 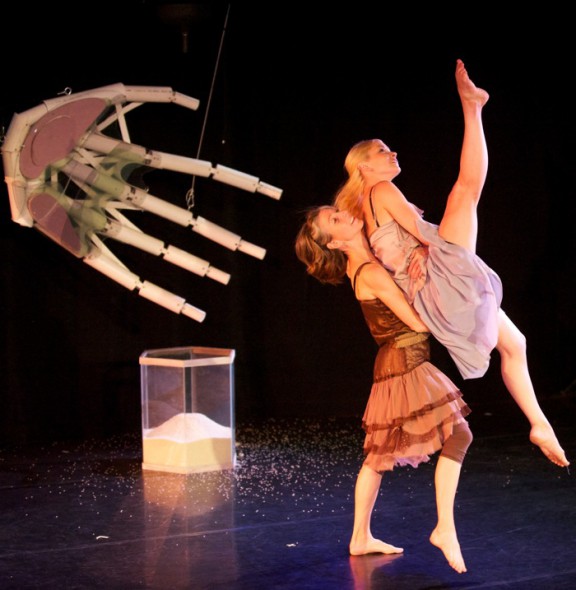 Ott Thompson lifts Marquardt in “Time’s Present.” The hand and sand are nice, but we want to see Xander. Photo courtesy of Danceworks by Mark Frohna.

1. W.C. Fields famously said “Never work with animals or children.” They’ll upstage you every time. Catey Ott Thompson broke that rule by bringing her own adorable toddler, Xander, on stage Friday in Ott Thompson’s Time’s Present. Even though Ott Thompson and Hannah Marquardt are lovely women and lovely dancers and wore very pretty dresses, Xander got all the attention — even more than that giant hand and the Sands of Time.

He’s a happy little ham already, and he’s not even a year old. Xander mugged to the crowd. He gurgled with delight when mom and Hannah flung him about. He’s an adorable dead ringer for the E-Trade baby, but without the sleaze. For a long stretch of the piece, Marquardt and Ott Thompson put the boy down at stage left, to play with the red rubber stars on the floor. The women might have well have sat down with glasses of wine and saved themselves the effort of dancing. All eyes were on Xander.

This program, which sold out Friday evening, will be repeated at 7:30 p.m. Saturday and 2:30 p.m. Sunday at the Danceworks Studio, 1661 N. Water St. For tickets, visit the Danceworks website.