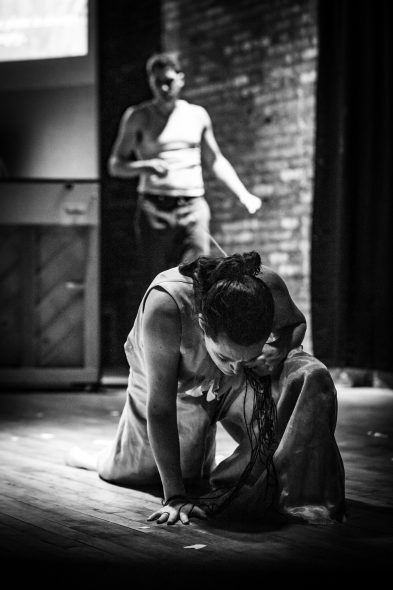 53212 Presents, located above Company Brewing (735 E. Center St.), hosts music and theater performances in addition to acting and dance classes. The main performance space is all wood floors and brick walls, simple but classy. Excited to see a production in this venue, I followed my curiosity to Winter Journey, a theatrical staging of Franz Schubert’s beloved song cycle Winterreise.

The enduring popularity of Winterreise seems odd given its actual content: over an hour of morose, often suicidal musings by a heartbroken protagonist wandering on a winter night. The text, comprised of 24 poems by Wilhelm Müller, wrings dozens of romantic metaphors from the wintry landscape. One might not expect this to produce great theater or even to sustain an audience’s attention, but I found myself surprised and delighted by some of the creative choices. Singer Tim Rebers, actor/dancer Posy Knight, and pianist Maggie Rebers infused human warmth into this chilly work of art.

Tim Rebers offered heartfelt, dramatic singing in his portrayal of the protagonist. The added demands of singing while moving around a physical space (and away from the piano) led to a few moments of over-exertion (particularly in the song “Rest”), but he proved himself physically capable in all of his shared choreography with Knight, and amped up the drama of his interpretation for this theater piece. In the climax of the early song “Frozen Tears,” he reached an intensity befitting the grandness of the line “[My tears] come out of my heart hot enough to melt all the winter’s ice.” I enjoyed his sound in “Flowing Water” as well: a rich midrange tone even while his body was occupied with motions almost like stretch pushups. His knowledge of the music and command of the German enabled a sustained vision from beginning to end.

It became clear early on how much the presence of another character opens up theatrical possibilities for Winterreise. Posy Knight, unconstrained by the limits of the text, was free to portray a huge spectrum of emotion as she depicted both the lover in question and more abstract characters. She proved herself a master of onstage movement, transitioning with ease into even the most awkward positions. Her facial expressions, always fully engaged, hinted at deeper meanings than even the choreography could express. She was great to watch. Her most memorable (and funniest) moment was probably in “The Mail Carriage,” where she hammed it up as a mail carrier with a hat and mustache, whispering funny asides to the audience as she handed out Valentine-themed parcels.

Accompanist Maggie Rebers anchored the performance with straightforward, sensitive playing. I’ve been told that she and her husband have performed this collaboration several times, and that was evident in their secure ensemble and agreement on tempos. If I attended again, I would focus more on her contribution. It was easy to overlook with so much fresh onstage action. The upright piano in the performance space wouldn’t be ideal for some productions, but in this case it lent a casual air, and gentler projection, that I found pretty appealing.

I won’t spoil all the choreography moments in this production, but I want to highlight a few instances. In “The Linden Tree,” a simple blindfold game took on a more melancholy meaning. As a blindfolded Rebers sang about a linden tree, a reminder of happier days, Knight moved coyly around him, tapping, beckoning. At the end, the blindfold was removed, and Knight then took the form of a tree. It was a very intriguing sequence of imagery that made me view the song in a new way. I also loved the mirror reflection dynamic in “On the River”; as the text speaks of the lover becoming distant, we see Knight smirking, mocking, mouthing the words back to Rebers. Other songs made use of extremes of distance and closeness, juxtaposing embraces or standoffish body language with text that often conflicted. In “The Crow,” I saw some ballet inspiration in some of the lifts and pair dancing.

When I was a college music student, I sometimes struggled in art song recitals, trying to absorb both the music and the text simultaneously. But in Winter Journey, the added stimuli actually enhanced my ability to process it all. I’d be captivated by some unusual choreography and think “What is happening in the text?” And I’d look up at one of the several screens to read the translation and make a mental connection. I’d love to see more artists experiment with bringing classical art songs to life in this way. The simple addition of choreography, lighting, and costumes instantly creates a sort of chamber opera.

Winter Journey has three more performances: February 14th and 15th at 7:00 p.m., and Sunday the 16th at 2:00 p.m.. If you love the music of Schubert, creative performance, or if you find yourself lovesick on Valentine’s Day weekend, spend 70 minutes with these talented artists. It’s really exciting to see something like this in the first year of 53212 Presents. The creative team is planning to expand to a black-box space on Holton (the Grand Imagination Theatre), which would further grow opportunities for great art.