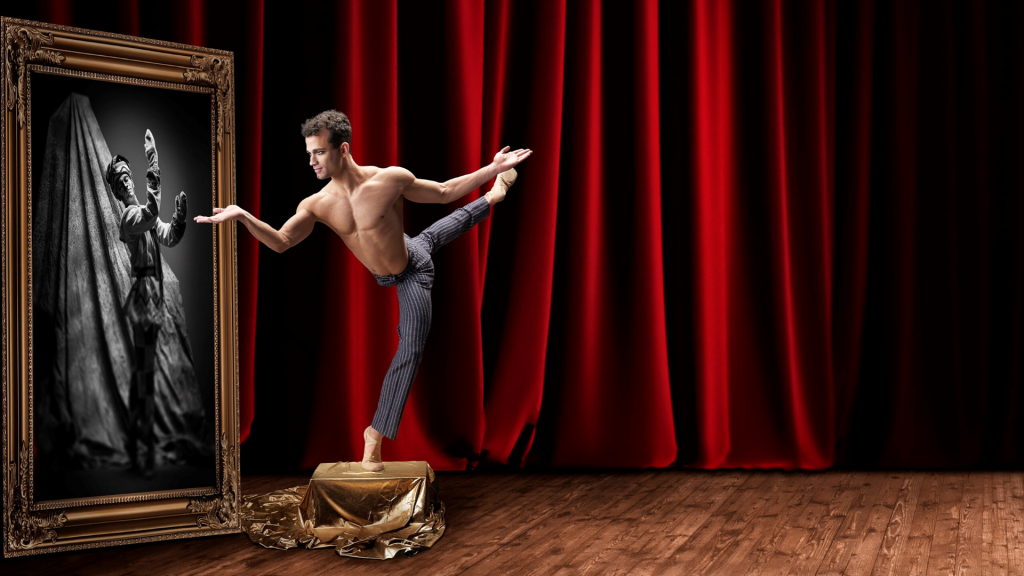 It’s hard to over-estimate the impact of the Ballet Russe, the company based in Paris that performed between 1909 and 1929. Originally conceived by the famed impresario Sergei Diaghilev, the Ballets Russe is generally regarded as the most influential ballet company of the 20th century, which created ground-breaking collaborations of young choreographers, composers, designers, and dancers who achieved greatness. Diaghilev commissioned works from great composers like Igor Stravinsky, Claude Debussy and Sergei Prokofiev, scenic design from top artists like Vasily Kandinsky and Pablo Picasso and costume designs by Leon Bakst and Coco Chanel.

That’s the era the Milwaukee’s ambitious new production seeks to both revive and reimagine. Ballet Russe Reimagined, part of the Milwaukee Ballet’s 50th anniversary season, has commissioned its three choreographers, Timothy O’Donnell, Nicole Teague-Howell, and Garrett Glassman, to explore the incredibly creative world of the Ballets Russes, with modern adaptations of several of controversial composer Igor Stravinsky’s classic ballets, including The Rite of Spring and The Firebird. It’s a bold venture for the ballet, and will be presented this week on Thursday through Sunday at the Pabst Theater

“Ballet Russe Reimagined will be a unique and worthy addition to our long tradition of presenting innovative new work that excites and engages the next generation of dance lovers, and keeps the art form accessible,” Milwaukee Ballet artistic director Michael Pink noted. “The thought-provoking contemporary adaptations of these iconic ballets will truly showcase the creativity of our artists and entertain ballet aficionados and newcomers alike.”

O’Donnell’s Sacre was adapted from choreographer Vaslav Najinsky’s The Rite of Spring. Composed by Stravinsky for the Ballet Russe’s 1913 season in Paris, the avant-garde ballet, based on primitive Russian pagan rituals, shocked audiences when it premiered.

“Stravinsky’s powerful score is known to be one of the greatest compositions of the 20th century,” said O’Donnell. “Relentless and evocative, this score is the perfect base on which to tell a story. It is everything a choreographer looks for in a musical composition. To me, it seems in the wonderful world of the Ballet Russes and its artists, creation led to destruction, love to loss; genius to madness.”

O’Donnell noted that Sacre provided several artistic challenges besides intricate choreography, which includes two complex duets between male dancers. “Finding the balance between, and also the blending of dance to acting, have been the greatest challenges,” said O’Donnell. “This is so important, as I don’t just want people to understand the storyline; I want them to actually feel it.”

In addition to Sacre, choreographer Teague-Howell will present The Firebird, which is inspired by Michel Fokine’s choreography and showcases many women in the Milwaukee Ballet.

“I was drawn to The Firebird because I saw an opportunity to interpret the folkloric aspect of the story into a very human one,” Teague-Howell said. “I wanted to highlight intense connections and emotions by focusing on aspects of humanity that are not always easy to face.”

Glassman will inject a bit of comedy into his adaptation of Les Noces, Stravinsky’s brooding work originally choreographed by Bronislava Nijinska. Glassman’s version of Les Noces is a light-hearted story about a groom-to-be and his friends, and the hijinks which ensue the night before a wedding. “I’ve always wanted to create a piece that involves more theatrical work, as well as a comedic aspect,” the choreographer said. “I hope this piece will be a chance for new ballet audiences to see that dance can be fun and entertaining, and that it’s not just about tutus and tights.”

Ballet Russe Reimagined will be held at the Pabst Theater 7:30 p.m. Thursday, Friday, and Saturday, and 1:30 p.m. Sunday. Tickets can be ordered by calling 414-902-2103 or by visiting www.milwaukeeballet.org. Valentine’s Day packages, along with discounts for groups, seniors, and college students, are available.

Garrett Glassman’s I Do, Don’t I?