As the retail market struggles nationally and the Shops of Grand Avenue struggles locally, it’s time to ask what retail should be in downtown Milwaukee in the next five years. Is it worth investing public dollars in the form of a TIF in Grand Avenue or other mall-like projects downtown, as has been done in the past? Or should the standard be that all retail must interact with the street?

I would argue the most economically sustainable approach, for the retailer, building owner, and the city, is for all retail to interact with the street.  The current alignment however at Grand Avenue is the mall versus the street.  And in case you haven’t been on west Wisconsin Avenue lately, both sides are losing.

The inward facing mall does not benefit from nearby venues, except during the lunch hour when the skywalk sees a stream of individuals head to the third-level food court.  The outward facing street that is the north side of west Wisconsin Avenue does not benefit from the mall located on the other side of the street, as Grand Avenue’s few outward facing stores fail to generate any form of street traffic that would make the area attractive.

The end result is failing stores and empty storefronts.

There is light at the end of the tunnel though.  With Grand Avenue currently on life support, the reality that the current owner, Ashkenazy Acquisitions Corp, is going to be looking for public dollars to support some form of renovation is growing more likely by the day.  This should be taken as a chance to do things right, and orient the mall around the street.  The plan being that increasing the retail availability on the street will certainly increase the values of non-mall properties, but will also strongly increase the value of the mall itself.  If public dollars are to be invested, the city should definitely get a positive externality of reactivity multiple blocks outside of the project itself.

How to achieve a street-based orientation?  Organize the retail locations by the level of impulse involved in purchasing.  The food court is currently located on the third floor, furthest away from the free advertising the street provides.  This should be reversed.  Pot Belly’s should be joined on Wisconsin Ave. by as many restaurants as possible from the food court.

The empty Linens & Things store provides easy space to start, Office Max and TJ Maxx should be reconfigured to be on the second-tier.  Utilizing the stairways that are currently blocked off, Office Max and TJ Maxx could have street-level retail space and a link to a second-level store.  This would allow for coveted street-signage and visibility, as well as a store layout that maximizes the mall’s capacity for street-level retail.

The old food court could become one of many things, but the best bet might actually be a school.  With the large number of charter schools springing up in Milwaukee, and MPS in its ever-present state of flux, I would imagine the surge in downtown Milwaukee residents would warrant a school at some point to serve them.  If not a school, a daycare center or job-training facility might be a nice fit.  The food court space, because of the mall’s skywalk connection, has good direct connectivity to numerous employment centers in the area, which might make young children (and parents) more at ease.  For green space for any youth-focused facility the underused Zeidler Park could be reconfigured.

The lower levels could largely be kept as is, with the notable exception of utilizing what is currently the large holiday season robot band in the first floor plaza space below the food court as a new indoor eating area for the winter.  An open dining space would serve to activate retail spaces inside the mall that see diminished traffic counts because of the move to street-level retail.

The second floor, the further the unit is from an entrance, could be transitioned from retail space into small office and non-impulse retail space.  Dentists, tailors, small financial firms, etc, etc could be more heavily marketed to.  Units near entrances could maintain their function as retail spaces (Old Navy as an example of one in this role already).

At the end of the day, one of the things that certainly needs to change is that more street signage for the individual tenants should be installed.  It should be lighted signage so that it’s visible at night and jumps out.  The mall is on Wisconsin Avenue in an urban area without much in the way of residents on the street, the signage should be nearly something onto itself, like it is in Times Square. 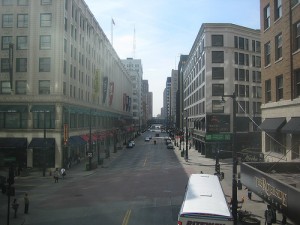 With the redevelopment of the Shops of Grand Avenue you would hope to see increased retail in the other empty spaces along Wisconsin Avenue.  By allowing Wisconsin Avenue itself to be a retail destination, you would anticipate spillover onto side streets that you’re not seeing now.  The massive underutilized of the land on the intersections of Wells and 2nd Street and Wells and 3rd Street would become a prime spot for redevelopment.  Mixed-use buildings on those intersections would further add to the street life of the area.

One thing the area sorely lacks is nightlife.  West Wisconsin Avenue is a ghost town at night.  It would probably be good for more bars to occupy the stretch, as well as simply more businesses that are open late.  The proposed Ghazi development would help this, as would development of empty retail spaces on the north side of the block.  The biggest thing however will be the flexibility to change the hours of mall if it is oriented to the street.  Currently the mall closes at 7 p.m.  A street-orientation would allow the stores to set their own hours, and enhance the safety and vibrancy of the street.

Redeveloping the Shops of Grand Avenue isn’t going to be cheap, but the mall and the street are on a death spiral as it is now.  A wisely done redevelopment could increase the value of all of the properties in the area, and create an organic, market-driven path to future growth in the area.

West Wisconsin Avenue is one of the first areas people often see in downtown Milwaukee.  It plays a crucial role in establishing someone’s first impression of downtown.  We need a healthy and vibrant mix of uses on the block.

1. The mall is failing and will presumably need a public investment via TIF dollars at some time in the near future.

2. Moving the food court to the street-level and orienting it around Wisconsin Avenue will drive up pedestrian traffic, increasing the street life and improving all businesses along West Wisconsin Avenue.  This will also allow businesses to stay open later if they don’t depend on mall access, this will generate higher profits, which means higher rents.

4. The open plaza on the first level that currently is filled by robots playing music could be an indoor eating venue in the winter.

6. The second floor could be transitioned to attract tenants not reliant on impulse retail.  Outdoor signage could be given for every tenant.

7. The increased activity taking place on Wisconsin should fuel growth in nearby under-utilized areas, such as this intersection.  The increased signage should make the area seem a little bit more alive at night, allowing businesses to be open later would help this.