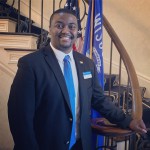 “I have spent my entire career fighting for issues that touch everyday people, especially those in communities that are too often overlooked,” said Walton. “I am ready on day one to bring my personal and professional insights to give the minority and underrepresented communities in our halls of power a fresh voice.

“We need leaders in Madison who will fight to invest in our communities and work toward getting our fair share of the resources we deserve to improve our infrastructure and public transportation, to expand Medicaid in Wisconsin and to make sure that we bring family sustaining, living wage jobs to this district,” continued Walton.

Active in local and national politics since 2004, Walton has worked on numerous political campaigns, including for President Barack Obama and Milwaukee Alderwoman Chantia Lewis. Walton has also spent time working at the Democratic Party of Wisconsin, and both the Governor’s and the Milwaukee County District Attorney’s offices. Most recently he served as the Community Outreach Liaison for the Milwaukee Mayor’s office, focusing on serving Milwaukee’s African American, LGBT, faith-based, veteran, and labor communities.