For the second straight year, Milwaukee set a new record high for the number of people killed by homicide.

There has been a nationwide increase in homicides, of 30% from 2019 to 2020, but Milwaukee’s surge is lapping other cities and undoing two decades of progress.

The number of non-fatal shootings also surged to record levels.

Going back to 2006, the first year consistent data is available, the non-fatal shooting record was 631 in 2015. It’s now at least 26% higher and a month’s worth of data is still yet to be reported.

Gun violence is an issue that hasn’t gone unnoticed by city leaders. Former Mayor Tom Barrett acknowledged it was a challenge the city faced in his final press conference on Dec. 22, but also noted the city made great strides from 2015 to 2019 when the annual homicide total dropped from 147 to 97. During his 17-year administration, it reached a low of 71 in 2008 and averaged 111.9.

The first homicide of 2021 was recorded at 1:15 a.m. on Jan. 1 when a 40-year-old male died following an argument. The second such incident came the next day when a 16-year-old female was shot during what police believe was a business robbery.

Get a daily rundown of the top stories on Urban Milwaukee
“Last night’s shooting death of a 16-year-old girl is a horrible tragedy, made worse by the circumstances the police have shared with me,” said Johnson in a statement. “This victim appears to have been a hardworking teenager with her future bright and ahead of her. Instead, that light has been snuffed out by senseless gun violence. I offer my deepest condolences to her family and friends.”

“Gunfire does not solve problems; it does not offer the protection that people imagine; and, too often, there are unintended, innocent victims. Milwaukee can be a safer city, and an important part of increased safety is stopping those who use guns to show-off, to threaten, or to deal with their problems,” said Johnson.

“This is an all-hands-on-deck approach, we cannot be one group working on this issue,” he said in October, noting the department engages with the Office of Violence Prevention, residents, its own “shoot review” team and others. “I know that there is more to do, but we are leaps and bounds ahead of where we were before.”

According to MPD data, the three largest known causes of shootings are arguments, poor conflict resolution and drugs (either use or sale). When looking exclusively at homicides, domestic incidents and robberies appear in the top three. Norman said the department is seeing a surge in people grabbing firearms to resolve disputes.

MPD said it relies on information from the community to solve the cases. “Obviously in the post-George Floyd era we have been having an issue with police legitimacy in the community,” said inspector Paul Formolo in October. “There is definitely a connection with clearance rates.” Formolo was recently promoted to assistant chief.

City officials regularly hold a January press conference to address the prior year’s violence statistics. The 2020 event had an upbeat tone as totals for the 2019 year were on a sustained downward trend. The 2021 event was the exact opposite, with officials pledging to work together to bring the situation under control.

Johnson, who has repeatedly praised Norman’s leadership, said in late December that he will soon be releasing a plan to address gun violence. He declared reckless driving a public safety crisis as his first act as mayor.

But the plan is already being attacked before it’s released by at least one of his 10 mayoral opponents. “Milwaukee residents are being plagued by shootings, carjackings, a record murder and car theft rate. They can’t wait any longer for a public safety plan that may be nothing more than lip service to a problem that has plagued the city for years,” said former alderman Robert Donovan in a statement Monday.

Donovan also attacked the Blueprint for Peace plan when it was released in 2017.

In January 2021, then-Office of Violence Prevention director Reggie Moore called for following through on the vision of the blueprint. “We don’t have a shortage of ideas,” he said, calling for funding of them.

Some of that funding arrived in October, when Governor Tony Evers announced the state would direct $8.8 million in federal funding directly to the city’s Office of Violence Prevention and $6.6 million to Moore’s new employer, the Medical College of Wisconsin and its violence prevention project.

But the City of Milwaukee itself continues to face a fiscal cliff in 2023 and, due to a labor agreement, will see the size of the police force shrink by 25 across 2022 even as the department budget remains steady. 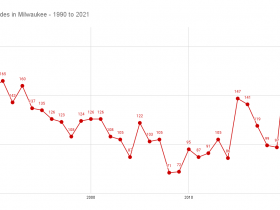 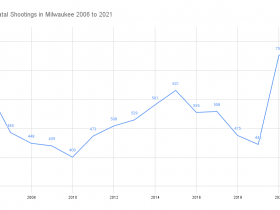 UPDATE: The number of homicides listed in the article was reduced from the widely-reported 197 figure to 194 after publication as a result of new data from the Milwaukee Police Department. Certain killings can be reclassified as self-defense upon further investigation. A vigil held in late 2021 recognized 214 people that died in Milwaukee as a result of homicide, police shootings and self defense.