"There is a tremendous amount of work to be done, and we will do it together," said Mayor Tom Barrett. 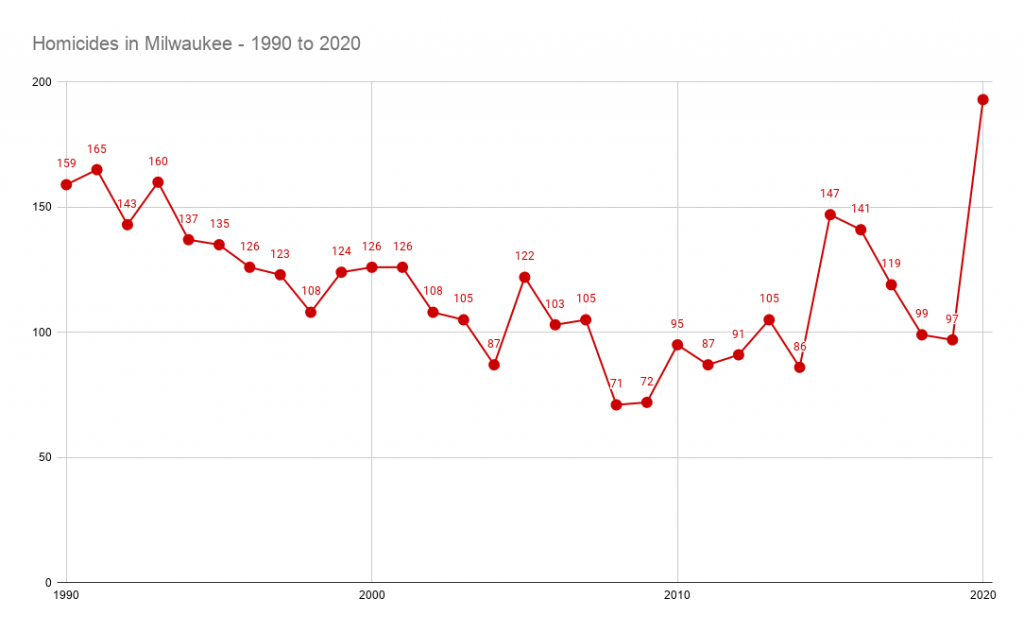 At the start of 2020, Milwaukee officials offered an upbeat tone that the city was getting its hands around a homicide crisis through a multi-pronged approach. From a high of 147 homicides in 2015, homicide totals declined steadily to 97 in 2019.

“We are here not to celebrate, we know that even with the dramatic decrease in homicides there is still too much violence in parts of our city,” said Mayor Tom Barrett in January 2019. “One homicide is one homicide too many.”

But 2020 didn’t go as planned. A mass shooting at Molson Coors left six dead in February. Then in March a global pandemic took hold. The city ended the year with a record 193 homicides.

“2020 was a year all of us never wants to see again,” said Barrett at a somber press conference Friday morning.

“It identified so many holes in our social support system,” said assistant fire chief Joshua Parish of the social isolation. “And ultimately we saw the results to that lack of access in so many horrible ways.” Many cities saw a surge in homicides, but Milwaukee’s triggered to eclipse the city’s record high set in 1991.

“It wasn’t always safer at home,” said Barrett, referencing the state response to slow the spread of COVID-19. “We know that domestic violence is a serious problem in our community.”

The homicide rate obscures the real toll that gun violence takes on Milwaukee. According to Milwaukee Homicide Review Commission data, 691 people were victims of non-fatal shootings in 2020 through December 16th.

“Seven-hundred people are three plane crashes,” said Office of Violence Prevention director Reggie Moore. “If that’s not a state of emergency, I don’t know what is.”

Get a daily rundown of the top stories on Urban Milwaukee
“It is not acceptable and it should not be inevitable that violence occurs in our city,” he said. “And this is not something that one office, one organization, one program can tackle by itself.”

Acting Fire Chief Aaron Lipski said the Milwaukee Fire Department ranks amongst the best in the nation for preventing deaths from gunshot wounds.

“I need to point out to everybody that’s the wrong thing to be number one at,” he said. “I hope everybody understands what that means. There is too much going on.”

“Beginning in the early spring, we saw nearly twice the victims of firearm injuries,” said Froedert trauma surgeon Dr. David J. Milia. He said the toll extends beyond just the victim, impacting the friends and family, and the medical team. “The amount of physical damage we see only tells half the story.”

“We need more people in this community to have the sense that this is a pandemic, just like COVID-19 is a pandemic,” said Barrett.

“There is a tremendous amount of work to be done, and we will do it together,” said the mayor.

Acting Police Chief Jeffrey Norman said the department wants to be part of a multi-layered approach. “The urgency has been laid out,” said Norman. “This is not a singular activity done by one entity, this is a team work approach. The Milwaukee Police Department understands the team work approach.”

Moore called for more investment in the 30 strategies identified in the 2017 Blueprint for Peace plan. The plan calls for a multi-pronged approach, beyond just policing, to address violence. “We don’t have a shortage of ideas,” he said, in calling for funding.

The press conference was held near a billboard advertising one of those programs, 414 Life, at N. 35th St. and W. Wells St. Federal grants provide much of the funding for the program, including paying violence interrupters, community members who deliberately work to deescalate situations in targeted neighborhoods.

“What we haven’t seen is any support from the State of Wisconsin,” said Barrett, calling on the state to contribute resources to allow the city to expand the effort to more neighborhoods.

“I own the fact that we had a bad year last year and we are going to do everything we can to make things better for the residents of this city,” the mayor said.

There is one program that is helping. Crime Stoppers, which provides cash rewards for anonymous tips, was launched in Milwaukee in 2019. Moore credited it with helping solve five homicides and four non-fatal shootings. Open requests are posted on the website and unsolicited tips can be submitted.

“We believe that 2021 can be a better year and that is our commitment,” said Moore. 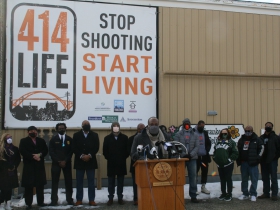 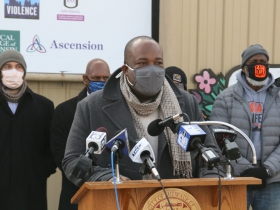 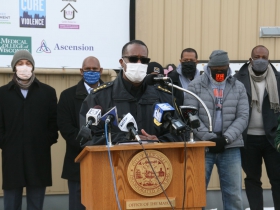 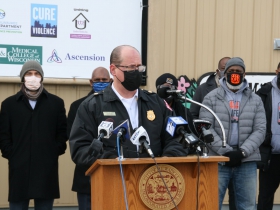 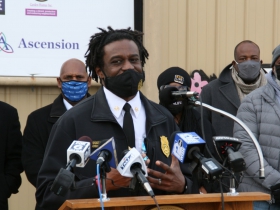 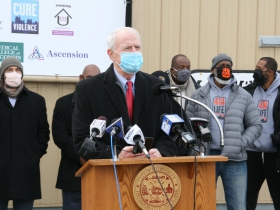