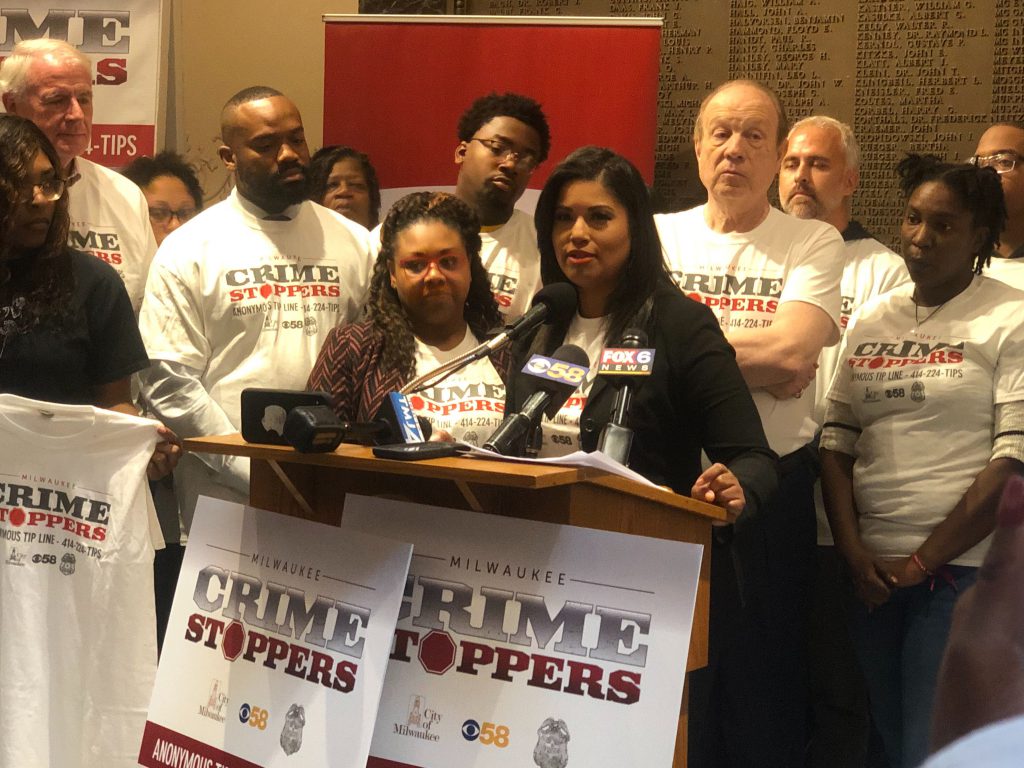 Milwaukee is joining 47 other Wisconsin communities in offering the anonymous Crime Stoppers reporting service to prevent and solve crimes.

“I’m on this side today because I couldn’t hold in the desire to make change that journalists feel,” said Porterfield to the large crowd of media members and supporters in the City Hall rotunda. The Milwaukee native served on the board of Crime Stoppers in Illinois. She said she saw the program work there and wanted to bring it to Wisconsin.

Lewis came to support the effort through tragedy. Her cousin, Phil Franklin, was killed in a hit-and-run crash involving a stolen vehicle on his way home from work and the case went unsolved for a year before the driver was ultimately caught committing another crime and linked to the original case via DNA evidence.

“Milwaukee Crime Stoppers is a tool for people that want to take their community back,” said Porterfield. Individuals are able to call a third-party call center (414-224-8477) or submit anonymous reports via MilwaukeeCrimeStoppers.com or the P3 Global Intel app. The Milwaukee Police Department receives the information, but not any information about the caller.

“This is all about stopping crimes before they occur,” said Mayor Tom Barrett. He singled out a recent incident where residents reported suspicious activity at a W. Norwich Ct. home that led to the seizure of 18 pounds of marijuana, approximately $1 million in cash and more than 100,000 vaping cartridges. “That happens when citizens get involved. It’s not snitching. It’s not meddling. It’s being a good citizen.”

Hupy, whose law firm is one of the funders of the effort, said he was drawn to the program after a number of small children were shot by stray bullets while inside their own homes.

“It’s completely anonymous. I want to reinforce that,” said MPD Captain Craig Sarnow. “Your phone number is scrambled and goes to a call center out of state. We cannot call you back.”

Office of Violence Prevention Director Reggie Moore said the push to bring this to fruition is long overdue.

Individuals reporting crimes will also be eligible for rewards of up to $1,000. A call number is returned by the call center and in cases of an arrest individuals can redeem that number at a bank for the reward without giving a name said Lewis.

The effort is being funded with Community Development Block Grant and asset forfeiture funds as well as private contributions from Hupy & Abraham and others.

A flyer at the event reports that 736,760 arrests, including 15,706 for homicides, have been made nationwide as a result of Crime Stoppers reports since the program started in 1981. The program has distributed over $111 million in rewards and recovered over $4 billion in drugs and property.