Located at 2153 N. Martin Luther King Jr. Dr., the development was first announced in March 2019. It will include an affordable housing complex, a new home for the Greater Milwaukee Foundation (GMF) and office space for the Medical College of Wisconsin (MCW). And now it includes a food hall and early childhood education center.

In Nov. 2019, the Common Council approved a $12.6 million tax incremental financing subsidy to support what was then a $84.5 million project to redevelop the former flagship Schuster’s department store.

But construction hasn’t started, legally imperiling the development team’s ability to access the city financing. And since it was first approved, the project cost has grown and some of the uses have changed, but the city’s financial commitment remains the same.

A key driver of added costs is the increased number of apartments. The original plan called for 77 apartments, with 53 set aside at below-market rates. The new plan calls for 89 apartments, with 74 set aside at below-market rates. “Twenty-seven of those units would be geared towards senior housing,” said Department of City Development economic development specialist Dan Casanova in presenting the revised proposal to the Zoning, Neighborhoods & Development Committee on Nov. 16. DCD supports the change. “It still meets our guidelines for affordable housing for TIF projects.”

Royal Capital representative Terrell J. Walter said the senior housing will be targeted at longtime area residents who are aging out of nearby single-family homes. “They would be better served by an opportunity that has a low cost of maintenance,” he said. It would also support them transferring the property to family members and building generational wealth. “This is their neighborhood.”

Get a daily rundown of the top stories on Urban Milwaukee
Other notable changes are planned for the building’s first floor.

That includes the addition of a food hall for startup vendors. Royal Capital and project designer Engberg Anderson Architects told the Bronzeville Advisory Committee on Nov. 15 that it would include space for one anchor vendor and three to four additional vendors.

The food hall area would be configured as flexible space, capable of hosting community events or private events like weddings.

A childcare and early childhood education provider is being selected via a request-for-proposals process.

“We are hoping to have staff at the site that really brings everything together in a cohesive manner,” said Walter.

The development team credits feedback from area residents as the driving force behind the change. When the project was announced the partners publicly said they would develop the first floor to reflect the community’s desires.

Specific apartments units would be set aside for individuals making below 30%, 50%, 60% and 80% of the area median income. Through the low-income housing tax credit program, those rents are capped at 30% of household income for each income threshold.

The revised term sheet includes a new start date for the project: Feb. 28, 2022. Construction must be substantially complete by June 30, 2023 to access the TIF support.

In exchange for the city support, the project will be required to have 40% of its construction work hours performed by unemployed or underemployed city residents, as well as spending 25% of its construction and supply budget and 18% of its professional services budget with Small Business Enterprises. It will also need to comply with the Anti-Displacement Neighborhood Preference Policy that sets aside units for area residents experiencing displacement.

The city’s contribution to the project would come after the development team has first expended the funds. Following completion of the project, the city’s liability will start to accrue interest at 5.5% per year for up to 25 years. It is during that period that the development team would be repaid in an amount not to exceed the property taxes it pays.

Consistent with the earlier agreement, the $12.6 million would grow to $15 million in the event the property is assessed for at least $45 million.

GMF will relocate from Schlitz Park to the facility. MCW originally announced it intended to locate its community-facing programs in the facility. Together the two partners will lease approximately 100,000 square feet of the more than 350,000-square-foot complex.

The oldest building in the complex was built in 1907 as a home for Schuster’s Department Store and expanded many times. The Gimbels chain acquired Schuster’s in 1961 and operated the store until 1969. It was used as a warehouse by Gimbels (which eventually went out of business) until 1992 according to city records. It was then acquired by CH Coakley. which used the building for storage and office space. Many of the former department store fixtures, including escalators, can still be found in the building.

Much of the 112-year-old complex’s facade has been clad in metal paneling for almost three decades, hiding the department store’s historic facade. A portion of it was exposed in 2015 to assess its condition, with encouraging results.

A new parking garage would be constructed on the southwest corner of the block with approximately 315 stalls. Loading docks would be demolished along N. Vel R. Phillips Ave. creating a new, open-air entry area.

Included in the deal is a warehouse located across the street from the building at 2212-2228 N. Vel R. Phillips Ave. Royal Capital would redevelop that property as a “wellness” facility according to a 2019 site plan.

But Walter, on Nov. 15, confirmed a rumor that a high school could instead go into that property.

“It’s really really premature to talk through any detail there while they’re going through an evaluation phase about where they land,” said Walter of the unnamed school operator. 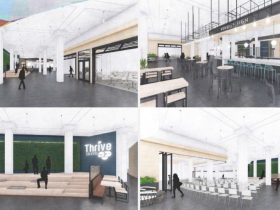