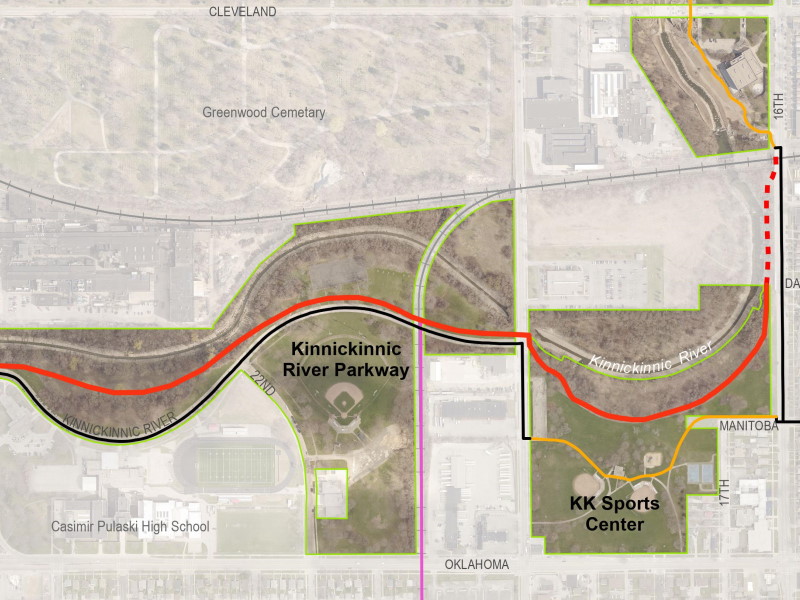 Milwaukee County Parks is planning an extension of the Oak Leaf Trail that will run along the Kinnickinnic River on the city’s South Side.

The extension would run between S. 27th St. and S. 16th St. on the south side of the river and near the Kinnickinnic River Parkway. The estimated cost of the project is approximately $454,000.

The department went before the County Board’s Finance Committee asking for retroactive approval of a grant application and acceptance of a grant from the National Park Service (NPS).

MMSD has been removing concrete lining along the river to better manage stormwater and make it safer for recreation in partnership with the parks department. In 2020, it finished removing concrete from the river in Pulaski Park as part of a park upgrade.

Jeremy Lucas, director of administration and planning for the department, said it is working on the design for Jackson Park, west along the river from Pulaski Park, as MMSD works its way through the concrete river bed. “We continue to move through this river segment and add trails as much as we can along the way,” he said.

The proposed expansion would “connect three existing parks via off-road trail” and provide more bike and pedestrian infrastructure to low income, Hispanic neighborhoods on the South Side, and better connect these neighborhoods to the Oak Leaf network, Lucas said. “Ideally we’d like to get off-road segments all the way through the KK River to the Third Ward where it can connect the rest of the Oak Leaf.”

Get a daily rundown of the top stories on Urban Milwaukee
The county has been looking at ways to increase trail access throughout parts of the county lacking this kind of dedicated infrastructure. It partnered with the city in 2020 to study trail expansion in an area of the city’s northwest side.

The parks department went before the board in July seeking approval to go after federal funds for a proposed expansion of the Beerline Trail. Donna Brown-Martin, director of the county’s Department of Transportation, said work being done by the state Department of Transportation to I-43 in Glendale created an opportunity to expand the Beerline and  “an urban connection within North Milwaukee from Port Washington Road over to Green Bay Road.”

The long term revenue crisis for the parks department and the county has made investments in the parks system difficult, if not impossible. A backlog of capital projects estimated to reach nearly half a billion in the coming years means little money to go around for new infrastructure like bike trails.

Federal grants are critical to the department continuing to invest in and maintain trails throughout the system, with this south side project just the latest example.