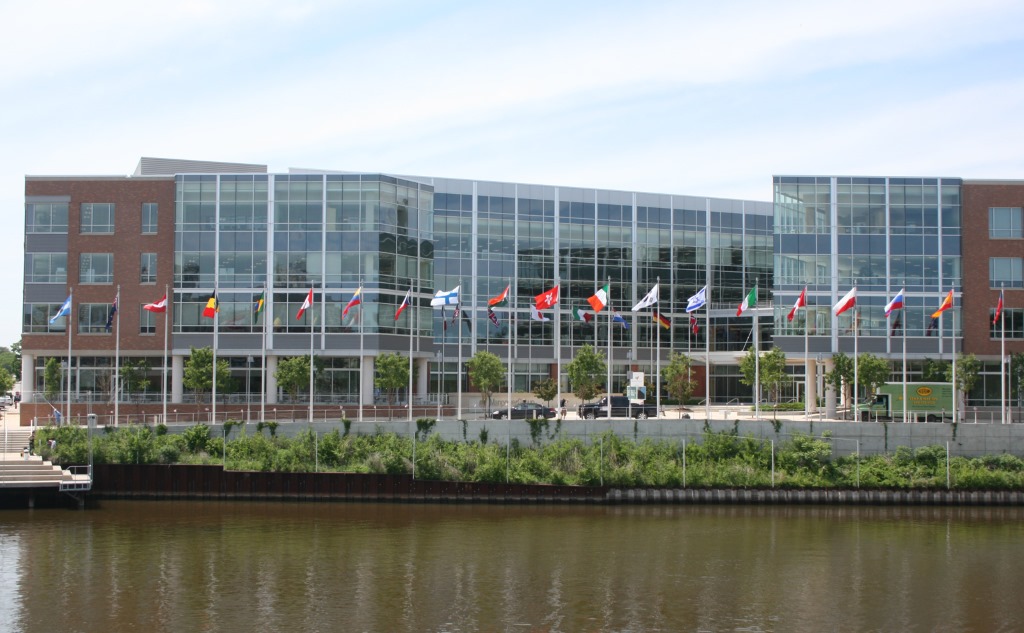 The ManpowerGroup Headquarters building changed hands this week in a $70.43 million transaction.

Colorado-based Real Capital Solutions acquired the property, 201-229 W. Cherry St., from a partnership of Canada-based BentallGreenOak and Kuwait-based Warba Bank. The partners acquired it in 2017 for $66.5 million.

The four-story, 280,000-square-foot office building sits at the southern edge of Schlitz Park overlooking the Milwaukee River and Downtown. At the time of the 2017 sale, the staffing services firm was said to have 900 employees in the building.

ManpowerGroup, the Milwaukee-based staffing firm, has approximately 10 years left on a lease on the building. It has never owned the building, with Brewery Works (the former owner of Schlitz Park) developing it for the company in 2007.

Manpower relocated to the building from suburban Glendale.

The company is the sole tenant of the building, but announced earlier this year that it would consider subleasing up to 80,000 square feet of space as a result of the COVID-19 pandemic changing the office market.

The property, based on a 2020 assessment of $66.7 million, is the ninth most valuable in the city.

Streamlined development policies, new zoning mandates on local municipalities and new housing investment and loan programs are among the provisions in draft legislation that Republican lawmakers have begun circulating.

Rep. Jim Steineke (R-Kaukauna) and Rep. Rob Summerfield (R-Bloomer) gave a broad overview of the draft bills at a press conference Thursday, and the drafts themselves began circulating along with appeals for cosponsors later in the day.

The bills “reflect the conversation that’s happened in the state the last couple of years about the shortage of housing — and the shortage of workforce housing in particular,” according to Kurt Paulsen, a professor in the University of Wisconsin School of Planning and Landscape Architecture and author of a report two years ago for the Wisconsin Realtors Association on housing shortages in the state. “Economic development officials and local mayors across the state are recognizing how much housing has become an issue.”

City Could Issue Citations For Failing To Disconnect Downspouts

Have you failed to disconnect your downspouts from the city’s sewer system?

A new ordinance, currently pending before the Common Council, would give the city the authority to mandate the disconnection and take an enforcement action to complete the work.

It’s the next phase of a Milwaukee Metropolitan Sewerage District requirement designed to reduce the amount of stormwater ending up in the Deep Tunnel system.

Looking for an office building? Need space to launch that next great commercial venture?

The Department of City Development is soliciting offers for a two-story office building at 3953 N. 76th St.

Located just south of W. Capitol Dr., the city acquired the 21,000-square-foot building via property tax foreclosure in 2011 from Makbul Sajan. The property includes a 30-stall surface parking lot to the north of the building.

The MAC is back… soon.

The Milwaukee Athletic Club will reopen in its longtime home at 758 N. Broadway on Dec. 31. The club has been operating out of temporary space in the CityCenter at 735 building for nearly three years because of a delayed top-to-bottom redevelopment project of its longtime home.

The project includes a new space for the private club within the 12-story building, as well as a public restaurant and 54 apartments. A partnership of J. Jeffers & Co. and Interstate Development Partners is leading the $62 million effort.

In November 2018, then-County Executive Chris Abele spent $2.6 million to buy a historic 9,762-square foot Eschweiler-designed lakefront mansion on Lake Drive in Shorewood, with the intent, he said, of living in the community. The 1927 home had three fireplaces, eight bedrooms, five full- and two half-baths. Although the finishes were elegant and of the highest quality, as befitting a home built for the Uihlein family, its infrastructure was antiquated and in need of considerable repair and updates.

By May of 2019, Abele created a stir in the village when he announced his plans to tear the entire structure down, and to construct a 17,000-square foot mansion in its place. He applied for a demolition permit on May 30. By that time he had already begun dismantling the interior, with its effects being donated to Habitat for Humanity, as I reported at the time. Despite last-minute efforts to save the building, which was not protected with a historic designation, the permit was issued and the home was razed that summer.

But today, nearly three years after he bought the home, no construction has occurred and the permit has been canceled.

“There’s way more homeless out here,” Willie T., a 63 year old man who lives, unhoused, near King Park told Wisconsin Examiner. Willie didn’t want his last name published, but still offered his insights on what life is like for those living in a growing tent community in King Park on Vliet Street. Ranging from 16-20 tents, depending on the day, it has steadily grown since 2019.

Although many members of the King Park tent community mingle among themselves, Willlie does not. He prefers to set up his nightly spot away from the park and other people. Remaining aware and being careful are paramount when you’re living on the street, he says. Even so, Willie stresses that “all homeless people ain’t bad people.”

2022 Assessment Process Could Be Chaotic

Next time you appeal the property tax assessment on your home, make sure to address it to the Award-Winning City of Milwaukee Assessor’s Office.

The department was given a Certificate of Excellence in Assessment Administration award by the International Association of Assessing Officers this summer.

And if things go as expected, lots of people are going to be mailing the office in 2022. The real estate market remains red hot and for the first time since 2002, Milwaukee has gone a year without a citywide reassessment. People are likely to be in for a shock when their new home value arrives.