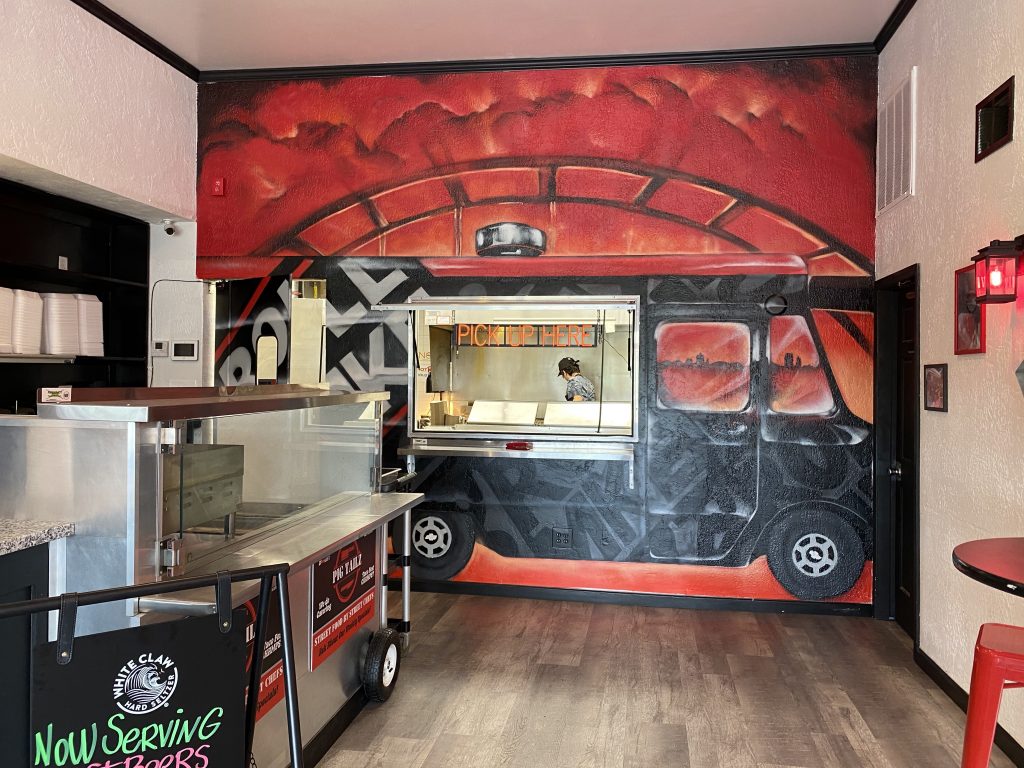 There was a time when it was hard to find a restaurant that served tacos on Brady Street. Cempazuchi filled that niche until they closed in 2017 leaving a taco gap until Kompali Taqueria moved into 1205 E. Brady St., the former home of Cempazuchi. Now Brady has three restaurants where tacos star on the menu, Taco Stop MKE at 1414 E. Brady St. in the strip mall by Walgreens, Kompali, and The Truck Stop at the corner of Brady and Van Buren.

The menu at The Truck Stop combines the foods served in the owner’s food trucks, Pig Tailz MKE and RollMKE. The restaurant is small, just four red high tops with shiny red stools but, this will soon change. A black curtain prevented me from looking into the adjacent room however, I remember that room from the former occupant, Dancing Ganesha, that closed in 2007. When the city permits line up, it will more than double the size of The Truck Stop according to co-owner Justin Kling. Currently, he plans to open the room to the public on October 16 and at that time the room will also become available for private parties.

The Truck Stop’s 9:00 closing will soon change to accommodate late night activity on Brady Street. As Kling said, “We close at 9:00 and that’s when Brady comes alive.” He plans to remain open until 3:00 a.m. Friday and Saturday nights for late night dining when he will remove the tables and stools and serve a limited menu, mainly tacos.

Inside the restaurant, set up to resemble a food truck’s street side, you order at the bar and pick up at a window into the kitchen. While you wait you can enjoy a beer from a short list of six that includes Eagle Park Loop Station, Spotted Cow, and City Lights Coconut Porter, all priced at $5.00.

The menu features burgers and sandwiches from RollMKE and tacos from Pig Tailz MKE. On my first visit I asked Raeden Kling, son of the co-owner, for a recommendation. Without hesitating he said, “The Korean Tacos are popular and so is the Brisket Grilled Cheese.” The Korean Chicken Tacos won our votes. Grilled chunks of chicken were crisp from the fryer but not greasy; a sweet slaw topped the chicken along with crunchy pieces of deep-fried onion; and the sesame aioli made them sing.

After a night of drinking on Brady, the Brisket Grilled Cheese on 9-grain bread would be a logical choice. It oozed fat to soak up the booze, mainly from three cheeses, cheddar, provolone, and muenster. Caramelized onions and braised brisket added heft, and tucked in between the cheese and the meat there was arugula, a healthy green addition to this decadent sandwich. It came with chive fries, fresh from the fryer and sprinkled with dots of green, colorful, but the green dots neglected to add any chive flavor to the fries.

When I returned on another day, I asked again for recommendations. Different counter person, same suggestion: Korean Tacos and Brisket Grilled Cheese. Apparently, these are the big sellers. Instead, we ordered Braised Pork Tacos and Loaded Fajita Fries, the runner-up recommendation from the employee who took our order.

The Braised Pork Tacos with slaw and BBQ sauce were surprisingly spicy, an unexpected pop of heat in this BBQ taco. The slaw mingled with the meat which created a duet, hot and cold, crunchy and juicy.

The Loaded Fajita Fries were meant to share. We ordered “small.” There were more than enough for two. People who like poutine will love these poutine-like fries smothered with American cheese sauce. The dish included a drizzle of chipotle cream sauce, which was attractive, but lacked chipotle flavor. Underneath there was pico de gallo, tender pieces of grilled steak, red pepper and sweet onion, cheese sauce, and on the bottom, chive fries. This was a four-napkin, knife-and-fork meal, a happy combo of multiple flavors and textures held together by the dominant cheese sauce, another dish for the post-party 2:00 a.m. munchies.

Vegetarians will find Sweet Potato Portobello Tacos and Buffalo Cauliflower Tacos to their liking, while vegans will need to look somewhere else, unless they want to remove the queso fresco from the Portobello Tacos.

Saturdays you can order a Breakfast Burrito from 11:00 a.m. to 3:00 p.m. and anytime you can enjoy a craft beer or a can of White Claw, an alcoholic Seltzer. Starting on October 16, The Truck Stop will serve a full brunch on weekends including Mimosa’s and Bloody Mary’s.

Co-owners Justin Kling and Jordan Stewart have come a long way from where they started with one taco truck. Let’s watch to see where they go next, because there will be a next step by these youthful entrepreneurs. 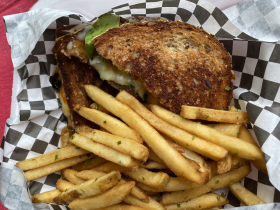 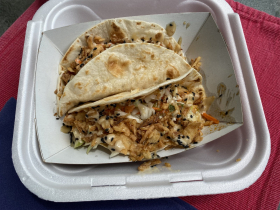 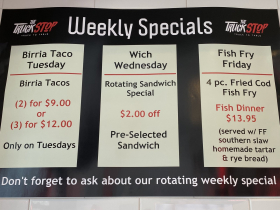 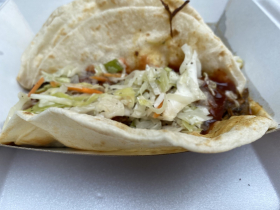 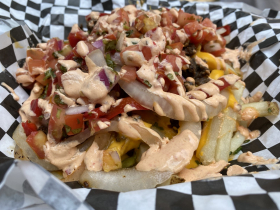 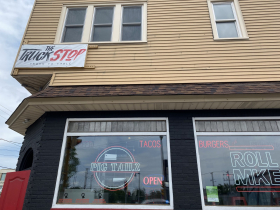 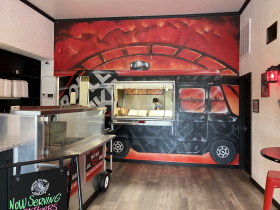 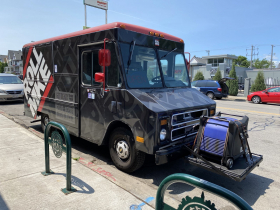 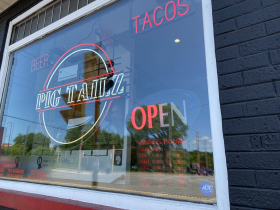 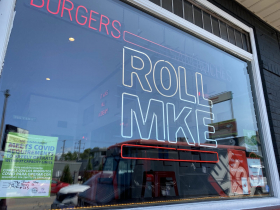 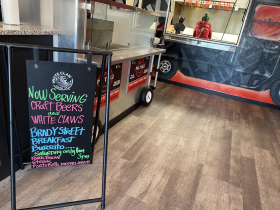