A 1% sales tax would have generated new revenue for parks and public transit. 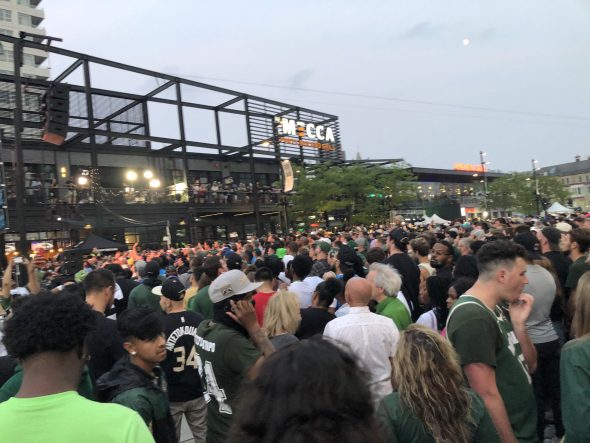 This year was the first time Milwaukee celebrated a professional sports championship in 50 years. The 1971 NBA Championship occurred in the midst of a major transformation in the way Milwaukee area folks got around. Buses were running on old streetcar lines, MCTS would not be created until 1975, and the many freeways that currently bisect the area were not yet completely constructed. In fact, just a year after the Bucks won its first NBA championship, the expansion of the Park freeway was halted by local opposition. In 2001, this section of freeway was torn down to help stimulate a Downtown revival and reconnect Westown with neighborhoods north of Downtown. The place where jubilant fans celebrated the Buck’s Championship victory is the former site of the only stretch of Parkeast Freeway that was actually built. Yet, Milwaukee missed out on a major opportunity in all of this fun and frivolity,  additional tax revenue from a 1% sales tax that would support county parks and the public transit system, which is essential for moving workers and fans to and from the festivities.

In 2008 Milwaukee County voters supported a referendum to increase the county sales tax by 1% to fund transit and parks but the state legislature never followed through and approved this proposal. Over just the 11 home playoff games this year alone Milwaukee County missed out on an estimated half a million dollars in additional revenue. In 2020, Governor Tony Evers put forth a proposal to allow municipalities across the state to enact local sales tax increases based if approved through local referendums. The proposal was marked “dead on arrival,” by the Republican controlled legislature.

In 2015, the state legislature, Milwaukee County and the City of Milwaukee bet on the future of the Bucks by approving a $250 million funding package to replace the 30-year old Bradley Center. These public dollars covered around half of the price tag for the Fiserv Forum, and may be an understatement of the true cost to taxpayers. At the time, then representative Mandela Barnes described this investment as “the biggest opportunity we have to move our city forward and ultimately, move the entire state forward.” While this investment may appear worthwhile to the casual fan, even Bucks president Peter Feigin acknowledged recently in an interview with  the Milwaukee Journal Sentinel that the success of the Bucks and Fiserv Forum are “not a magic wand that solves everything but it can certainly be a catalyst to thinking about renewed investment.” With the cost of operating Milwaukee’s award winning park system and Milwaukee County Transit System continuing to rise while funding remains flat or is at risk of decreasing, this is a moment for the Bucks success to be a catalyst for investing in the people of Milwaukee and the region.

Since the Bucks were crowned NBA Champions, retrospective accounts of Milwaukee’s time in the limelight thanks to the Buck’s playoff run have largely failed to ask any substantive questions about the public events. One Journal Sentinel article specifically indicated that the fan turnout during game 6 was proof that Milwaukee “has the infrastructure to host 65,000 fans safely.” Yet the article fails to list what specific infrastructure was key to make it all happen. Perhaps the most important unasked question is: how did the hundreds of thousands of people who traveled downtown over the playoff run get there?

The Journal Sentinel and the Milwaukee Business Journal triumphant account boasts that the Bucks’ success will encourage more companies to locate here and attract more young professionals thanks to the spotlight on Milwaukee. But, a “do business here” and “live here” because Milwaukee is a “world-class” city message does not blend well with a “don’t ask us” about how Milwaukee is governed. The Milwaukee region has many positive attributes of being “world class.” What is missing, above all else, is an all-hands-on deck commitment to social justice and a governance environment that moves forward from the divisive legacy of city folks against suburban folks, Milwaukee versus Wisconsin, and driving my car versus a high-quality, multi-modal system.

When a region is not able to ensure the future viability of a transit system 21,000 households currently rely on to grocery shop, get to medical appointments, and get to work – what kind of a “world-class” city is Milwaukee trying to be?

Giannis, Khris, Jrue, and Bobby exemplify a kind of hard work mentality that is a core part of Milwaukee’s blue collar past and present, however Milwaukee is more than a mass of hardworking employees. What the success of the Milwaukee Bucks shows is that the people of this region have history here, are proud of the place they live in, and are yearning for more reasons to celebrate and embrace the things that make it great. We deserve effective governance from the powerful people who run the place and not simply a reminder that we work hard to make Milwaukee’s economy attractive to future residents. With national media focused on the Bucks and the lively fan experience around the Fiserv Forum, the reality of an urban neighborhood being rebuilt out of the former Park East Freeway is closer than ever. But this attention does not address the real problems experienced by Milwaukeeans just as drawing a few new young professionals or businesses to the area won’t make Milwaukee “world-class” by any objective standards.

Milwaukee’s future will be just as bright as the Bucks’ if the region joins together in supporting Milwaukee’s future. Giannis will continue to bring people down to the Fiserv with awe inspiring sports play while the people of Milwaukee will bring the building to life. Those same people will benefit most from dedicated funding for a modernized multi-modal regional transit system, the Milwaukee County Parks System, and honest regional interdependence. Robust transit across Milwaukee will reduce transportation costs, improve air quality, and reduce congestion, while also enabling access to good paying jobs. A sales tax increase in Milwaukee County should be uncontroversial because voters have already approved it, and the benefits go directly to stabilizing and improving two of the most important quality of life and economic drivers in the Milwaukee region, the Milwaukee County Parks and the Milwaukee County Transit System. Thanks to the bet on the Bucks – Giannis, Kris and Jrue will continue to put Milwaukee on the world’s radar long into the future. Now it’s time for the state legislature to show their same faith in the rest of the people of Milwaukee.