Pickleball Courts Installed Under I-794 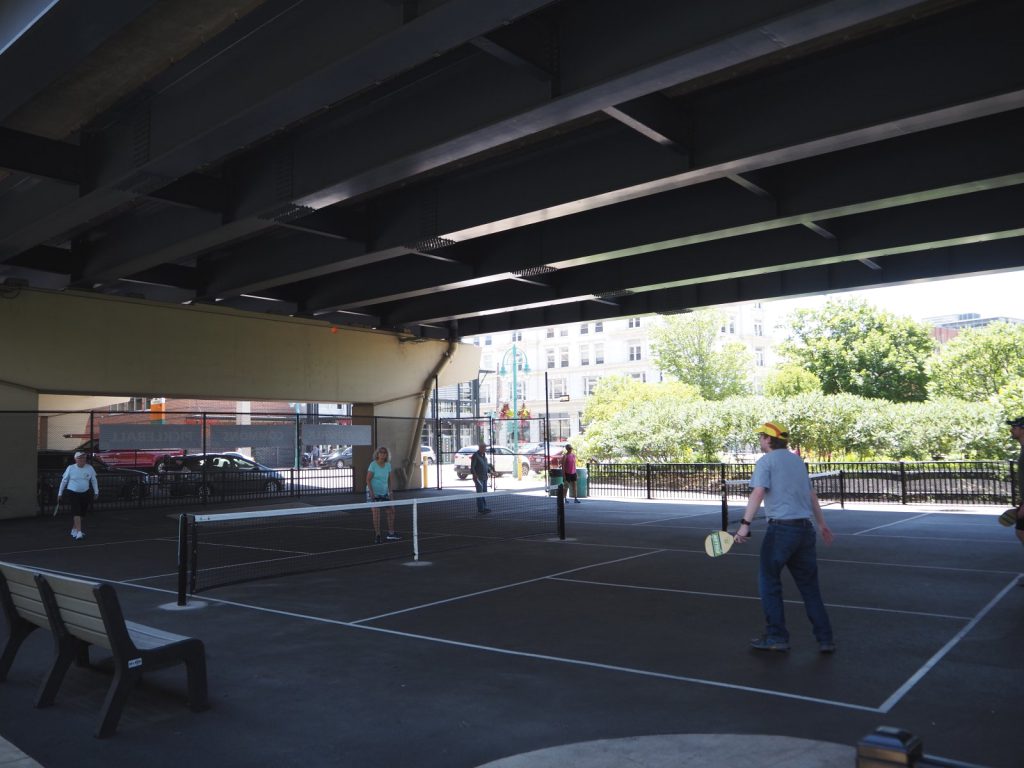 The pickleball courts under Interstate 794. Photo by Angeline Terry.

Add pickleball to the list of free, public amenities in the Historic Third Ward.

Pickleball courts were recently installed underneath the elevated Interstate 794 freeway. The courts are on the western side of N. Water St. overlooking the Milwaukee River, just south of E. Clybourn St. The installation was led by the Milwaukee Public Market and Business Improvement District #2.

Paul Schwartz, executive director of the Milwaukee Public Market, said that since its opening on June 5, the courts have been more popular than he imagined.

Despite the sport’s name, pickles are not a part of gameplay. The game is named for a dog beloved by one of the sport’s inventors. It’s played with a plastic ball that weighs less than an ounce, and its rules are similar to those of tennis. Also like tennis, it can be played in singles or doubles and involves hitting a ball over a low net.

The game is one of many pastimes that boomed in popularity during the pandemic, experiencing a 21.3% growth rate from 2019 to 2020, according to USA Pickleball.

Players interested in using the new courts, but lacking pickleball equipment, can borrow from the management office located on the second floor of the Milwaukee Public Market. If it’s their first time, or it’s simply been a while since they last played, the office will also provide them with the rules of the game.

Players can rent equipment from 10:30 a.m. to 7:30 p.m. Monday through Friday with a valid driver’s license or government-issued ID. The courts are open from 6 a.m. to midnight daily for players that have their own equipment.

For now, the courts will be available on a first-come, first-served basis. Though, it’s possible that the court will have scheduled play or tournaments in the future.

The project is part of the Brighten The Passage initiative, first included in the city’s 2010 Downtown Plan, that calls for activation of the space under the elevated freeway to lessen the perceived barrier between Downtown and the Historic Third Ward.

The Historic Third Ward Association held a design competition in 2012 soliciting designs that would help improve the pedestrian experience walking under I-794. Since then, the freeway was rebuilt and the under-freeway block of N. Broadway gained lighted murals while the N. Water St. segment received pickleball courts. A dog park is planned for the west side of the river.

“The freeways are here and they’re here to stay,” Schwartz said. “So how can we best utilize them and make them a better part of our urban landscape at the street level?” 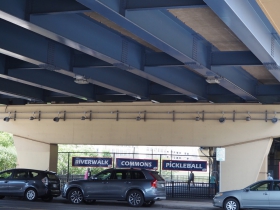 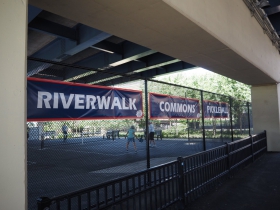 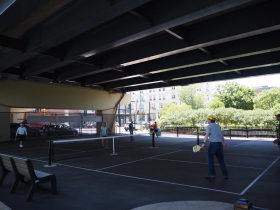