Activists Reflect on a Year of Protest

By Isiah Holmes, Wisconsin Examiner - Jun 3rd, 2021 12:09 pm
Get a daily rundown of the top stories on Urban Milwaukee 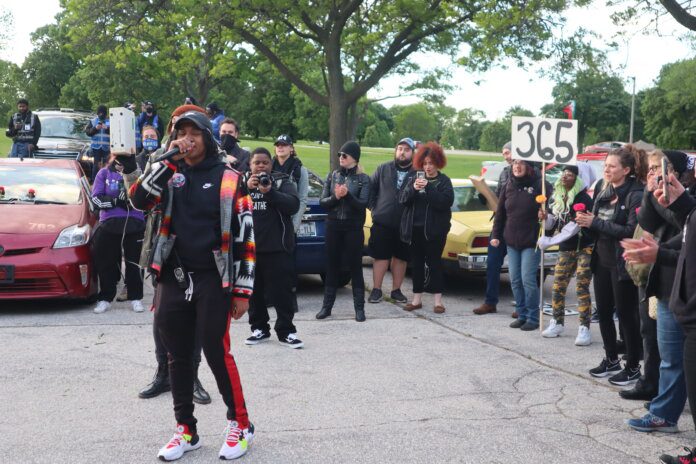 A year ago, countless people across the country and the world took to the streets to express outrage at the killing of George Floyd by a Minneapolis police officer. As the weeks and months continued, the movement in the streets adapted, endured and evolved strategies to achieve policy changes in policing. In the Milwaukee area, the results are mixed.

The longer the protests went on, the more citizens learned about local instances of police-related violence, which fueled more protest. Now, half-way through 2021, some organizing groups which took part in the 2020 protests have had time to look back and assess what came of a year in the streets.

“I think that we are still all over the place,” Keisha Robinson, an organizer with Black Leaders Organizing Communities (BLOC), told Wisconsin Examiner, “we have quite a ways to go.” Angela Lang, BLOC’s founder and executive director, made a similar observation in a recent op-ed. Lang paid particular attention to the slew of policing bills pushed through the Wisconsin Legislature. Ultimately, she and others fear the bills are lackluster gestures rather than policies responsive to the public’s demands.

“Instead of merely putting use-of-force policies online, I want to live in a world where there is no use of force at all,” wrote Lang. “Drug testing officers sounds good but it’s not solving the actual problem. The task force recommendations include more school resource officers. Time and time again our young people and organizations like Leaders Igniting Transformation have said we don’t need more school resource officers or security guards; students want things like more guidance counselors.”

Robinson added that some aspects of the policing bills undermine “parts of what we’re fighting for.” The policing bills were designed as a bipartisan package of bills, built with input from the Speaker’s Task Force on Racial Disparities. They hit on a wide landscape of policing policies, from pushing for more transparent data collection on use-of-force incidents, to restructuring Milwaukee’s Fire and Police Commission, to outlining officer whistleblower protections and increasing localized community-oriented policing strategies like COP houses.

It’s not just the legislation coming in the wake of the protests that has triggered mixed feelings. Several things shifted over the last year since the protests began. Early on, as a result of the Milwaukee Police Department’s (MPD) use of violent crowd-control tactics, the department was denied a new purchase of chemicals like tear gas by the city. MPD’s use of less-than-lethal munitions and armored vehicles also prompted inquiries by the Common Council. Later, Alfonso Morales was demoted from his position as Milwaukee’s police chief by the FPC. Recently, the commission also voted to ban chokeholds without exception.

As the protests also moved to neighboring Wauwatosa, protesters faced more surveillance and violent tactics by local police. A year later, the officer whose three fatal shootings triggered the Wauwatosa marches is no longer employed by the department. Barry Weber, who served for 31 years as Wauwatosa’s police chief, retired on June 1. Weber’s department has also been compelled to begin a body camera program for all officers, ban the use of chokeholds, and neck restraints after pressure from protesters and the city government. Between both MPD and Wauwatosa, open records requests have also helped shed light on how police enforced and surveilled protesters.

Nevertheless, many of these changes came with a catch. Officer Joseph Mensah, whose three fatal shootings over a five-year period triggered the Wauwatosa protests, found a new job at the Waukesha County Sheriff Department. Morales’ position also got caught in a tug-o-war between the courts and the FPC, with a judge restoring him as chief in December, 2020.

There is no permanent chief in Milwaukee yet, and it’s unclear who will become the next chief of police in Wauwatosa, although currently Jeffery Norman serves as the acting-chief. Meanwhile, many of tactics which officers used to identify and target supporters of Black Lives Matter have not been restricted.

In some cases, Robinson felt the activist community acknowledged and celebrated victories during the last year. “Some places you saw we have a win,” she said, “and then with other departments it was like a step back.” Robinson added that the results of the months of struggle can be hard to judge because, “it’s still all over the place.” While some small shifts were made through struggle in the streets, others were taken into the halls of local and state government.

One bill, outside of the legislative package of policing bills that garnered criticism, seeks to de-certify officers to prevent job hopping. Both that, and the issue of qualified immunity, gained more attention as a result of the protest movements in the area.

On May 28, protesters with The People’s Revolution (TPR) gathered to march and celebrate the one-year anniversary of the Floyd-inspired demonstrations. TPR has organized actions including marches and call blasts to local elected officials every day since late May of last year. It’s one of many groups that grew out of the 2020 protest movement. Before taking to the streets on day 365, one of its marchers, Kamila Ahmed, talked about the transformative effect of the movement.

“The thing about the revolution this whole entire year that sticks out to me the most is the education,” said Ahmed. “I learned so much from everybody out here. I learned about the law, I learned about my rights. And that is what’s most important, because when you know then the people around you can know, because you can be the person who teaches them.”

Ahmed joined TPR and other activists in the Capitol on May 27, the day before the one-year anniversary of the marches, to testify on the policing bills. Ahmed spoke during a session focusing on AB-335, which would require the Department of Justice to award grants to police agencies they could use to purchase body cameras for their patrol officers.

However, when Ahmed spoke, to deliver a set of police-related demands she was shut down by Rep. John Spiros (R-Marshfield). “You’re giving demands that this committee doesn’t need to listen to,” he said, “what we need to do is get back to the bill.” Moments later Spiros pounded his gavel and adjourned the hearing.

Thinking of the many people who have been killed during police interactions, Ahmed said to her fellow protesters, “There’s a lot of other names that have not received justice. And part of justice is also changing the laws. If we can’t be out here in the streets saying somebody’s name, at least we can say some legislation. Do you feel me? Because nothing is going to change if we’re just out here saying ‘justice for this person.’ That’s not changing nothing. That’s not doing a service to these families.” She added, “Marching is one thing, but the real revolution is when we change the laws for real. And we need that right now. Because if there’s anything that this year done taught me, it taught me that nothing changes in an instant.”

Legislation is often the fruit of that gradual change. Looking at many of the policing bills before the Legislature, Robinson says that “these things should have been in place already.” Through that lens, Robinson questions how much meaningful change will really come from the legislation that’s currently on the table.

“The change needs to come from the dynamic of police departments as a whole. The code, not calling out bad actors, and stuff like that,” she said. “The police are frustrated because they feel that the community relations aren’t getting better or the community hates them. You want crime out of the communities, you want the citizens to come together so that we can stop the crime but you’re not instituting that within your own department.”

Robinson feels that some elected officials are trying hard not to rock the boat. “They’re voting [on] what’s comfortable to those around them,” Robinson told Wisconsin Examiner. “Their actions are appeasing to officers, and appeasing these people rather than the community.”

She fears that some elected officials “are with the people until they get into a position of power. Most electeds these days, what I’m seeing, they’re voting in favor of the police to make themselves secure. It’s like they kind of stop listening to the community’s demands.” Regardless, organizers like Ahmed and others remain defiant.

“You can’t make decisions without hearing us,” Ahmed said, “and that’s how we got to start moving. Every decision they make, they need to hear from us. All of us, every single person throughout this community from the most marginalized person on to the top. They got to hear us.”

Victories and troubles during a year of protests in the streets was originally published by the Wisconsin Examiner.